My take on the game is that Missouri has an SEC caliber defense. They have been very good defensively and I am not surprised we had some issues on offense. What really bothers me is that Missouri had one of the worst offenses in the country, a very inexperience quarterback (and not very good either), and we allowed them over 400 yards in total offense. They got 13 or 20 third down conversions, and nearly 40 minutes possession time. The BYU offense actually averaged 5.2 yards per play but they couldn’t get on the field. The defense allowed Missouri to control the ball and eat the clock.The defense lost the game plain and simple. The offensive production was about what I would have expected given the caliber of the defense it went up against but the defensive performance was way below expectations given who it was playing.

One of the newspaper articles says the defense played well and the offense lost the game. I think it was exactly the opposite. The offense certainly wasn’t good but our defense should have shut them down and then the offensive production would have been good enough. Connecticut did a better job defensively against them than BYU did and Missouri had their experienced QB playing at the time. That should not have been a difficult offense to shut down unless they suddenly played better than they have all year because they were out to win one for the Gipper (their sick coach).

Our rep is that if you have a sick offense or your QB us underperforming, just play BYU and that will solve your problems. The Missou game was just another example.

There were a lot of mistakes, in fact the targeting call was sent to the review committee and they acknowledged it was a bad call. Interesting that they conferenced on that one for quite awhile and still got it wrong.

Would you provide a source for that comment, Jim?

It was the right call and there was Targeting.

Here is where I read it.

I know you will come up with some reason why I’m wrong or what is “really going on” to dispute it. 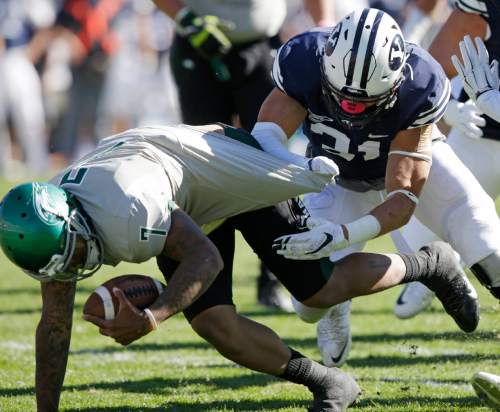 BYU football: LB Sae Tautu will sit out first half for targeting that wasn't

Maybe I shouldn’t believe everything I read… after all it is the Tribune. Go ahead and read the whole article and you be the judge

So, if I got this straight, the officials and the replay booth said it was targeting. Bronco appeals, and the CFO says that it was an improper call and no helmet to helmet hit occurred.

Apparently it wasn’t clearly a helmet to helmet hit since even the officials (on field, replay and CFO) can’t agree on this.

We live in a wimpy, pansy world. The QB got pushed in the chest and Tautu had his head down when he pushed him. Unless you have arms like a T-Rex, your hands are going to make contact way before your head does. That is what happened and it was clear enough for the CFO people to agree with Bronco. The weird thing is… they are still suspending him for the first half of the game even though they admitted it was wrong. It won’t matter vs. Fresno State but it’s still wrong.

LOL who cares-Officiating is a constant good, bad or indifferent. You can’t tell me that the home teams don’t get some calls that they wouldn’t get on the road? It’s called human nature and anyone can be influenced by screaming fans or personal bias. The point is-good teams win or thrive despite adversity and BYU needs to go into these types of games with a mind-set to dominate and kick someone’s behind. Until this happens we are going to see the same old story. I have seen a lot of questionable targeting calls and I believe the ones that need to be called are the obvious ones. I have seen so many calls reversed this year it almost seems like every other one sometimes. So I’m not going to watch games and blame the officials-it is what it is-just hope BYU can get to the point where they feel like they are the big guy and not the little person trying to impress.

all I hear are crickets…

What there to say Jim? You think you are right and I am wrong…

The NCAA denied the appeal (per Desnews), Poppinga says it was not helmet to helmet, which I thought strange because of the angle of the camera I watched, it was pretty clear the helmet hit first and that is why the official called it.

There may have been another angle, that was more clear that we did not see and the NCAA was able to see it… that is a possibility…

So you will believe what you want, I will go on what I saw, what I know about the Targeting rule and believe that most officials try to make the right call without bias…

I guess it doesn’t really matter. We both read things that contradict one another. I think the most important thing I can take away from this is that there are a variety of opinions and you can’t believe everything you read, particularly if it shows up on the internet.