So happy to be on the W side of a big win. Grateful that Hall is healthy. Anyone know how many injuries we had from the game last night? That stat will define our season!

Anyone realize that BYU only converted 3-17 third downs, that is a damning stat, how we won…We won on Baylor killing themselves on penalies.

Too bad Oregon laid that stinker with Georgia last week, Oh what could of been.

Oregon bounces back into the top25 this week after laying 70 on E. Wash. at home so here is what we know: They go to now #1 Georgia and manage only 3 points. Georgia 49-3 OU. Then they play a patsy at home. So we know very little.

Oregon’s best weapon by far is Sr QB Bo Nix, transfer from Auburn 19-20. Without pressure, against E. Wash. he completed 89% of his passes so needless to say, BYU has to get pressure. The great thing about our game with Baylor is that BYU not only was tough on the run but we sacked the Baylor QB 4 times and kept the heat on him all game long.

Games are won and lost in the trenches, as AGIII said all game long…he expected Baylor to march on down the field as they did last year but BYU seems to have that figured out. Now, if Oregon goes hog wild with their pass game, how will BYU respond? Nix takes risks and gets picked so we will see.

BYU has played a tougher schedule, but Oregon is at home, advantage OU
QB -Hall by his legs and he is going to throw for over 300 in the Oregon game, mark it.
Recievers- BYU by a mile. if Ronmey and Nacua play.
Oline- have to go with Oregon because we have not rushed well.
Defense- easy call, BYU
Special teams, Oregon because BYU could not find any more ways to lose a game!

Good analysis.
We’re ranked 12 and UO is 25th, but they are favored. Lots of Duck money in Vegas.

It feels like a “trap game” for BYU. Who would’ve imagined that before the season!

No, Oregon isn’t a trap game. That’s not what a trap game is with a power 5 team. Wyoming could be one. Rankings don’t always have much to do with betting. It’s really about match ups and depth and speed. The odds say Oregon’s speed will dominate. And that it’s their home game as well. I still think we can stop them enough and score at will on them.

Of course not a true “trap game” my point was I’m sure there are some who are “let’s just get done with Oregon - we are much better than they are, and get to the other big games” Tell me you don’t think some aren’t thinking past Oregon given what’s happened the first 2 games. Nobody will admit it though. (I am looking past just a little bit actually, gotta say!)

I think Oregon’s speed will give us some problems - Baylor got to the edge consistently, but we managed decently well just passed the edge I’m sure they’ll be practicing our tackling angles this week. Oregon is capable of blowing us out. This is now a huge game for them to be relevant this season.

Oregon has my full attention on several accords
They are at home and BYU rarely plays well on the road
P12 refs. Just how many Baylor points were left in penalties? I count 17. That could happen to BYU considering we have beat 5 straight P12 teams in a row and EVERYBODY in that league knows it, feels it in their bones

Pray for Nacua to be healthy. Romney as well but with Roberts, things are not so critical.

This is a bit off topic, but does anybody know why Chaz Ayou isn’t playing? Is he injured? I know he was a big recruit out of high school.

What about the big nose tackle Mahe? I haven’t seen him play yet this year. Is he injured or is he just not part of the rotation? He played a lot last year.

I think Oregon is as good as we are. And, the players know this and won’t be unprepared. We too have speed this year in the DBs and LBs. We will have to put pressure on their QB as well.

This is a bit off topic, but does anybody know why Chaz Ayou isn’t playing? Is he injured? I know he was a big recruit out of high school.

yes, AU is injured. I don’t have specifics, i will ask Tom

Here’s the depth Chart for Oregon.
I don’t trust it.
lists Batty, Nacua and Romney as the 1s. BYU is mum on their injuries

How much is Oregon paying BYU to visit Autzen Stadium? Will Ducks return the game in Provo? (msn.com)

P12 refs…was afraid of that

Here is the latest from FOX Sport Picks:

This primetime, non-conference matchup in Eugene will be a rock fight between two teams that pride themselves on their physical play.

Oregon bounced back against Eastern Washington after being embarrassed by Georgia. BYU smoked South Florida in Week 1 and then had an impressive overtime win against Baylor in Provo last weekend.

However, I’m taking the under in this game, and I’ll explain why.

Right now, Oregon does not trust quarterback Bo Nix. It’s clear by watching the game-plan design and the Ducks’ lack of faith with him on third down. They would prefer to run the ball and avoid situations where Nix needs to be their offense, even though their skill position players are far more talented than the BYU secondary pieces. On paper, Oregon should move the ball through the air, but that is not what they want to be right now.

BYU has a quarterback they trust in returning, Jaren Hall. He’s off to a fast start in 2022, with 522 yards in the Cougars’ first two games. They are relying on him to produce more offense than last season. In 2021, Hall only made 296 pass attempts and rushed for more than 300 yards for the Cougars.

For this weekend, we have to consider this. BYU’s leading receivers are injured, and their statuses for this contest are currently unknown. This means that the impressive start from Cougar running back Christopher Brooks, averaging 6.4 yards per attempt, should be a focal point of BYU’s run-heavy game plan against the Ducks.

Oregon’s defense would prefer teams to run into their two heavy hitters at linebacker. If BYU does attempt to throw the ball, Oregon has a lockdown corner in Christian Gonzalez. Oregon’s head coach Dan Lanning took more interest in the defense last week, so I believe the performance against Georgia is in the rearview mirror.

I do not foresee tons of points in this game. Two run-heavy teams with good front sevens. One team doesn’t trust its quarterback, and the other is without its top receiving targets.

Both teams scores will be in the 20s.

Nacua should be back. Robert’s and Hill and will be fine. It will be a difficult game because it’s in Oregon. But, we are experienced and out DBs are very good.

If memory serves me, the last time BYU played in Eugene, Oregon decided that the artificial turf needed watering “right before the game”… Which BYU players had a hard time playing on.

Wondering this the field will be watered down again?

For this weekend, we have to consider this. BYU’s leading receivers are injured, and their statuses for this contest are currently unknown. This means that the impressive start from Cougar running back Christopher Brooks, averaging 6.4 yards per attempt, should be a focal point of BYU’s run-heavy game plan against the Ducks.

of the 3 injuries, I am hearing that Nacua is a game time decision. Romney, I am hearing that he is not injured, that it is some other issue, honor, grades, who know. not here to pass on any rumors, just what a reporter has observed. I would expect Nacua to play.

I do not foresee tons of points in this game. Two run-heavy teams with good front sevens. One team doesn’t trust its quarterback, and the other is without its top receiving targets.

I stand by my prediction of 30 points, based on 2 points: Baylor was the #2 line in all of CF. Oregon’s line is even mentioned in the top 25, also gave up chunk plays to E. Wash. so I think we can run the ball as well as pass on them. Secondly, BYU just has better players at key positions. Oregon does have a nfl talent at receiver but so did Baylor. Oregon has a lot of youth at DB so we will see.

If memory serves me, the last time BYU played in Eugene, Oregon decided that the artificial turf needed watering “right before the game”… Which BYU players had a hard time playing on.

Wondering this the field will be watered down again?

Yup, Personally I worry about two things, Oregon is about as tough at home as BSU is on the smurt turf and of course, I don’t trust P12 refs.

One last thing: I was on the Oregon forum looking for insider info and ran into this nugget:

Seems that Bo Nix has a bad habit, can’t talk about it til after the game and I have watched him play to see if he does it. If I know about it, I’m sure the coaches are on to it 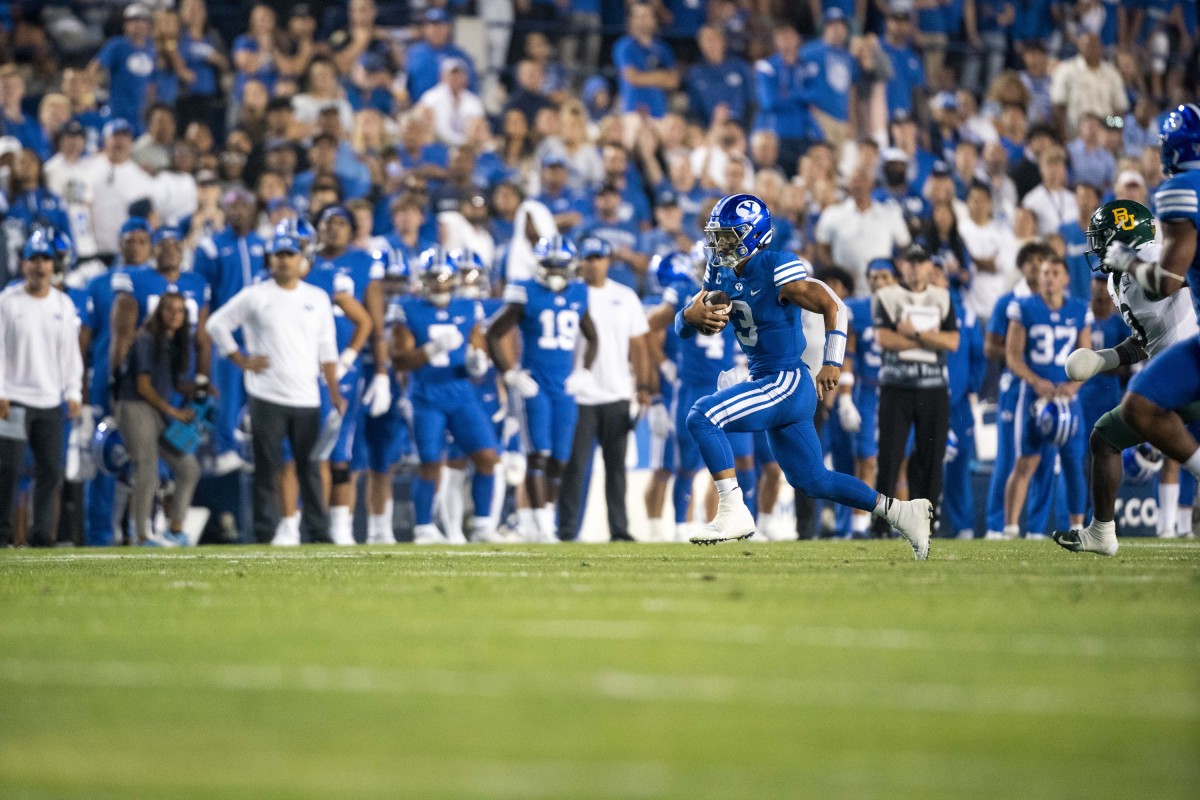 There are plenty of reasons to be confident that BYU walks out with their second straight top 25 win. Here are a few.

I think we lose this one, for a number of reasons. Some we can control, and some we can’t.

It’s hard to go undefeated (we’ve only done it once), so the annual lofty hysteria about “going all the way” Cougar fans always get into should be tempered (not that anyone here is doing that).

I would still be thrilled with a three loss season with this schedule.

I also expect us to struggle to get the Stanford monkey off of our backs (we’ve never beaten them), even though on paper we should. They play the games for a reason.

Speaking of history, Marc Wilson played 3.5 weeks after appendicitis back in 1978. Today, he’d have to sit out 3 months. Nacua is ready to play. So is Romney. Today’s athletes are babied way too much. We can win this game. 45-17.