Basketball who on BYU BB will dominate the middle?

Who will be the post players for BYU next season? Do you think any of them will be able to dominate defensively and score consistantly on the offensive side of the ball?

basically the team next year is the same as this year with the following exceptions
Austin, Collinsworth, and Fischer gone
Mika, Haws, Dastrup off missions
Bryant and Hamson off redshirts

Bigs next year look to be the strength of the team…though with RM’s who can really say.

so at Center
Kaufusi
Mika
Hamson

Unusually it looks the the guard line will be a bit pressed for players
Emery will be back
Brig will be off his red shirt Rose is really high on him (Elijah Brigham Bryant)
Chatman looks to be solid scoring with being the defensive stopper
TJ Haws will be back off his mission
Toolson may be back?

Don’t forget Jakob Hartsock. Like to see him play more which he can shoot just like his brother Noah but better.

Jakob Hartsock
David Guinne
and
Brian Shaw
are the others on the roster.
They all play forward but are not primarily paint players.
I suspect that they will be competing with Yoeli for minutes because he’s not likely spending much time in the paint given that it’s crowded and he can shoot the three.

Jakob Hartsock is a player on the fringe of irrelevancy in my opinion. He came in with pretty high expectations because of his brother Noah. Noah developed into a great player for BYU. He played tough defense and is #2 all-time in blocks for BYU. He started with a solid mid-range game and then added the 3pt shot in his last year or two. He wasn’t flashy or super athletic. No thunderous dunks to speak of but he was a crafty player and a consistent scorer. As a freshman, Noah averaged 11 minutes, 0.6 blocks, 2.4 PPG, 58.1% shooting percentage and 59.3% at the free throw line. His senior year, he was 84.2% at the free throw line, 58.9% shooting percentage, 16.8 PPG, 1.6 blocks, and he added the 3 pt shot (34.3%). As a freshman, Jakob is averaging 7 minutes, 0.1 blocks, 1.7 PPG, 28.2% shooting percentage and 30.3% from the 3 pt line. Noah learned to take good shots and always shot above 55%. I haven’t seen that in Jakob so far. Jakob thinks he’s a 3pt shooter so he spends a lot of time on the 3 pt line. At 6’8", he could be a real match-up issue from 3 pt range but he just hasn’t impressed with his range so far in games. Unless Jakob can really elevate his level of play and become much more efficient on offense, I don’t see him having more than a minor role next year.

hartsock shoots 3s because that is what Rose has him do. IN any other program, Hartsock would be playing at small forward getting plenty of 10’ jumpers.

Rose at some point has to establish an inside game or be resigned to a one and done record and 2nd place in the WCC into perpetuity.

The format next year will be lone peak plus 2. TJ, Emery and Mika are going to get most of the minutes.

I know that Elijah is tabbed to be the starting point but that will most likely be split once TJ gets some experience. Childs has to be getting time as will Dastrup.

Since Rose loves a 3 guard rotation, I would like to see Bryant, TJ, Emery along with Mika and Childs. Rose will never do it but I would also like to see Mika out in the “Pick and Roll” getting easy dunks from any of the guards.

I did not see Hamson at practice the week…wonder if he is even with the team.

You’re right about that. Maybe Jakob is knocking down those shots in practice and that’s why Rose has him playing on the perimeter. I liked Noah’s game a lot, especially his efficiency on offense. I’d like to see Jakob model his game after Noah but maybe Rose has other plans.

One of the recent Coach Rose shows on Tuesday night JP was on and mentioned specifically himself and by the coach how Jakob (JP) is such a great three point threat. Given his size if he could come of the bench next year the way Seljaas did this year he would get some solid minutes.
He would have the advantage of experience of Childs even if he doesn’t have the talent advantage…

Here is an interesting article on Alan Hamson:
http://www.heraldextra.com/sports/college/byu/basketball/men/hamson-legacy-continues---alan-will-walk-on-at/article_a8cc11cc-a41d-5c95-a70d-8fe00962f858.html

Alan has scoliosis and had surgery before his mission. The article says he was 7’ before surgery and 7’3" after surgery. He would have been 7’6" had he not developed scoliosis. Alan has a 7’6" wing span. Bottom line, at 210 lbs and his back condition, can he play division I bball? I guess they will evaluate at the end of the season. 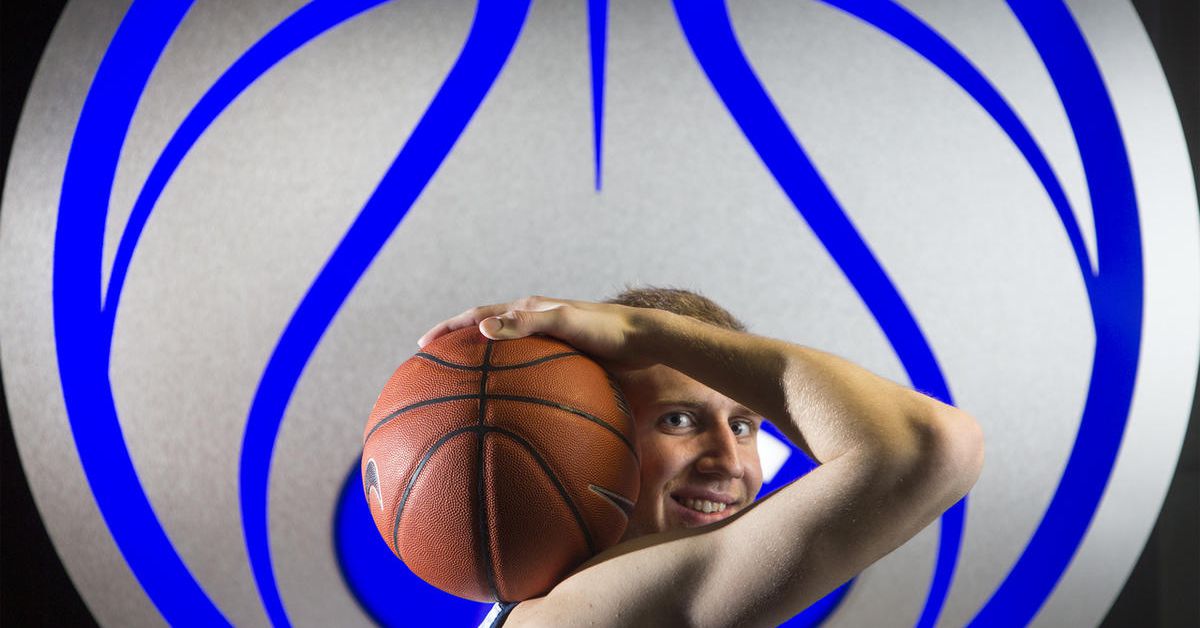 As BYU returns here for the WCC tournament, it also marks the return of freshman forward Jakob Hartsock to his old stomping grounds. A year ago, he was wearing a white shirt, tie and a nametag while serving as an LDS missionary in Las Vegas.


I still wonder how his role will develop under Rose. He admits he is struggling with that issue right now. He states that he prefers more of a perimeter game compared to Noah but in my opinion BYU really needs more of an inside presence like Noah brought to the team. The frustrating thing is that Jakob says he has the same fade away shot that Noah used so effectively at BYU. Great, why not use that part of your game more? I wish Rose would encourage Jakob to model his game after Noah. You have to make room in the rotation for a guy that shoots better than 55% from the field and can give you 14-20 pts every night.
Harold March 4, 2016, 6:02pm #12

with his size shooting well from the outside, which is what Rose appears to prefer for his future, he should create mismatches against every team in the WCC. and most teams in the nation…the experiment with him as starter was aborted but if you go back and look at the games he played minutes in you’ll see a bit better how the two of them envision his future…assuming it doesn’t change of course…but given the bigs situation for his time at BYU I wouldn’t count on it changing.

I’m sure you are right. However, being the armchair coach that I am, if Jakob can consistently knock down that mid-range fade away at 55%+ like Noah, I’d take that over a 3 pt shot at 30%.

Having a 6’8 guy outside shooting 3s make no sense whatsoever. Guards can out quick him on fast breaks. It puts him in a place where he can’t rebound.

But having a mid range guy who can rebound and can also hit a consistent 3 is very valuable.

I forgot about Beo who might actually be able to help some
http://www.tri-cityherald.com/sports/high-school/prep-basketball/article65721027.html

averaging 6.1 rebounds and 4.4 assists as a senior in addition to nearly 27 ppg