Today’s teleconference was quite enlightening. Did anyone else listen? If not, the transcript can be found online. The one thing that seemed really clear to me is that they are looking to have new conference members added for next season.

I’ve heard a lot of speculation that BYU and Boise might be targets as football only members, while adding two other full members to the conference. This would avoid BYU’s no Sunday play rule, and include the best non P5 team football team of the last decade. I would prefer that BYU gets included as a full member, but I would take football only over no invite.

I also suspect that the board members know very well who they want to invite at this point, and are really looking to see what kind of buy in deals schools will agree to.

What say you? Do you think they would target BYU as a full member or football only? Other takeaways from the teleconference?

Here is a link to the recorded audio and transcript. 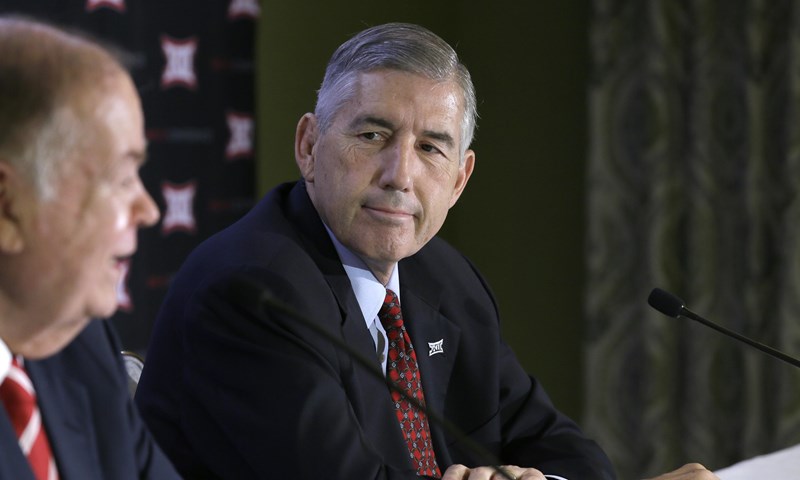 Following the conclusion of its Board of Directors meeting on Tuesday, July 19, the Big 12 Conference will hold a teleconference.

I believe they would only target BYU as a football member. The no Sunday play issue would be too much for them to accomodate. I think that is about as good as it gets and until BYU starts doing a little better (as in winning titles) in the WCC, there is no reason to believe that they should move into a more competitive conference.

I agree that football only would be the easiest fit since few college FB games are on Sunday anyway. Do college FB and the NFL try to respect each other’s turf? Saturday and Sunday play in other sports helps athletes avoid having to play during the week which interferes more with college classes. From a secular point of view, I see why having the Sunday option open is preferred by many programs. That said, I do wish we could get basketball and football into the Big 12. It would help elevate our recruiting effort in both sports.

Jim: “BYU starts doing a little better (as in winning titles) in the WCC, there is no reason to believe that they should move into a more competitive conference.”

WCC in basketball? Gonzaga is the King of the Hill joke. And WCC small gyms and worse of all - “Referees”! Don’t listen to SG.

Sure, make sense when comes to BYU Sunday Rules. Football make sense but would be nice to add Basketball like Glen said. If not, then we should have no problem getting more non conference games with Big 12 mostly basketball if we are just invited to Big 12 Football. WAC/MWC wasn’t too bad in basketball when comes to refs but wcc, no way. That last line “Competive Conference” - which is better WCC or MWC? We had UNLV, NM, SDSU, Wyo, CSU & u were very competitive compare to wcc, so why stay where we are at? I rather move on to Big 12 Basketball too. SDSU did very well with the Jayhawks didn’t they last two year?

Lastly, will our BOT will okay the move to join Big 12 if invited?

That said, I do wish we could get basketball and football into the Big 12. It would help elevate our recruiting effort in both sports.

It “might” help the recruiting effort, but when most of the recruiting for basketball takes place within a 50 mile radius of Provo, probably not. BYU has college basketball prep Lone Peak and it appears that is all they really need as players are moving to that area just to play basketball and prepare themselves for BYU.

Likewise, because it is so important to beat out Utah for all the recruits in that state, BYU doesn’t venture outside much for football either.

Are you suggesting that a move to the Big 12 would help get players from outside the state of Utah? In football it just might, in basketball I’m not so sure.

Playing football in a P5 conference and having a conference championship to play for every year will help recruiting IMO. Utah just had their best recruiting class ever according to some of their coaches. Ten of the 12 PAC12 schools (including Utah) had higher rated recruiting classes than BYU and we just had one of our better recruiting classes. We just beat Washington State and Colorado. So yes I do think the reason Utah is now landing higher ranked recruiting classes than BYU is partly because they are in the PAC12. If BYU played basketball in BIG 12 venues, I do think we would recruit better talent vs the WCC. Yes, a lot has to do with the coaches and the institution, honor code, etc. but P5 affiliation will only bump our program up a notch due to the ability to draw better recruits.

I’m guessing that if BYU is playing in Big 12 gyms as opposed to WCC gyms, they will get the high profile LDS recruits that seem to prefer playing in the higher profile conferences (Parker, Jackson, etc.)

Do you think the reason Parker and Jackson went to Duke is because BYU plays in HS gyms? I am willing to entertain the idea that players of that caliber would come to BYU if the Cougars were playing teams like KU, OU and others but I don’t believe that is the difference maker. Why are all of the LP guys playing at BYU when they supposedly could have been at one of the P5 schools playing in Big 12 gyms? or ACC or Pac 12…

I’m not sure that is the difference maker.

I sort of view that recruiting class rating stuff with a very large grain of salt. I don’t think relying on the Utah coaches for evaluations of their own recruits is accurate and we all know that the ratings are based on a variety of factors, only one of which is the ability of the player. How much money the conference brings in, how many subscribers to the particular recruiting service there are and other factors that have little to do with the actual talent and ability of the player.

We have had this discussion many times before and I have never been satisfied with the conclusions.

I think it is one of the reasons. As for the LP players, I suspect that most of them played at LP because their parents moved to the area for the purpose of keeping them close to BYU with the hope that they would go there. It’s like a couple of the basketball magnet schools in Maryland when I lived there. Those kids were not born in the communities where the schools were located, their parents moved them there, based on the school’s reputation for putting kids into the local ACC schools.

As Jarom Jordan says, “wake me when its over, whenever the Big 10-erh ah the Big 12 expands.”

I agree, I am tired of this whole tiresome comedy. I will have interest when The Big 12 makes a definite decision.

Well, I’m in Houston, is that close enough to reach you when I need to wake you?

Big 12 venues for basketball would be a lot more fun than the WCC venues but Big 12 entry for basketball is not as important as for football since both give access to the NCAA tourney. I do think the ticket proceeds would be much larger due to larger crowds for games at Big 12 arenas. Football recruiting would get an up-tick once we become a P-5 school.

After several seasons of hope and suspense and waiting, etc… I for one am through. The Big 12 couldn’t make an expansion decision if the life of their conference depended on it; which it very well might. The world of college football is changing and those who can’t see it will be left wondering what the heck happened. Does BYU really want to be part of that lack-of-vision thinking? Texas is way too comfortable with the status quo. Time to think outside the box. Maybe time to talk to some other outlying teams about creating another P5 conference with the future in mind and invite like minded teams to join.

Everyone said expansion was dead, not going to happen. People very close to the situation. And then they went into their meeting and listened to the presentation of data collected by their investigator. They stay in their meeting a very long time. And suddenly, they are looking at possibly adding 2-4 candidates.

It sounds like the data showed the conference in a heap of trouble if they didnt expand.

Holmoe today made a comment about our Olympic sports teams playing P5 teams. It sounds like he is looking at full membership, not simply football only.

Yeah Kay: I am in Tyler

BYU has about the largest basketball area in the Marriott than any place in the existing Big 12 landscape.

Good point, but would those on the inside of the P-5 and the media powers that be, accept a new conference. I doubt it