“The Cougars got a combined six rebounds and zero points out of their bigs — starter Luke Worthington and freshmen Isaac Neilson and Corbin Kaufusi — in 40 combined minutes.”

I was going to say something but then you said “no further comment necessary” so I guess I won’t.

In spite of that stat line, I’m just glad they won the game.

If BYU could develop an inside threat, it might help create a deadly inside out game that would improve the team greatly.

This late in the season I don’t know if it is possible. I can’t believe Austin is still ailing…

Well, from what Dave Rose said got pretty disturbing.
He said: " Luke is the guy that is kind of holding that thing down for us."

Then don’t play him, please! 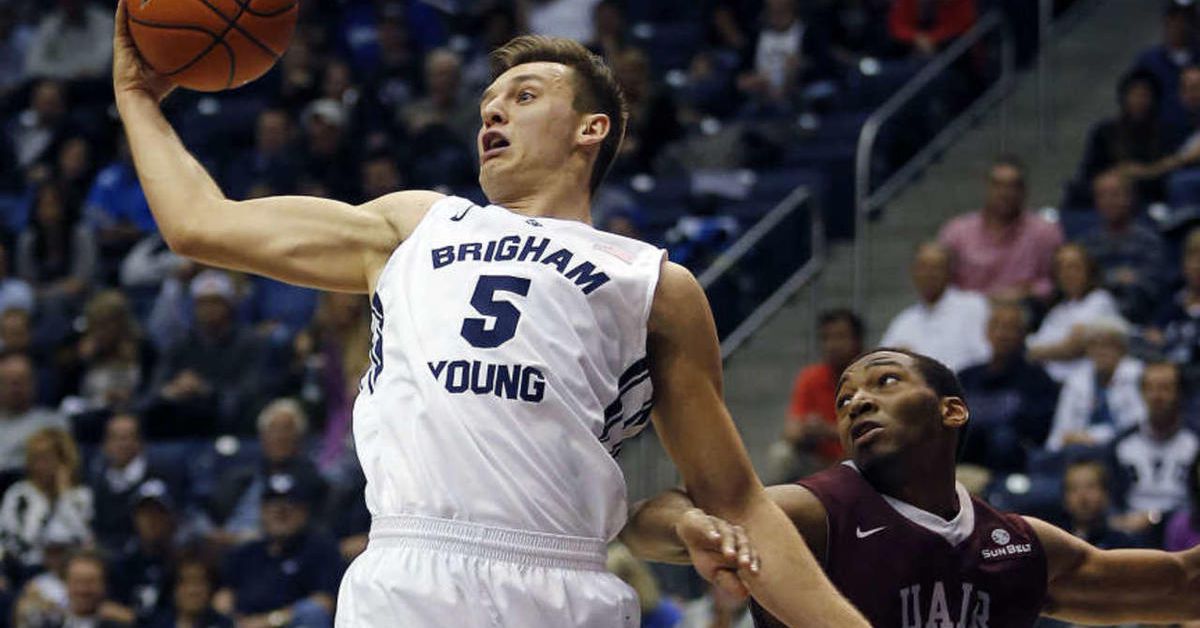 For post-challenged BYU, 'every game is a dogfight,' coach Dave Rose says

While BYU enjoyed otherworldly performances in road victories at Santa Clara and San Francisco the first weekend in January, the Cougars came back to Earth during their recently completed homestand against Pepperdine and Loyola Marymount.

The Dave Rose quote you posted is a strange comment. I interpret it differently than I think you do. I read it as Rose defending Worthington, saying he is holding the defense together. Strange quote, nonetheless.

I do agree with Dave Rose about being in a situation of a thin margin of error. Think of it. If three last-second baskets were good instead of clanks, the team would have wins against San Diego, Purdue, and Pepperdine. A fourth last second shot by Stanford would have been another loss for BYU had that been good. And Stanford now is the premiere BYU win. Think what it could have been with some…any…front court presence. Pathetic that the team now has such a thin margin of error. The St Mary’s game is now much more crucial than I ever thought it would be a week ago.

Thank you for clarrifiying this. My mistake for not reading correctly of what Dave Rose was saying. Would like to see Worthington to shoot better inside when he is put in the game.

I can’t believe what he said. Exactly what is Luke “holding down”? Many of us said, since the season began, that it was critical to get as many minutes as possible for Nielson and Kaufusi because they would need them. That was before Austin went down. If you look at the production of those two, it is better than that of Worthington… in fewer minutes played. Sorry, I just don’t see what it is Luke brings to the position or team, except for some scrappy play when the game gets in to chaos mode or BYU is desperate to make something happen. At least Halford produces in a similar type role… providing a spark.

Yes, Worthington has more experience than Kaufusi and Nielson, but he is so ineffective it makes the whole discussion pointless. I don’t understand what Rose sees in him… I just looked at his profile picture on byucougars.com and well… there isn’t much more to say.

What is difficult to understand concerning the post players is that I haven’t seen one, not one up and under move attempt all year long. Kaufusi did try to do a couple of quick short hook shots that clanked short off the back board. But, by now, something should be happening with the bigs that comes from practice to the game. Even if it’s Haws wrap-a-round fake pass move. How about just trying to dunk it on the defenders. Something…

I’m with you - exactly what does Rose mean by Worthington is holding the position down, which I believe Rose is intending as saying “without him we would be in more trouble”.

Worthington must be one heck of a practice player to merit that from the coach - or Rose is just trying real hard to keep it positive. If you did a scouting assessment of Worthington, I believe this is how it would read:

Good effort guy
Slow feet/lateral movement
Easy to get out of position or back down
No offensive skills of any kind - zero ability to shoot any shot, no inside offense, little ability to rebound on offensive end, no game with back to hoop.
Marginal rebounder with poor block out skills
Poor passer - lack of court vision
Team hesitant to pass him ball because of 50% plus turnover ration once he receives ball.

I’m not trying to be harsh on the guy, but I believe the above sums him up. I realize that he’s 6’10" and SHOULD take up some room, but he doesn’t. He is, for the most part, an invisible big guy who is of no concern at all to the opposition.

If such a player is the glue that holds your bigs together, all I can say to Rose is the obvious “BYU has a huge, huge problems in the middle” and the rightful question should be “how in the world did we get into this mess inside”. If it’s all injuries, then so be it, but BYU hasn’t exactly kept its quiver full of NBA type big guys, just the occasional one like Davies (who also struggled badly on offense his first few years) and somebody like Mika, who I do believe will anchor the middle at some point. All in all, the bigs just don’t seem to develop as well as they should - my opinion only.

your description is right on the money. Rose may be trying to build confidence or stay positive but I can’t imagine that there is much to see when watching film. Like Scott, I would like to see an up and under move or a shot from 8 feet facing the basket… anything. It just isn’t there.

The only “concern” opponents have is how quickly they can get the ball to the guy who Worthington is guarding. I’m sure Wilson (Pepp. coach) was licking his chops every time he saw Luke guarding Davis. They couldn’t get the ball inside fast enough. It was the same thing that Iowa St. player did to Austin at the end of the game last year.

By the way, I believe last years’ team was better than this years and I welcome any challenge to that belief.

Lots of talk about the loss of Austin’s interior D and rebounding, and I think that is 100% spot on. But I also think we underrate his impact on the offense. Nate is of course not a great scorer, but certainly can score on occasion and is a good finisher off of two feet in traffic down low. Nate is also a good passer out of the post, and I think this is where we miss him the most. When he is in the game we can throw the ball in the post and he will catch it without fumbling the ball, and if they let him get too deep or face up from 12 feet he can finish. Normally he will just kick it back out, but will A) not look spastic doing it and B) pass it to the right guy, as opposed to a desperation pass just to avoid a 5 second call. Either way the D has to commit bodies to that space. I think Rose has done a good job of trying to compensate by getting the guards to penetrate the paint to kick out, but it will really help out in there when Nate comes back.

Agree with your last comment simple because Mika was lightyears ahead of the current trio of Worthington, Neilsen and Kafusi (no rip on Kafusi as his situation is different from the other two and if Rose allows him to stay near the hoop, he is at least a defensive presence - although he really does need to learn to not jump at every little fake).

If the current team had Mike and Austin and could play some inside/outside, I really believe that there is a good chance they would be undefeated right now. Give Haws, Fisher and Winder a bit of room outside because of an inside game and look out, this team would have been real nasty on offense and a lot more consistent.

Not too hard to pick out the obvious. In fairness to Worthington- not sure he brings less than Neilsen, though Neilsen is a far better shooter, but this year anyway is not going to be part of the offensive scheme and is probably worse defensively than Worthington. Eh maybe-it’s a tough call lol. My question is that BYU used to recruit foreign players pretty well but I haven’t seen much of that it some years-sometimes I think the foreign players come more ready to compete than the kids out of high school-another topic for debate. Tom-thanks for the heads up on Aytes-I have a few whisperings he may be back, but I believe would probably would be a waste of a year for him at this point. Ducks got mauled-not a great night:(

Good points grasshopper. Are we into “coach concern” again, like in football? Has Rose met his peak in coaching? Ever hear of the Peter principal?

a week ago I would have argued with you on that point but after that pathetic loss, I have to agree that we are worse then last year.

When I first read your last statement my inclination was to respond, “no way”. But after thinking about it, I agree. This year’s team struggles to finish a game. Even in the two blowout wins they lost focus for a time and gave SC and SF a little hope. They don’t have the killer instinct in finishing games.

don’t get me wrong, it doesn’t mean they can’t improve and I am really hoping that when Austin gets back that will happen. His injury is turning out to be way more serious than it seemed. It has been over a month hasn’t it?

There are a few things that make me believe the team isn’t as good as last year and I have mentioned many of those things from the beginning of the season. Let’s hope the improvement that can take place does over the next 6 weeks or so…

I think it can.

They are certainly good when they work together and are “firing on all cylinders”. Current lack of post presence is the killer. Saturday’s game will tell all.

Jim: I am not so sure that Austin’s return will make that big of a difference. I hope that it does. But we shall see. I agree that BYU is using their last best resort with the four guard lineup. But I am not sure if Rose is capable of getting his boys to change up schemes or to keep a killer instinct throughout a game. I am not sure of these assumptions, only time will tell. I also believe that after several years in the rec-league WCC has taken its toll on BYU recruiting and that our competition is something less than the MWC except for in reality Gonzaga and St. Mary’s.

ESPN top 100 recruits since joining the Rec League (just off the top of my head): TJ, Nick Emery, Mika, and Dastrup. That is likely our biggest top 100 haul EVER in so short a time span. Toolson also highly recruited. And Jamal Aytes is a HUGE get for us. I’m not sure how the WCC has taken its toll on recruiting.

Since this is a post on our bigs. I am somewhat disappointed in the lack of progression of Corbin K. Last night he jumped at everything getting 4 cheap fouls and playing very few ineffective minutes.

How about the play of Andrus? He was by far our most effective big last night.