Given the projected roster situation at BYU, Emery needs to be considered a serious candidate to lead the nation in scoring as a sophomore—provided he doesn’t get suspended for punching opponents again. He should be the primary ball-handler and he should have a permanent green light to shoot. 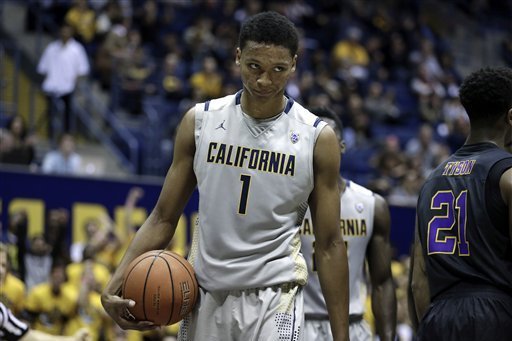 After passing on the chance to become a lottery pick in this year's NBA draft, California's Ivan Rabb headlines our robust list of college basketball's top sophomores for the 2016-17 season...

Doesn’t sound like they know much about our team. We will still be deep when it comes to players at all positions. I think Mika will get a few touches too.

Yes, they will finish second or third to Gonzaga and St. Mary’s again and we will hear the cries once more… “wait till next year!”.

Can’t wait to see how the wcc works it to get Gonzaga to a 22 straight year in the ncaa tournament.

Right on Jim H. The WCC/Gonzaga/St. Marys Conference, that is the "WCGUSt.M Conference.Or better know at the “fix it” rec league.

LOL! Thou shalt not bear false witness upon referees.

If somebody had asked you 5 years ago whether BYU would win a wcc title at least once in the past 5 years, you would have said, “absolutely, no doubt in my mind”.

Even in a year that Gonzaga was very vulnerable and weak, it didn’t happen. When one team is allowed to play their game and isn’t called for the same fouls as their opponent is, it prevents that opponent from being able to do what might be necessary to win that game. When one team is allowed to shoot significantly more free throws and none of their key players get into foul trouble because they aren’t called for cheap fouls like the other team (ie. the Lebron factor) is, it inhibits that team from being able to play their best.

It’s too bad that the wcc loves Gonzaga the way they do, but they have brought in so much revenue to the conference over the years that they kind of deserve the golden goose treatment. I hold out hope that one of these years the league and the officials will be able to look past that fact and call a meaningful game in such a way that allows each team to compete and gives each team a fair shot at winning the game.

That is my hope.

When you say one team is allowed to play and another team isn’t allowed to play, that would be an intentional act. Especially if you include years of this happening. Yet, you even said you didn’t know if it’s intentional. Thus, no proof of whether GU is allowed or not. Observation then is no proof of anything. I don’t know why you try to force your observation as fact?

It involves a pattern of action that has entrenched itself over the years. The results point that direction… and can be proven through observation first (hypothesis) and then studying the box score (facts) afterwards. In reality it is scientific in nature. The hypothesis is that in meaningful games, ie. games where a ncaa tournament berth or wcc conference title hangs in the balance, Gonzaga somehow is able to win those games every time. Not just 70% or 80% of the time like you might expect from a quality program, but 100% of the time. The fact that they are a quality program makes it more difficult to perceive. On the other hand, the fact that it has happened for 20+ straight years is no coincidence. Like i have stated, there are numerous reasons for why the wcc favors the Zags, the most important of those is money. That is the bottom line in the world we live in… and that is a fact.

Yet, you even said you didn’t know if it’s intentional.

A drug addict never intentionally tries to kill himself. It is the addiction that kills him. So what is the difference between something that is intentional and something that a person can’t control. The officials and the conference really can’t help themselves… it’s as if they don’t have control over how they make calls in an important Gonzaga game. They are compelled by so many outside factors, just like a drug addict.

We’ll see what happens this coming season. I say it will be business as usual. Gonzaga will win the wcc games they need to in order to keep the streak alive, with ncaa berths and if necessary, wcc titles.

So, the league has been threatening officials to fix games for GU for 20 years and no one has said a thing? Impossible…

Of course not. But this is how you need to portray it in order to make your point and do what you always try to do… prove somebody else wrong. That need that you feel is really kind of strange. I’m not sure why it is so important to you to prove someone else wrong by over reacting to what is being said. I have explained myself ad nauseum, everyone knows that. But your portrayal of what I am saying is inaccurate. It always has been. Unfortunately that is what you feel the need to do in order to prove me wrong… to take it to the unbelievable extreme.

I’m not trying to prove you wrong.

No… that is exactly what you are trying to do.

Korihor - “why can’t you simply provide the evidence?”

I can’t provide the evidence you seem to require, but that doesn’t mean it isn’t true. I will say this, for the zillionth time.

I believe, like RBlack does, that there is bias and that the evidence for such abounds. I believe that there is just enough bias in favor of Gonzaga, in the wcc, that it absolutely helps them to a win on occasion, specifically in a game that has some meaning. I believe that MOST of their success is a result of their talent and their coaching. I DON’T believe that this is the case all of the time, just most of it. I don’t believe the league specifically tells the officials to influence outcomes. I do believe that outcomes have been influenced by officials, on Gonzaga’s behalf, in the wcc in meaningful games. I believe that the league is totally fine with that because Gonzaga is their golden goose. When it matters, the game is called to their advantage. I don’t know why, I just know it is.

One important thing that I don’t just believe, but actually know for a fact, is that you have portrayed my beliefs in such a way as to make them unbelievable. That is how you try to prove me wrong. In your mind it works, but in the minds of those who understand where I am coming from, your methods are nonsense. They know and understand what I am saying and, like I said before, that is good enough for me. I don’t need you to understand or agree but if you feel the need to continue misportraying my opinions, feel free.

Apples and oranges. Korihor was looking for physical evidence of spiritual thing. I’m asking for physical evidence of a physical thing.
What you are saying is referees have developed and inert bias that somehow enters into all referees. Highly unlikely but is better than saying the league creates this bias and forces referees to help GU win. That would require some form of communication written or oral and there would be a snitch somewhere after all these years.

Nope, not what I am saying but keep going after your warped interpretations if it makes you feel better. ALL referees? ummm… okay.

It isn’t apples and oranges, but that is a rhetorical statement that can work with anything.

You couldn’t finish your comments without going back to your safety zone… the oral and written communications along with the “snitch” insinuation. Classic…

As far as Korihor goes, the existence of God and Jesus Christ is VERY physical in addition to spiritual and you really aren’t sure what you are asking for, you just want to prove someone wrong.