BYU, the NIT and random thoughts

1stly, BYU does not deserve to go to the NIT. With all the bubble busters out there kicking deserving teams out of the big dance, hopefully, there is not enough room for BYU and we save face and decline a CBI invitation.

2, Rose does not deserve a 20 win season. What he should be doing is announcing his retirement and give someone else the ship. You can’t pin this on the players, no way. 4 star recruits, who can’t get off the bench, who transfer because of favoritism.

3, I have spent a fair amount of time watching USU. They are so well coached and just fun to watch. USU better watch out because this coach, Craig Smith, was the So Dakota coach for 2 years and took them out of the dumps to the CBI and then the NIT. here is his contract including pay. 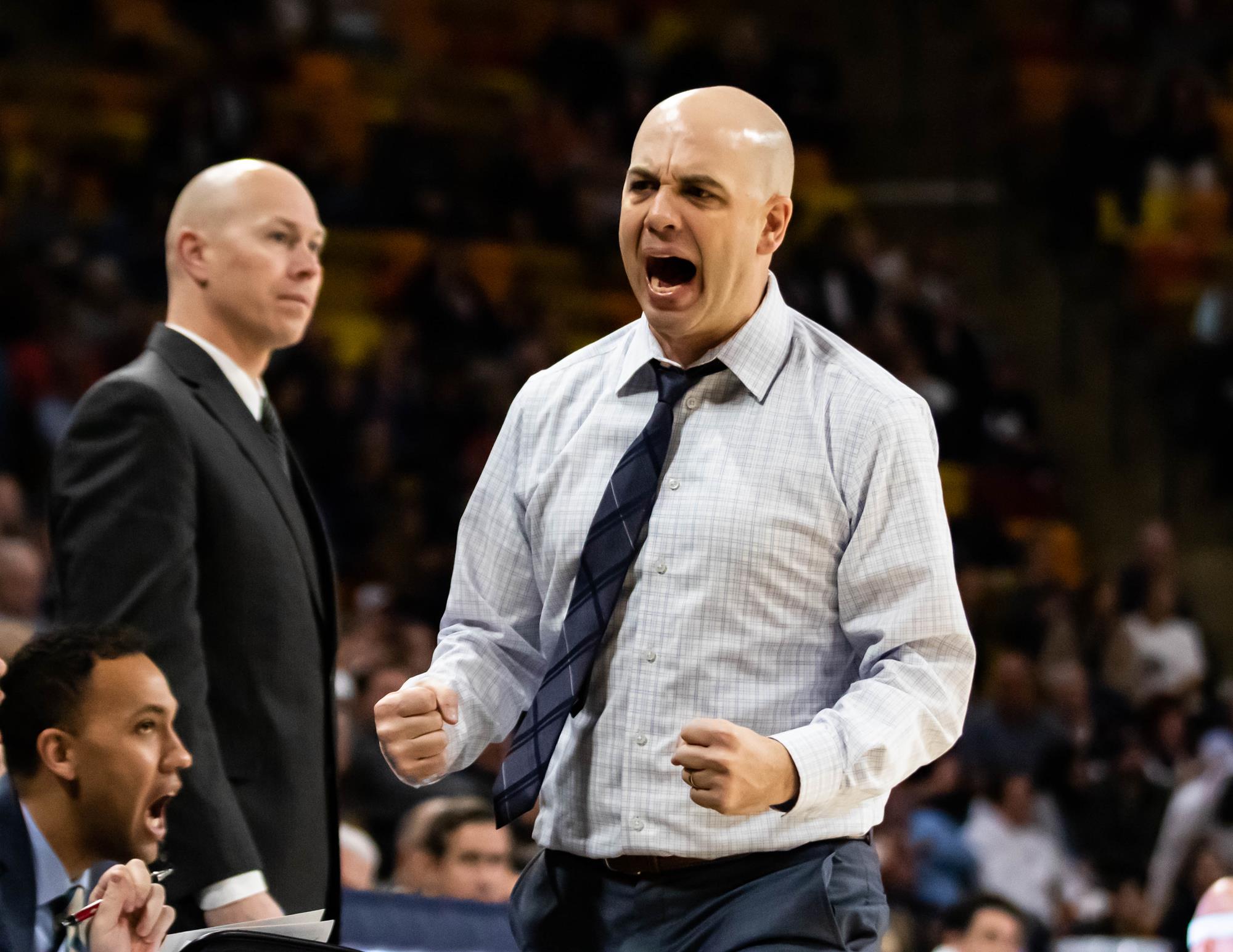 As the Mountain West regular season comes to a close tomorrow night, with a few teams still jockeying for position in the conference tournament, I think it's safe to say that coach Craig Smith has exceeded all expectations. Utah State Head Coach...

4, I highly doubt that BYU pays upwards of 750,000 per year to Rose but I may be way off. But I would say that USU had better watch out because Smith is now the hottest coach out there and with a middle tier Utah (Krytowhack) getting 2 million a year, let’s just say Smith is in the hot seat now.

5, guys arguing whether Childs will bolt or stay? Pleeeeeeese, Childs would get much better coaching in Europe and he would get paid. And he would get big men teaching, something that ROse has never bothered doing in all the years I have been a fan.

6, Jimmer in the NBA, Pleeeeeese, he can’t guard a NBA point guard. The entire NBA works on high picks to expose a guard to a forward or center. Imagine Jimmer trying to guard a switch with George (OKC) or any other forward in the NBA. Jimmer needs to stay and be a legend in China

As soon as you said blah, blah, blah does NOT deserve blah, blah, blah…I stopped reading. BYU deserves whatever they receive. If they get in they deserve too. If Rose gets paid $$$ he deserves it…

As soon as you said what you did I was very interested to read on and see what else you were going to say. The truth is there will be teams that don’t make it in even though they deserve it and teams that make it in and didn’t. It’s just the way it happens because people are very imperfect and can’t be honest and equitable in their decisions. The main problem is that the love of money gets in the way, like it seems to in most peoples’ lives.

I am glad you posted your random thoughts and yes, Utah State is a fun team to watch. They play with intensity, effort and desire. They have a very good coach who motivates them and knows how to use his players without playing favorites. Incredibly he has like 7 returned missionaries on his team and recruits from everywhere. They have several players from outside of Udaho and several from outside the country. In fact, only 3 of their players are from Utah and none from Idaho.

They have progressed from beginning to end of season too. BYU beat them early in the season but Utah St. is a much better team right now, when it matters. I will be rooting for them in the ncaa tourney.

If Rose gets paid $$$ he deserves it…

Blah, blah and blah…teams are in because they are the best teams to be in the NIT. Everything else is your subjective.

I am glad you posted your random thoughts and yes, Utah State is a fun team to watch. They play with intensity, effort and desire. They have a very good coach who motivates them and knows how to use his players without playing favorites. Incredibly he has like 7 returned missionaries on his team and recruits from everywhere. They have several players from outside of Udaho and several from outside the country. In fact, only 3 of their players are from Utah and none from Idaho.

But the real reason why I posted on USU is because they start 4 white kids who should not be able to stay with the speed of other teams…and yet they not only do but do it well.

I believe in what’s best for the future and rewarding Rose for mediocrity only breeds more of it. Playing in the CBI, where you have to foot your bills to the tune of 50,000 just to play a prairie high team…and you have to play your travel costs, sounds about what Rose deserves this year. If BYU were serious about next year, can Luke as a grad coach and Hire and Pay a coach from USU and COPY everything they are doing, down to their conditioning

But the real reason why I posted on USU is because they start 4 white kids who should not be able to stay with the speed of other teams…and yet they not only do but do it well.

Interesting… but they have no talent because those players are white and people only use the word talent to describe black players without sounding racist… right grasshopper? I have no interest in the color of a players skin. I just want players who know the game and can find a way to be part of a team and improve their skills over the course of a season.

That is something our current staff hasn’t been able to do for the past several years… if ever.

If BYU were serious about next year, can Luke as a grad coach

Who is going to help coach the players next season on how to commit flagrant fouls and shoot brick jump hooks?

Congrats to USU and SMC. They improved all year long and both picked up improbable tournament championships. It’s a credit to their coaching staffs and players. Now about BYU…well never mind!

That being said, it appears that the selection committees are throwing the state of Utah under the bus as Utah St. got a very poor seed at #8 in their bracket. If they win they will have to play #1 North Carolina.

Pretty bad effort on the part of the selection committee for a team that has been very good at the end of the season and in their tournament. It’s a shame but that is to be expected.

Those who can’t, teach

Luke should walk away from the sport of basketball.

Why? He might be a great coach. I never heard of Mark Pope until he started coaching. Or Mark Few. How many great players become great coaches or even coaches? Very few. So maybe Luke will be a great coach…

I never heard of Mark Pope until he started coaching.

He played basketball at Kentucky on a national championship team. He also played in the nba. Does that help?

Ohio State was 3-7 in their last 10 games and lost to several teams who didn’t make the ncaa tourney during that stretch. Seriously, they have no business being in the ncaa tournament.

But big money talks so there they are.

The experts were saying that the Pac 12 was a one bid conference only a few weeks ago. Seriously, they are not a very good conference. I saw Washington play the other night and they looked terrible. They were the regular season champs. Oregon wins the pac 12 tourney and they both get in as does Arizona State. Oregon has Nike support… big money and they are in. UW looked like they had no interest in winning that game.

It’s the same old sham we see every year.

Ya, but he hardly played.

Hopper, sometimes you need to know when to not say anything because when you open your mouth … it removes all doubt! Pope played lots at Kentucky and was a key part of the National Championship team. When you make a stmt that “yea, but he didn’t play very much” you just add more belief to those on this board who umderstand that you know very little about sports and just try to play devils advocate on all points.

If Pope didn’t play much he wouldn’t have been drafted and remained in the NBA for awhile. Seriously, pick another issue to argue about. Pope and Worthington have about as much in common as post players as Nick Emery and Danny Ainge do as guards!

Right on Jim H. I watched two hours of the NCAAW “selection” show on ESPN and ESPNU, somewhere I lost their so-called third hour. What I saw in two hours they never mentioned the BYU Women’s team nor did they show them “learning” when and where and who they would play. But guess what, the lead story on Cougarfan.com News told me that they were playing Auburn at Standford.All I learned on ESPN was that BYU was playing as No. 7 in the Chicago Region against Auburn on the underscreen of my TV. I thought maybe it was at Notre Dame, since they are No. 1 in the `hicago Region, which means that ND will play their first two games at home…I guess. That’s what happens in the NCAAW tourney, No. 1’s get two games at home. $$$$$$

The experts were saying that the Pac 12 was a one bid conference only a few weeks ago.

And the Pac12 Conference is a “Conference of Championshiop?” They need to change their slogan - “Sinking Ship.” What is better slogan for them?

I agree Jim about Ohio State and the selection comities. The west are all on a downhill trend or forgotten.

Ok, thanks Hawks for saving me having to point out Pope’s resume. Many at the highest levels at BYU would love to have Pope running things, but as long as Holmoe provides cover for Rose, Rose is not going anywhere. Players LOVE Pope, and he is a fantastic recruiter and teacher of big men. Rose (to me) seems like an angry old man now. Kids don’t respond to that. Kids want to go all out for guys like Smith and Pope.

Few is an old man…So are many of the coaches for the big and powerful schools.
The idea that you are age bigoted is really pathetic. How do you know what the players feel about Rose?