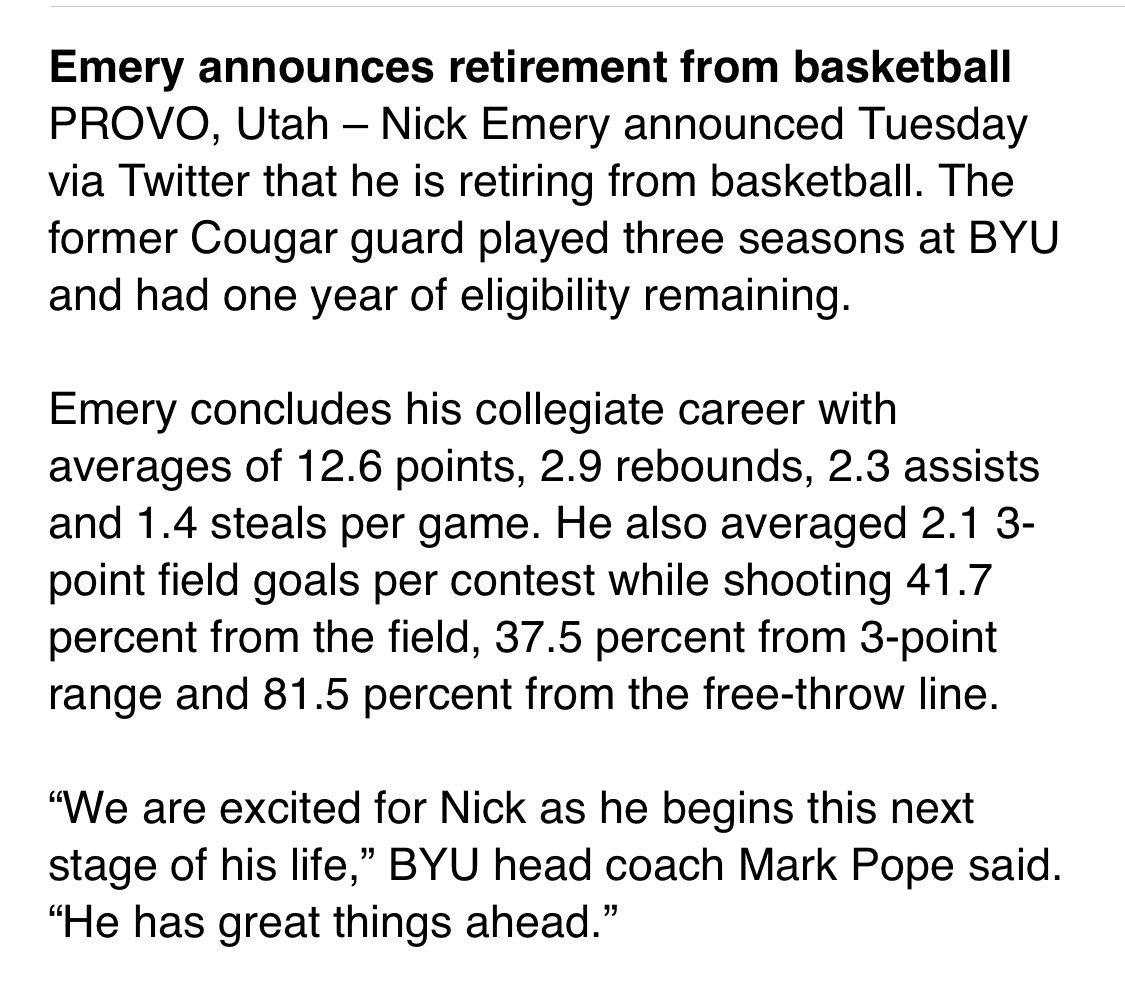 wow, where to start???
I was dismayed that Emery was invited back to BYU after everything that has happened. And when he did come back, he was not the player he used to be. I had hoped for his sake that he got his swagger and love for life back on and off the court and I hope he can move on and have a great life.

We can all speculate on why now? Look to Pope 1st and Haws, his HS friend and confidaunt 2ndly. It may be that Haws and Emery had a falling out. I will say this, Haws is driven and wants a certain legacy at BYU, as does Childs, Emery, from my personal observations of past practices, goof off.

Others must be really stepping up and Emery doesn’t want to compete so hard. To me, this hurts BYU because he is a senior and it would have been a year with a lot of experience.

Emery would have lost his playing time this season and others on the team are more serious about bb than he is. Time to move on. Toolson and our new GU guy would have eaten Emery’s lunch and they will show it this coming season.

I agree his concentration is more on his marriage after the last one fell apart. But, I don’t think Toolen would heat his lunch. I do think Emery probably would come off the bench which is what I was hoping for. A deep bench.

It was time for Nick to move on. Wish him well and his new family.
BYU current players should do fine with out him and just move on. 37 more days to go for BYU football.

Time to move on? What does that even mean? No, there is more to this. And, I’ll say it again, with his talent, and being a senior, it’s a definite loss. Wade won’t step in and take his place. He will do good but that experience is something we haven’t had for a long time. That’s a loss.

I am not sure the reasons why he decided to quit basketball, I know it was NOT because he does not want to compete as Scott mentioned.

I know watching my son go through a horrible nasty and bitter divorce, that it took him several years to ever date again. It crushed his self image and even though he was not the primary reason for the breakup, he still felt like he failed. Add to that he had a son his ex-wife to this day still tries to use against him. Tough time for my son. Now he is remarried to someone who appreciates who he is and very supportive of him in dealing with the ex.

I played competitive sports until I was almost 36 years old, then one day, I simply woke up and decided I did not need the angst that went with playing competitive sports, I had a family that needed me and I needed to focus on them.

So maybe Emery just needs to kick back and move on, as the article mentioned that he was never going to be NBA bound, I think Emery came to the realization that sports is just not that important in the realm of things.

Thank you for stating this was your opinion and I accept it as such. I agree what your opinion is on why he quit. I remember Danny Ainge quitting coaching basketball because of family issues. I hope his decision will work out for him.

As for the reason you quit sports, you were 36 and the old body stopped you

it’s okay to admit. You went into umpiring and proved it was your vision on why you quit

Actually Scott, I could have played another 3-5 years. I was in the best shape of my life.

I just could not be around people who lose control of their emotions over a game. It dragged me down and my wife was not happy… so I decided enough was enough and never looked back.

Meh, lousy argument. Dragging the wife into your reason. Sad. When you lose your edge you start looking at others lower qualities and mistakes. And, how many 36 year olds say they are in the best shape of their lives just before their stats go down and then retire.

Call it what you want. I really don’t care.
First of all, I was in the best shape of my life because I was working construction. I could carry a 250 lb electrical panel up five flights of stairs. I would do most of the grunt work because I was working my way through college.
Second, I played on three sports teams at the same time. When I quit, they all came to beg me to come back.

Thirdly, you don’t know what you are talking about when it comes to me because you don’t know me. I came to the realization that my competitive spirit was hurting my family and the Lord made it pretty clear that I needed to change. So I did.

So believe me or not I don’t care, because I know the truth and you simply like to he negative.

It was time for Nick to move on. Wish him well and his new family.

apparently Nick is not moving on very well. 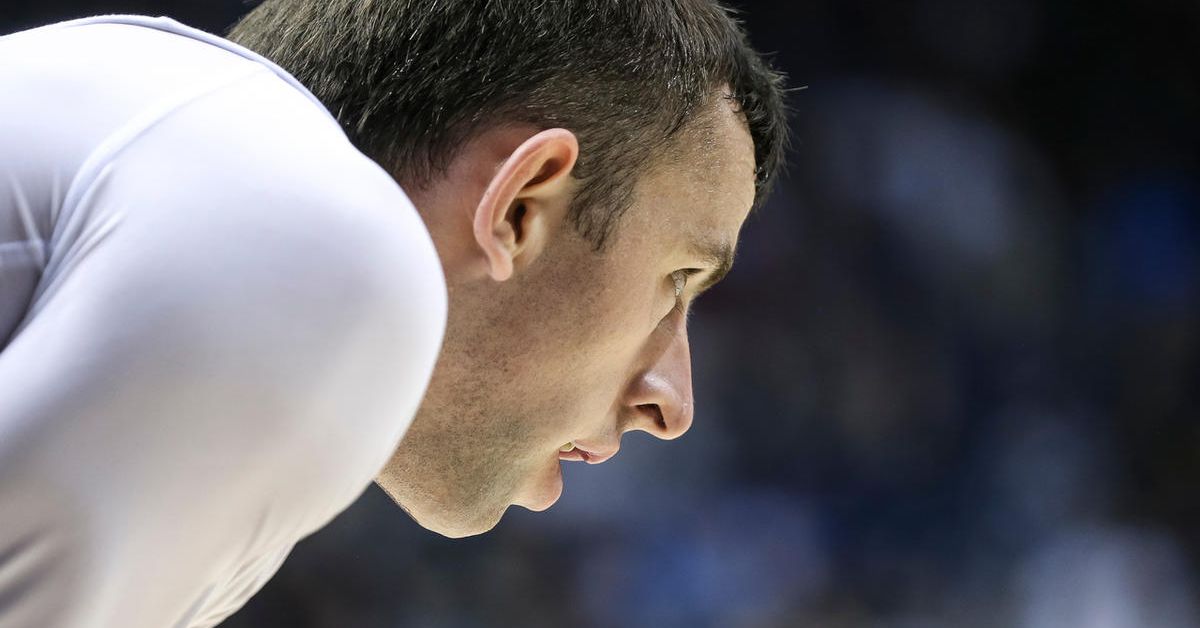 He needs to behave himself. He sure act like a kid and he needs to grow up

You have two distinct players with mental challenges, Mangum and Emery and how each has handled it so differently.

Hopper now has another explanation to offer the crowd on his assertion that Toolson wouldn’t eat Emery’s lunch. I stand by my statements. Toolson was a way better player, teammate, ft shooter, scorer, assist guy, rebounder etc … and he didn’t bring a cancer to the team. Emery was allowed to run all over the program and brought himself, Rose, and the school bad PR. Pope sent him packing in the summer and it couldn’t have been a better decision. This is a perfect example of Hopper’s lack of ability in talent and performance evaluation … over the past 10 years.

So, you are now going to judge Emery’s ability for his senior season when he didn’t play against someone who did play. As I wrote, Magnum handles his mental challenges better than Emery. Now, I hope you sincerely can handle yours better too.

Yes I am going to judge Emery’s contributions for his full career against the contributions of Toolson. Toolson had a great year and career. He should have been allowed to play more at BYU when he was there but the Lone Peak 3 dominated all common sense thinking and recruiting. Yep, Toolson is a better player than Emery and a better teammate and leader. This years team should have been the worst BYU team in the last 4 years. Pope arrived, brought Toolson with him and talked Childs into coming back and improving with good coaching. Everything turned out in a way that the expected worst team morphed into the best team BYU had in 9 years. No credit goes to Emery … he is the one who could t handle the new role he was going to have on the team … and he quit and then bad mouthed the coaching staff after he left. Couldn’t be happier for this team that Emery left.