Jeff Call of the Deseret News has been doing a series about starting True Freshman as QB at BYU. He has talked about John Beck, Drew Miller and Jake Heaps in the past. Now this one is for Ben Olson.

He does not sound bitter, but he does not make any bones that Crowton had promised him to start at QB at USU game (Backed up by B. Kiehl) and then Crowton changed his mind. That was probably the start of Olson leaving BYU. 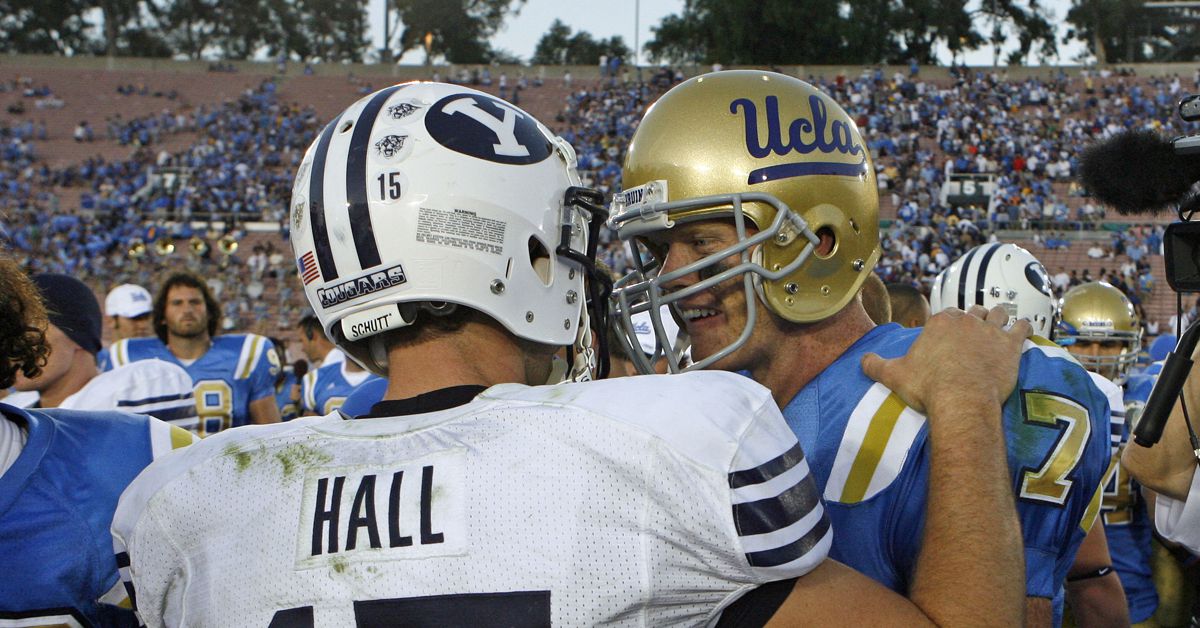 Ben Olson, the five-star prospect with a 6-foot-4, 210-pound frame and a gun for an arm, was once-regarded as the best prep QB in the country and the overall top prospect in the nation.

Well now isn’t this a shocker of an article…

BYU screwing up and playing head games with top level recruits and talent. If anyone wants to know the biggest reason BYU doesn’t get top level recruits, this article pretty much sums it up. It has very little to do with honor codes or some of the other silly reasons people post here,

It is all about politics, favoritism and jealousy.

This is the biggest reason why BYU will NEVER have a top level program in the sports that matter. What a shame.

I think Crowton believed his own press clippings, but I also believe that Mendenhall, while a great coach, did not treat the “Star” Athletes very well. He could have convinced Olsen to stay, but I not sure Mendenhall wanted him.

Gary Crowton has this very think offense play book that may have scared Ben Olson. That Utah State game, I thought Ben was going to play, and it really was frustrating not seeing him how he would do in that game.

You think Bronco Mendenhall would welcome him back of this “5 Star” QB after his Mission? I don’t know.

Not old dirt Scotty, but with all the negative comments you made about Ben Olson when he transferred (Not willing to live the HC and crap like that), maybe there was something you did not know about, like Crowton lying to a kid about starting.

So, kids never get the wrong idea? People often hear what they want to hear. And when they don’t they fall into a case of psychosis. Democrats do it all the time. First Reagan, then the two Bush’s and now Trump Derangement Syndrome. So, why wouldn’t Olsen have maybe misunderstood the coaches?

Of course you missed the part in the story where Bryan Kiehl backed up Olson claim about being told he was starting the USU game.

You also forget Crowton was not above board as a coach and basically caused THE single biggest black eye on BYU football in this history of the team where several players were charged in a rape case.

He did not have proper control on the players, so we got Bishop Mendenhall as a coach because of it.

And did Bishop Mendenhall restore order and the good name of BYU? Yep and he won many games but not enough for some. And they ran him out of town. So last year we went 4-9 and had our best runningback return missionary smoking joints. Well, we will see what happens this year. But, as for Olsen, he just didn’t want to work hard enough.

Jim, I have to agree with you on this one.
We have never treated our 4-5 star players with the respect that they could get from most any P5 team from any of the P5 conferences. Bronco was the biggest offender of this.

Bishop Mendenhall made BYU “Name” as an institution better, but he has made the football program a joke with all the slogans, quoting scriptures at press conferences, etc.

Add to that he under developed ALL his star QB athletes, starting with Ben Olson. Do you really think Reilly "Noodle arm: Nelson was better than Jake Heaps and/or Jason Munns?

Nelson was NOT Doman (who was the OC at the time) pick, it was Heaps/Munns. But Bronco loved “Nelson grit” and overrode Doman decision. Then when the season went in the tank, Doman was blamed.

Doman does not have any sour apples about BYU, he still supports the school and the team. Gives great opinions on what is going on in the field during games. Doman being elevated to OC was due to Bronco not knowing how to pick his coordinators.

To say Bronco was run out of town is hilarious, Bronco was not a good recruiter nor a good judge of coaching staff. He saw the writing on the wall of the mess he made, and bailed to cover his back side. Last year debacle is in large part due to Bronco recruiting players who were not very good, especially on the Offensive line.

Most of the problems last year were injury related in key positions. QB to start with and runningbacks, tightend injuries was next. No, we will see a better year this year.

Ya Floyd, I just hated all those 10 win seasons. I was hoping for many more 4-9 seasons. Bronco was successful. He will be again where he is. He recruited Heaps a 5 Star. Couldn’t have been that bad of a recruiter.

Most games was done because our OC and other Offensive coaches had no clue in hell what they were doing and getting out coached every game.

Mangum? he looked worse under Detmer scheme when he played.
They had no good wide receivers, did not utilize the good TE’s they had.
The running back, while they had injuries, others stepped up and played well.

Now go take a look at those ten win seasons… how many of those wins were against quality opponents? Very, very very few.

It is easy to get 10 wins when you are playing the cupcakes of the college football scene.

Runningbacks stepped up? None of the backups could remotely compare to Williams. And the QBs going down to the 6th level? Come on. Yes, the TE weren’t being used properly. But that wasn’t as important as the injury problems. We aren’t deep enough to have massive injuries to key players in key positions.

First of all, Williams was not on the team last year, he was with Green Bay…
second, KJ Hall, Sqaully Canada, Ula Tolutau, Burt, Dye, El-Bakri all stepped up last year, when one RB went down, the next one stepped up.

Six levels of QB’s? what are you smoking dude…
Starter Mangun - went down
The came in Hoge - went down
Then came in Critchlow… Did not get injuried, although the way he played in the last game may have made you wondered.

Kou Detmer did not play much last year, although he was healthy the whole season
Austin Kafentzis played Wild Cat QB on some plays, while being a RB other plays as well as a receiver.
Wilstead - Was Redshirted and never played, he is now transferred.

So no we did not have our 6th string QB starting.

We didn’t have our #1 QB either. As far as RB’s what do you mean they stepped up? None of them are at the caliber of a Williams.