One of our guidance counselors’ sons is redshirting this year at BYU. He’s on the scout team as a defensive back, and was specifically told they want him to play for four years; hence the redshirt request this season. According to this mother, coaches have been hounding him and are constantly haranguing him about press coverage. According to her, he was relegated to the scout team because he refused to play the Tuiaki “concede 4 yards per run, and 6 yards per pass” coverage. He still presses the receivers and tries to shut them down. He wants to play tight coverage and not concede the underneath stuff, but is being told that he needs to trust the system and the philosophy.

Granted that this is one perspective, and a parent’s at that, it meshes with what we all see. If this is true, then the coaching staff don’t see any need to change anything on defense. They feel we just need to trust the system and philosophy, and follow instructions.

His brother is a 6’7" defensive end at ALA-Queen Creek, and they are rethinking BYU because of concerns about the defensive coaches.

I’ll take the parent’s comments with a healthy grain of skepticism. That said…

These last two weeks have been pretty disastrous for BYU football. BYU was ranked #10 and all the rage, then IMMEDIATELY proved that the voters were badly duped and BYU football is pretty average. My guess is the ALA -QC DE is not the only kid paying attention. There are only 2 explanations for Tuiaki: 1) he genuinely doesn’t think pressuring the offense and attacking the LOS matters, or 2) he thinks our back 5 are so bad that they will get burned all game if challenged.

If we see no changes in scheme after two BRUTAL losses, I’ll know all I need to know about Sitake.

Rubicon: “If this is true, then the coaching staff don’t see any need to change anything on defense.”

Me: This is NOT a slam response, at all. My comment is how long has this defensive “philosophy” been in control at BYU. I don’t remember how far back. But 3 or 4 years (or more). So, seems to me the entire defensive coaching staff AND Sitaki do NOT see a need for change. If I was a talented DB high schooler and believed in myself as a tight coverage DB, I would not seriously consider BYU as a university to play for.

I’ll take the parent’s comments with a healthy grain of skepticism.

Absolutely. A large grain of salt. But, like you said, everybody can see the lack of pressure and the concessions of yardage and time of possession. It isn’t because of talent; it’s an intentional approach and philosophy.

According to the player (via his mother), that philosophy is to concede catches and yards in order to give up the big play at all costs. The idea is that the offense will eventually (hopefully) make a mistake. As many have observed, our lack of drives and time of possession because of this has been catastrophic, and we end up being carved up by quarterbacks who can eat a sandwich in the pocket and just pitch and catch with people up the middle all day and move the chains.

Sitake’s job is secure, and unfortunately, so is Tuiaki’s. No matter how we do.

The worst part of all this is to watch a team like Air Force control Boise when BYU could not. I am weary of watching the philosophy unfold each and every week. It seemed to work ok at the beginning of the season and now it is a total failure because it was exposed by an average Boise St.

It didn’t start out as a gripe session. I asked her how her son was doing, is he cracking the depth chart yet, etc. She said they are redshirting him because they want four solid years if eligibility, but they keep getting after him about close coverage on the scout team. She said that was the main reason he was demoted — he continued to refuse to concede to the offense after repeated censures.

A selling point for Detmer and Hall is D1 placement (Arizona is open enrollment). I wonder if eventually they will send fewer BYU’s way.

Last thing I would trust is a Mom’s opinion of Football when it comes to their own son. Now I do know many good if not great football moms but…when it’s her own son, I call eye roll. but then:

Sigmund Freud taught that the truth is never far from fiction.

It has to be injuries, has to be. We didn’t start out the year this way. Tom is right about several points. BYU is borrrrrrrrring on defense and we will have kids that would of come to byu look elsewhere.

I agree Fish. I would like an independent voice to tell us if the coaching staff is really getting on the practice squad DB’s for playing press coverage. I am not saying I would discount what a parent says but I would not give it much credence unless verified by an impartial observer.

Last thing I would trust is a Mom’s opinion of Football when it comes to their own son. Now I do know many good if not great football moms but…when it’s her own son, I call eye roll.

I agree Fish. I would like an independent voice to tell us if the coaching staff is really getting on the practice squad DB’s for playing press coverage. I am not saying I would discount what a parent says but I would not give it much credence unless verified by an impartial observer.

I agree in general about sports parents, perspective, bias, etc. But, we all know that we are purposely not pressing receivers and conceding run and passing yardage. Coaches have talked about that. So that detail matches the reality we all can see.

It was her detail that her son has been told “trust the system and the philosophy. Stop trying to press and shut down your man” that stood out to me. Sports parents have complained about playing time, coaches not seeing the real value in their kid, etc. since the beginning of time. That detail made an impression on me.

The player is a 6’2" freshman with blazing speed, and his brother is a 6’7" defensive end on a team with an excellent chance to win the state championship. They are going through buyer’s remorse now with BYU.

The player is a 6’2" freshman with blazing speed, and his brother is a 6’7" defensive end on a team with an excellent chance to win the state championship. They are going through buyer’s remorse now with BYU.

Stay tuned, I have the same frustration with my BF’s son, recruited, served a mish, grayshirted, 6’6, 260 lb and now the most powerful guy on the team, pound for pound, recruited as a D end, was ahead of Batty in HS, dominated him, now as of two weeks…they are asking him to bulk up to 280 and be a D tackle rather then D end. Frustrated but “trusting the system”.

“I know we recruited you for three years as a sack-master and game changer, but really, I hope you don’t mind moving up into the next weight class and getting double teamed by two interior linemen on every pass play. It will be really fun!”

The two Daley kids were some of the best edge pass rushers I’ve seen–I think one is on a mission and one committed? May be off on my timeline…do we lose one? Both? Who knows. I’m not being cynical here–it’s a legitimate, honest question to ask whether our style of play will be a deterrent to high-impact defensive players.

It’s mind boggling, We have no sacks, recruit edge rushers and then don’t use "em? Trust the system.
In truth, he was doubled all through HS and he still wreaked the other teams and got to the QB, so who knows.

The film on both Daleys is downright scary…on the JHD Hudl, just watch at least the first minute–at 0:31, the spin move to beat a double team is INSANE, and at 1:00 the 230 pound DE catches a 98 yard TD pass, outrunning the entire secondary–by a lot.

Michael Daley (the older one):

JHD (the younger one): 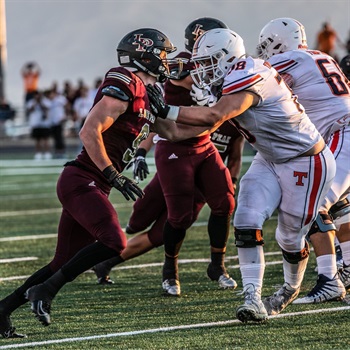 We will never win the B12 or get to a New Years 6 bowl without a great pass rush. Tui is simply the luckiest guy in the football world to get a DC job and have his cousin be the head coach and his protector. I can guarantee you that he will not be lured away to be a head coach or be a highly paid DC at another P5 school. Bronco is waiting to cash in on Saturday. Sitake better help game plan or we will be in trouble.

With that said, I think we will have to score touchdowns on every possession. Sometimes a team just has to score more when they can’t rely on their defense.

The film on both Daleys is downright scary…

Ok, maybe you don’t understand Tom. They are too fast and aggressive! attacking the QB, etc. and that doesn’t work in the BYU “system”. The game plan is to play patty cake with the opposing offensive lineman and hope the QB makes a mistake… at least that is what I have seen in the first 8 games. How BYU is 6-2 at this point is mind boggling. They have been very fortunate. If they insist on using the “system” as BYU moves toward the Big 12, it will fail miserably. The system needs major tweaking in order to keep pace and get the recruits they need to compete at a higher level consistently.

With that said, I think we will have to score touchdowns on every possession. Sometimes a team just has to score more when they can’t rely on their defense.

Do you really think we are capable of doing that, from what you have seen? We haven’t done that even against very bad teams. We can expect to score in the low 20s, for the most part, no matter whom we’re playing against. Which isn’t good, because our defense is not designed to hold teams to under 20 points.

You are right. Sitaki and others have said it’s designed to hold others under 24 points as long as we dominate time of possession and turnover ratios. So, we will see Algiers run 32 times while Hall throws 20-25 passes with 75% accuracy and 5-7 yards per pass eating up the clock and keeping Virginia off the field. The key is we have to score touchdowns and not miss field goals.

Thanks Jim, because you have me LOL and it’s a welcome break to a busy morning at work…seriously, thank you for your message!

You are welcome! Seriously it is the vision I get when I think of BYU’s pass rush. The ball is snapped and our 3 down linemen immediately stand up and begin the “pattycake pattycake bakers man” chant as the QB drops back and looks for an open receiver, knowing that he has anywhere from 10-15 seconds to find an open receiver. That is how the “system” works.