Here's your first #BYU depth chart of the season: https://t.co/NwSlxhUylC 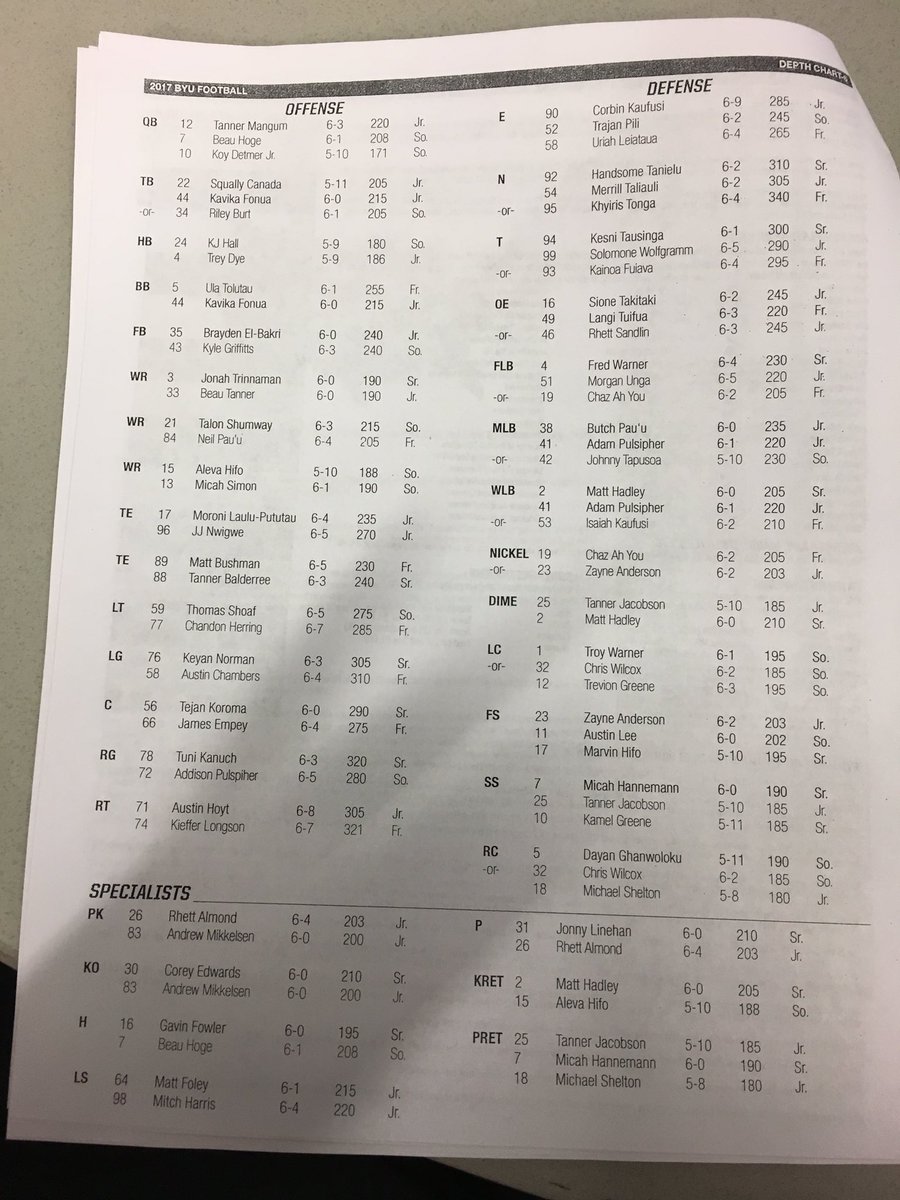 First official depth chart! I don’t see too many surprises, but one thing that stands out in Matt Hadley starting in Francis Bernard’s void. I like the move, I think Hadley’s athleticism will make him a great coverage LB/ dime package. I’m excited to see what role Chaz Ah You can take in this first year.

I was hearing a lot about Micah Simon during Training Camp and less about Hifo, but it looks like Hifo will be the guy as the WR3. I hope he can build off of his Freshman and make some strides.

And Matt Bushman is indeed starting. I am very excited to see what production he can bring after a stellar Spring and Fall Camp. (TE’s are back in Provo?)

Also, Chris Wilcox is listed as an alternative starter at corner with both Dayan and Troy. He had a rough freshman year, but on CC w Wrubell, Tuiaki said he had made significant strides. I hope we’ll be able to see the fruit from his labors this off season.

Any other thoughts? Surprises?

Where’s that freshman tail back Tolutau???

He’s listed as the starting “BB”. Apparently that is short for “Big Back”. So I’m guessing Ty wants to use him as a short yardage back to move chains.

There are 3 starting Running Backs listed. Squally Canada (Tailback) , KJ Hall (Halfback) , and Ula Tolutau (Big Back). The Tailback role would presumably be the guys taking carries on 1st and 2nd down, Halfback appears to be more of a receiving back used in passing packages, and Big Back would appear to be used for goal line/ short yardage.

As Talatau gets more acquainted with the college game and gets his speed back, he will end up as the featured back.

Big Back would appear to be used for goal line/ short yardage.

“Big Back” Ula Tolutau will mostly should be use anywhere when we are at 3rd or 4th down at short yeardage to go. How about “Bigger Back” a 410 lbs player should be inserted at the goal line of Mo Langi. I mean, maybe sometime 1 or 2 times this year.

Maybe. He could always be easily tipped over if his balance while running is poor

I’d like to see a big fast back with great vision and quickness hit the holes.