Keys to a Toledo win

Our Wilson has twice the yardage @ 997, 3 interceptions, averages 1.1 YPA rushing. has a rating of 126 but higher completion rate at 62%. Wilson can also run so this will be an interesting matchup between two good QBs.
Prediction: Wilson has a big day.

This game could be a let down for BYU after 4 big games but Toledo is favored to win the Mac and eager to get some national attention. BYU needs this game to right the ship and set up tough games with BSU and USU. It is a late game, we are used to it, Toledo won the late CSU game. Their stadium seats 26,000
Edge: BYU by a field goal-high scoring game

Late game??? 9:00am is a late game? You must work graveyard shifts?

Which makes it 8 pm MST (which Chris is correct, it is a late game)

On BYU Sports Nation today, the game time was announced as 12:00pm EST noontime. Chris wasn’t correct. But, if you want to pay $5 at 8pm to watch a replay of Suzanne Sommers thigh buster info commercial go ahead.

Just so you know, I took the information directly off the DeseretNews website.

Don’t need too, I have the app on my phone already. 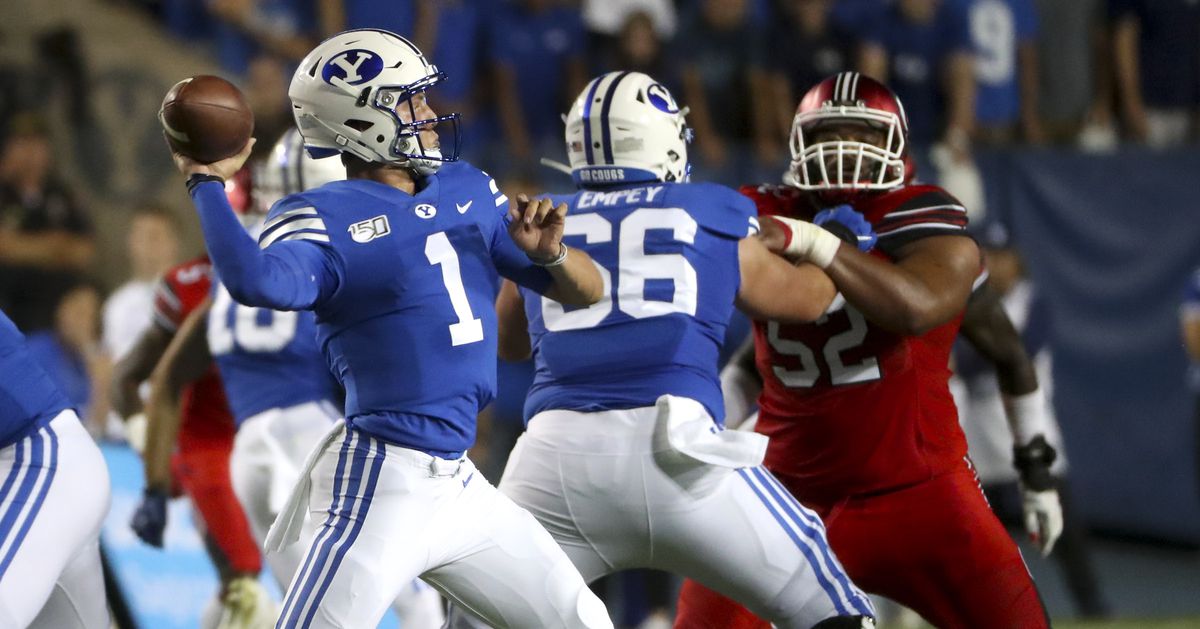 PROVO — Whose reputation is more on the line when BYU meets Toledo on Saturday, the Cougar defense or offense? Both. Offensive coordinator Jeff Grimes sat across from his polite and knowledgeable...

CSU got close to 700 yds of total offense on Toledo, just sayin. They were yards from taking the game into overtime on a long hail mary. CSU failed in getting TDs, traded for field goals in the red zone.

In the Ky game, Guadagni was both the leading passer and game’s leading rusher.

Get a summary of the Toledo Rockets vs. Kentucky Wildcats football game

Wow, you missed a lot on the Toledo game. BYU’s defense took your advise with three and four up front, look what happened. Wilson out passed the Toledo QB, but look who won. We could not stop the Toledo run in the second half. Wilson couldn’t put enough balls into BYU hands in the end zone. I don’t know is Wilson is really hurt or not. But BYU got out scored by Toledo.

Sitake said Hall will start in two weeks. Hurt the thumb while tackling the guy who intercepted the pass.

Near the end of 3rd and all 4th qtr, our defense can’t stop the Toledo and Utah (last November). Same old problem not stopping when you got a win in reach. If we got a lead like that when we play Boise and usu, they will storm back to win against BYU. I like to see something change in the Defense department or leave it alone?

Hurt the thumb while tackling the guy who intercepted the pass

Wilson was suppose to stop an opposing player when coming in his path (pic 6). Too bad he got hurt and now lets hope Hall can take over the QB position.

Bad play calling-bad execution on both sides of the ball-sorry this is getting to be the rule rather than the exception. Lose to USF and probably no bowl. The pressure is on Sitake and Company because right now BSU and USU are losses. Not disappointed in the loss but all the things that led to it

Well, inside the 5 let him go and score. Save 5-10 seconds. The missed field goals became big too. I’m more interested in why our offense can’t sustain drives and why we can’t score 30+ points. I thought Grimes would have figured that out. Instead, we get things like running plays on 3rd and 6.

Wow, you missed a lot on the Toledo game. BYU’s defense took your advise with three and four up front, look what happened. Wilson out passed the Toledo QB, but look who won. We could not stop the Toledo run in the second half. Wilson couldn’t put enough balls into BYU hands in the end zone. I don’t know is Wilson is really hurt or not. But BYU got out scored by Toledo.

BYU is a mess. Bad coaching calls on by sides of the ball. Wilson lets his emotions get the best of him and injures himself. DUMB.

Stupid penalties cost us another game.

We had the talent but because of 4 straight P5 games, attrition has us losing games to lesser talent. Being indy is not fair to BYU or its fans

We had the talent but because of 4 straight P5 games, attrition has us losing games to lesser talent. Being indy is not fair to BYU or its fans

I’m not sure that we have the talent. I think you are making an argument for something not in evidence, counselor!

I also don’t think that the excuse that it’s because we play against too many P5 teams is true, either. I think we would be doing about what we’re doing even if we weren’t playing too many P5 teams — that is, I think we would still be dropping games to teams we should beat, and beating some teams sometimes that we shouldn’t. We have to remember that the other teams game prep and try to win, too. They deserve credit — when we always make excuses, we act like they never play a part in our losses.

I also disagree that it’s all independence’s fault. We weren’t world-beaters at the end of our MWC career, either. I don’t think we would have won a MWC crown since then had we stayed.

The bottom line is that BYU can surprise us on any given week (Wisconsin/USC, or N. Illinois/UMASS). So, there’s always hope and something to look forward to, but also the feeling in the back of our minds that it could be something ugly.

correct me if I am wrong: BYU had 1 turnover, Toledo had 3…
BYU had Toledo on the 1 yard line and Iliaki chose to rush 4.
Chaz Ah Yu tackles the guy 5 yards out of bounds.
BYU throws on 3rd and 1 or 2 on three separate series.
BYW, Oldroyd was very sick before the game. the worse game of his life but its understandable.

BYU was the far better team and underperformed, especially in the red zone. Just stupid play calling on both sides of the ball. This loss is all on the Coaches.

BYW, I lose Wilson but he just does not learn. You would think that after the Utah game, he would wise up. He tries to do too much, lets emotions take over and now he’s injured from it. Oh, well, now Hall gets his big chance.