Keys to the Baylor win

Billed as a top 5 games in BYU history, I personally don’t buy it but here goes.

MVPs for this game are

1 Jaron Hall. played like a NFL talent
2- losing ROmney and Nacua, Chase Roberts did his best Nacua inpersination. The guys big catches were game savers
3- The crowd. The noise led to several drive busting penalties
4- Baylor’s penalties on 3rd downs and especially on that last OT gave BYU the win
5- Our trio of linebackers of Bywater, Tooley, and Wilgar were everywhere.

Other factors:
1 our rushing was pathetic.
2 our vaunted Oline was not to dominate on the run
3 We really really missed Nacua-and Romney
4 Baylor’s Penalties really did cost them the game
5 Zero turnovers or interceptions for either team, I can’t remember a game whereby neither team lost the ball
6 Tuiaki gets a B+ for creative defense, just enough to be a very good Baylor team
7 what the heck happened to Oldroyd?.

Good analysis Fish. Especially your last statement. I think the goal posts were Democrats as they seemed to be moving for both religious schools.

Being that Baylor is a legit top 10 team, maybe we are too. And, this is what happens when two great teams play. Baylor’s defense was better than expected. Nacua and Roberts would have created nightmares for Baylor’s defense. But, we won and gave Nacua another week to heal for Oregon. As far as Romney, I can’t remember the last time he played?

Our line did well on pass protection. Not so well for the run. But, that’s more the Baylor defense. What I liked was our defense. Much better in all aspects against the best OL we may play all year.

after sleeping on it:
This says it all about Hall as a leader, he knelled with Oldroyd then hugged out the win. 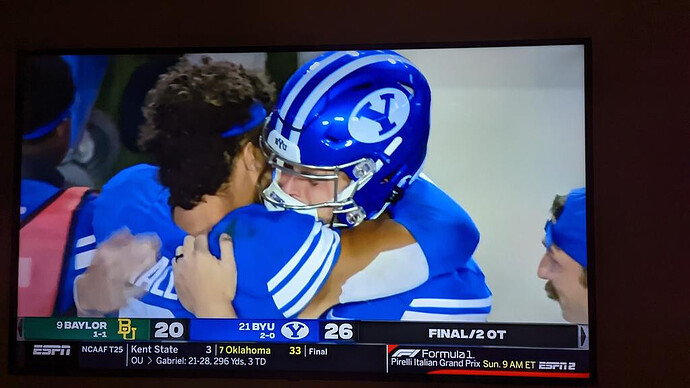 Usually BYU has to play with smoke a mirrors to beat ranked teams. Not on this night. BYU may have been pushed around at times out there. I think that Baylor scored on brutal smash mouth rushing 2 of 3 drive in the second but in the end, BYU held Baylor to 2.9 yards per rush on the night…Thats a stat there!

I would also point out that it I were calling the O plays, I would make Baylor play to the sidelines rather then rush up the middle. Gasses out the 1s big time.

I really have to point out that Tuiaki did a masterfull game plan on this one. to hold explosive Baylor to 20 in double OT is a miracle.

Play of the game by a mile was Roderick’s ballsy call on the Chase Roberts double pass back to Hall for the TD.

Roberts becomes legend with that game.

Now somehow, we have to find a rushing game.

Teams have figured out the end sweep games. I’d like to see our TE used more. Defense was solid and the crowd really helped. We put pressure on their QB even with Baylor’s great OL.

People have watched Roberts in High school and he is the real deal. Even being from Utah, this kid is going to continue the tradition of great WR at BYU.

Tooley, brought the lumber in large supply last night. That kid was everywhere.

Credit goes to our D-line for creating pressure. Love the nasty side of DE Jackson…. But all the D-line, well the entire front seven did well.

Hate the new rule for blocking below the waist by the CB’s that cost us two 15 yard penalties… Guess what the DB coach is going to be talking about this week?

Hate the new rule for blocking below the waist by the CB’s that cost us two 15 yard penalties… Guess what the DB coach is going to be talking about this week?

This new rule really frustrates me…what is a little DB supposed to do when 330lbs is barreling down on him? I get that they want less injuries but DBs are like dogs to cars, no chance

The injuries are going to go the other way. It’s not like they are blindsided. That rule has to go away.

1 stat that blows me away…BYU was 3-17 on third downs so how in the world did we scrape this out? Baylor died by penalty cuts, they should of won the game.

With P12 officials will we be crying next week?

With P12 officials will we be crying next week?

BYU football went undefeated last season against P 12 and we should be fine.

BYU football went undefeated last season against P 12 and we should be fine.

That is the very reason why I bring it up. P12 refs and BYU humiliating the conference of champions.
go ask Baylor how they lost the game…Watching the baylor game, I was amazed how good the refs were and how fair they were. I can’t say that when I watch P12 game reffing

This is another consideration and may be the reason for Oregon being a 3.5 favorite.

Now somehow, we have to find a rushing game.

I pointed out earlier that BYU faced the #6 ranked defense nationally. Let that settle in while we talk about BYU’s lack of rushing in the Baylor game.

BYU’s running game was not good. In fact, it was worse than last year against Baylor. While that is disappointing, it’s not anymore of an indicator of BYU’s rushing attack than last years game was. BYU’s offensive line is special, but they went up against an equally special defensive line. Imagine being asked to move a 368 pound human being. Imagine trying to move a 368 pound anything. That was BYU’s task on every single run play, and it ultimately resulted in a stalemate. I’m not worried. That is likely the best rush defense BYU will play all year."

I am not buying the Tui influence on D. Sitake had the prep time available and headset on the entire game when the D was on the field. The issue has always been that when things got all messed up on D that Sitake would come bail them out. When you have games every week that stresses a coaching staff and Sitake ont have the same time available to zero in on Oregon that he did with Baylor. He had the same issue last year with Utah right off the bat. If BYU can come with this Baylor type quality of D the next 3 games I will give Tui some credit for learning from his past debacles!

I get it. Last year we played a masterful D on Utah the fell back into mediocrity. But…Last year BYU suffered so many key injuries losing Tooley, Wilgar, Pilli and had to call up a very raw Bywater to start. Far different picture this year.

Don’t forget our best DB last year Kenan Ellis… Had to medically retire after the hit that he took.

That was a big loss to the defense.

We also lost Herron and Willis to medical retirement as well.

yup, first thing out of Sitake’s mouth was that we escaped any major injuries in the Baylor game.
Still can’t find news on Batty (stomach muscle strain), Nacua or Romney?

I know the injuries probably impacted the whole scheme. But I am more worried about the fronts and lack of adjustments that Tui is so terrible at. I have just one example of how bad he is …… the Virginia game. Tui was the embodiment of the first half. Sitaki took over the second half. There were no injuries or any excuses in that game. Tui was just awful. I simply don’t think he is very smart. The next 3 games will give us a lot of answers.

What makes one smart? Experience, personal study, clinics, mentored…and the other thing, the level of players based on recruiting, teaching, training and injuries. I know from coaching, the ability and intelligence of the team gives the coach the abilities to make game time adjustments and even productive game plans. This year, we have this.

A good DC makes a bad DC look smart. Explain the UVA game. It is Sitaki not Tui. Let’s let time show us what will happen.

And that’s the point. It’s been a couple of years and 5 for the DC coach. So far this year, he’s looking better. Time will tell and Oregon will be another great test.