Meanwhile, there is more then one way to recruit a Cat Utah's last 2 @DNewsPreps "Mr Basketball" on the same team for now..Elder Wade and Elder Haws on exchanges in France https://t.co/im8OafZRVx 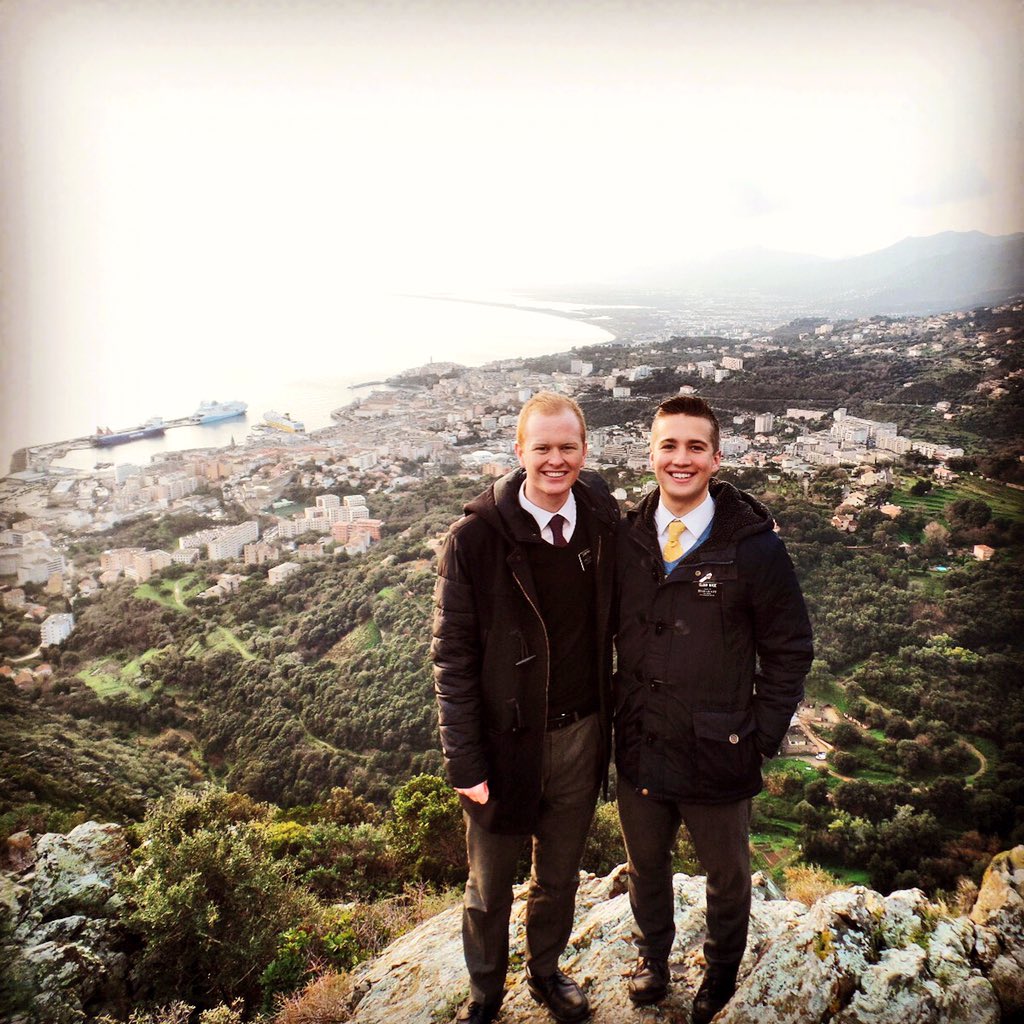 TJ Haws with his companion, Elder Eric Wade, a commit to Gonzaga, ranked in the ESPN top 100.

You don’t think that the brethren in SLC have a sense of humor? One local sports caster put it this way,“The best jump shooter I have ever seen is companions with the best baller to ever play in Utah”. What are the odds…and do you think Coach Few will miss the humor in this photo.

Um, I’m not sure Mark Few will think it’s funny at all

I think with TJ we got Frank Jackson, except as an RM who will play at least a couple years. TJ destroyed AAU teams across the country very similarly to the way Jackson did.

That’s all fine and dandy but I want to see how TJ plays as part of a team because we don’t need any more record breaking individuals that have no idea what chemistry means to winning a championship of any kind. Let’s start with a wcc title sometime in the next few years and then we’ll talk about making some noise in the ncaa tournament. The round of 32 would be great and a sweet 16 run would be fantastic.

Well the Lone Peak boys had chemistry in high school and AAU. Hopefully they find it once they are all back together again.

Absolutely agree. That is the primary reason they were so successful on a national level. Their team was not made up of a collection of fantastic individual talent. Yes, they had some good players, but I believe there were far more talented groups of players they played that they were able to take out to the woodshed and deliver a serious beating to.

Because each player on the team, not just Mika, Haws and Emery, knew and understood their role and never tried to do it all on their own.

This years BYU team has lots of talent. KC is very talented, there may not be a player out there with a smoother shooting stroke than Fischer and they have Emery from that Lone Peak team. They just simply don’t play that well together on a consistent basis. Sometimes they lose focus because there is a record to be broken or a need to be the hero or a frustration with a younger player. Those are the reasons for missing easy shots, layups and free throws… lack of focus and concentration, lack of understanding for what it takes, lack of chemistry.

That is a good point Kay.

KC is in not way a true point guard…TJ is.

Plus on TJ, he for sure don’t makes dumb mistakes like TO’s, brick shots and Mattie me.

Good to see you are joining my way of thinking. Although, when there is a record to be broken the game was already won. So, the players helped for player to set a record. Big deal. No focus was broken. Instead, the team came together for it.

Lone Peak starters were 4 star athletes and isn’t Anika a 5 star? They were full of talent and they were smart kids too.

The only thing KC doesn’t do at the point is shoot midrange and 3’s. Other than that, he does more than other point guards do.

Good to see you are joining my way of thinking.

Not sure what you are referring to, I do agree with you on some things and I have said as much. Interesting that you only agree with me after you think I have agreed with you, which is kind of disingenuous.

Do you have some informative proof that backs what you are saying here? I’m sure it is not accurate but you have the burden of proof because you said it.

The only thing KC doesn’t do at the point is shoot midrange and 3’s. Other than that, he does more than other point guards do.

Actually that is not true. He lacks the quickness of many point guards and when he penetrates he turns the ball over… a lot. He for sure out rebounds every point guard in the nation but that is not typically the role of a point guard. Perhaps one that is breaking records for triple doubles but not one that is making his teammates better and winning games. Like I said before, BYU has perhaps the best all around player to ever play at the school right now and it isn’t translating into any significant wins. That is a problem, one that is a result of selfish play too often. Not all the time mind you, just often enough to make it a problem.

That is accuracy in observation if there ever was… take note.

I only agree with you when you are actually right

KC: 154 assists to 74 turnovers - 2:1 ratio. Not so bad. 3.5 turnovers per game and 7.3 assists per game. For a player that handles the ball the majority of time, he’s done a fine job at the point. That’s better than Fischer and Emery. So, I question your authoritative attitude

Other than that, he does more than other point guards do.

This is the quote I was referring to and the one that brought out my authoritative attitude. KC does some good things but he is not a point guard. For whatever reason Rose has him playing that position and role, likely because it has allowed him to bring publicity to an otherwise mediocre team with all the triple double stuff going on. The truth is that if he had been “doing a fine job at the point” the team would not have lost some of the silly games they have at this point. Who should I start with? LBSU? Harvard? or Portland?

Don’t get me wrong, he is a great player, he just isn’t the best point guard out there… actually not even close.

Rose tried others at the Point. They just turned the bal over at a much higher rate. This team reminds me of the Lakers 5 years ago and Cleveland today. The point guard doesn’t run the plays. Kobe and Lebron did. They ended up as the ones with the ball the most because when they have it, the ball was turned over less than when their so called point guards had it. Same with BYU today. KC is like 3rd in the country for assists? At least pretty high up there. The only thing he can’t do as a point guard is shoot the outside shot like most do.
Unlike Kobe who got the ball down on the block and the elbow, he could fall away jump shoot with accuracy. Kyle goes to the paint all the time and manages to score a lot.
Keep coaching and move up to high school. You will begin to see the game from a different perspective and understand better

So you are talking about “other point guards” on the BYU team?

Who might that be? It doesn’t matter because KC is the best point guard on the team… he is the ONLY point guard on the team. Nobody else has gotten any real minutes at that position and in today’s game it is a critical spot that helps determines a teams success. They are like the quarterback. Just so there is no confusion here, and I have said it more than once, KC is a very good basketball player… maybe the best all around to every wear a BYU uniform and certainly worth debating.

Also, coaching high school basketball at St. Bonny, particularly the JV team, 30 years ago is akin to coaching rec. league today. The talent and skill level of Bonny players back in the day was about the same level as junior high rec league players today. I know, I officiated some of your games, right?

LOL!!! No, the talent was just as good in 1990 as it is today. The only difference was many of the years we had no 3 point line. Other than that. We actually had players that could perform the basics much better than the sloppy game that it has become.

The other players were given a chance. Plenty of chances. They weren’t as good as KC and still aren’t. You put your best talent and producers on the court for as long as you can. One thing that has changed in the NCAA is that early games have become more important because of the way the tournament at the end is run on deciding who makes the big dance and who gets the little table at the family reunion

You haven’t watched many high school games lately have you…

The advent of club and year round basketball, camps, high profile travel teams etc. has changed the parameters and the skill-set of players today as compared to 25 years ago.

I hate to burst your Bonny bubble but only 10 years before 1990 I played high school ball at lowly Villanova Prep and we used to beat Bonny regularly. I was a good player but my skill set doesn’t even compare to kids today, who are bigger, taller, faster, stronger and more athletic than kids from 35 years ago. Athletes across the board are the same. Don’t want to argue the point, you just need to accept the fact that it’s better than when you were a kid too.

And then when Mark Groff took over the program that all turned around. SB won the games.
There was ample opportunities for kids to play year round if they wanted to. We encouraged kids to play other sports being a small school. But they had off season leagues to play in based on what CIF would allow. They had camps to attend to for all ages then too.
Funny though how kids come out of grade school to high school and high school to college now days lacking some basic fundamentals that they didn’t back in the past.
Coaches must not be as good today as they were when I was coaching

I’ve said numerous times that the game has devolved… or gotten more sloppy, etc. but that doesn’t change the FACTS that athletes are bigger, faster and stronger than they were 30 years ago. The advances in nutrition, weight training and other things are directly tied to these FACTS.

As for “Mark Groff”… how many CIF basketball titles did Bonny win? I think it was… zero?

They have become a football school over the years. The basketball program is very average.

Believe what you want to believe. Athletes worked out decades ago too. Maybe not at preppy schools like Villa Wafer school but at Bonny they did. Buena they did and so on.
The year before Mark took over Bonny won 2 games all season and the coach was fired. The next season we won 20 games. The year we had a chance to go further into CIF we had to go through Santa Clara and Shaun Tarvor. No one beat them that year. One year we got a couple of wins before having to play against Mitchel Butler. They didn’t lose a game that either. Mark was a straight Honest person and he didn’t bend and break rules like Mack did in football and coach C did at SC. I enjoyed coaching with him.