Check out this article: Clay Travis analyzes Texas and Oklahoma to the SEC 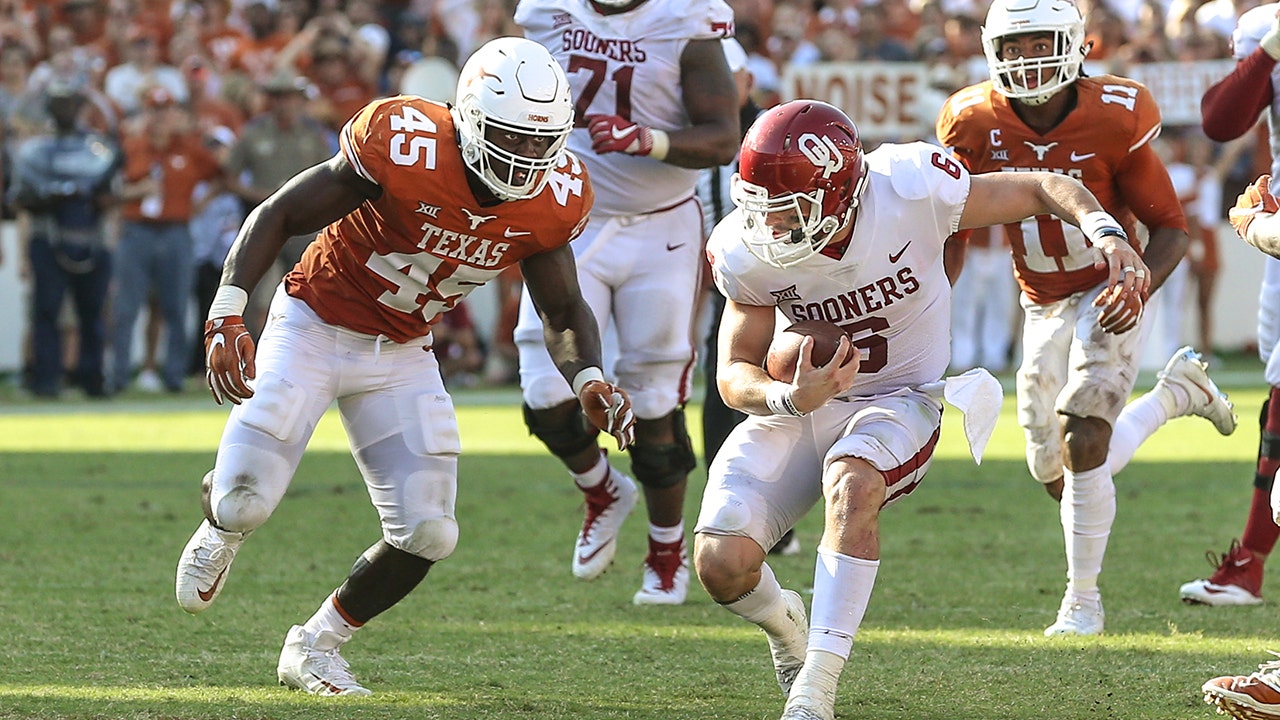 Clay Travis analyzes Texas and Oklahoma to the SEC

"if the Big 12 finally implodes, what might happen elsewhere with other teams? You can see a move where West Virginia and Kansas could make sense to the ACC, for instance, to get the ACC to 16 teams as well. How about Notre Dame and Kansas as full-time additions to the ACC? The odds of the ACC standing still are slim, I think, if the Big 12 implodes.

Meanwhile, could the Big 12 try and expand and add BYU, Boise State and Houston in an effort to protect itself? Definitely.

Could the Pac-12 make a run at Kansas, Oklahoma State, Baylor, and Texas Tech to get to 16 teams itself? What about BYU and Boise State to the Pac-12? And how would the Pac-12’s academic standards play in here?"
Any thoughts?

Not sure Texas would go, because of their exclusive TV contract, Not sure they would want to give that up. That is what prevented them from bolting before.

I won’t get my hopes up about a P5 invite.

Floyd, Clay Travis addressed that very concern in that article, He stated, "Can Texas and Oklahoma get out of their Big 12 TV contracts with ESPN and Fox?

Yes, in four years when their existing TV contracts expire in 2025, every school effectively becomes a free agent. The grant of rights agreement ceases to exist at that point.

But what about Texas’ Longhorn Network agreement?

That deal runs with ESPN until 2031, but ESPN controls the Longhorn Network and ESPN also controls all the rights to the SEC for the next 20 years.

I am not getting too hopeful, because the P5 Conferences have let their unwelcoming and somewhat hostile feelings toward BYU be known in the past, but with the information in this article, my meager assessment of their chances of getting an invite went from 10% to a whopping 20%. Just my opinion, but it seems clear that a shake up is in the works and it looks like ESPN is set to be a major player in the game. They seem to have a soft spot for BYU. It can only help…

No more P5 coming up soon? maybe we will see 16 teams super conferences. For example - Cross out P5 and new S4 (Super 4 conferences).

There was a discussion 10 years ago about having 16 teams confere groups (SEC ACC Big 10 & PAC).

No I don’t like that idea but we shall see.

I don’t like the idea either, but here is the latest update:

Thank you BYUcanpass for your article by Clay Travis, FOX News.

Yes, yes, yes. I have always wanted BYU to join a P5 conference from the very start of the P5/G5 division. I just never wanted us to be in the Big 12. (History of always being too unstable). With both Oklahoma and Texas going to the SEC, the SEC will become a dynasty conference much like Alabama has become a dynasty team.

Ron, I have a wish, like you and MANY BYU fans, to see the Cougars become part of a P5 conference, or what ever group comes out on top after the “feeding frenzy” that may very well occur, with P5 conferences tearing each other apart, merging with other P5 conferences, and, possibly even asking the best of the G5 and Independent teams to join. Don’t ever be mistaken that fans, tradition or past loyalty to other teams or institutions will have any effect on the final outcome. This is BUSINESS and chasing MONEY is what drives the outcome. When the dust settles, the fate of BYU will be determined by the bottom line: will having BYU in their conference be more profitable than NOT having BYU in their conference? The PAC 12 conference has demonstrated in the past their disdain for BYU when they chose the Colorado Buffaloes over BYU when they invited U of U to join. I doubt their attitude has changed much since then. This will be by invitation only! Be careful what you wish for…

No one wants BYU; therefore, BYU will never get an invitation. Many universities treat BYU as college football’s equivalent of a local prostitute: They’ll pay to play with us, but they’ll never marry us. And just like the prostitute, somewhere along the line BYU will get screwed.

Let me see if I can get that visual out of my head?

That is all I can say about it.

Same to them but more of it

I had an interesting conversation with someone in Utah AD office who happens to be my neighbor and long time friend.

When Utah was invited to the PAC-10 (then), The schools wanted BYU to come along as well because of the natural rivalry with Utah. The school the blocked it? Stanford! Why? because Stanford dislikes interrupting the players class schedules (for all sports), so they play Friday and Saturday and Sunday games. That way the kids are able to go to class and make the trips to the games on either Thursday night or Friday and home for classes on Monday. BYU refusal to play on Sunday for religious reasons is why Stanford nixed the invite.

What he has heard is that with Texas and Oklahoma leaving, Stanford is looking into go to the Big12. (Not sure that is a good idea right now). If that happens! it opens the door for BYU to come in.

On another note, he mentioned that “Texas” is a corporation that pays University of Texas the rights to use the school name. I think “amateur” sports is a thing in the past.

I think “amateur” sports is a thing in the past.

Really???
Once sponsorship is allowed, $$$ invades every crevasse. Sabin claims that his QB, that has never taken a snap yet, is a millionaire. If BYU wants to get into the “future”, They will need to allow sports agents to look after player’s earning potential or have full time publicist or promoters help our athletes land sponsorship deals.
I see HS deals coming. All of these changes will spur on the rush to super conferences and end of sports as we know it. The NCAA is a relic that sucks on whatever $$$ Teat it can latch onto.

I won’t get my hopes up about a P5 invite.

BYU has a lot of value. look at this little write up
BYU Football: Cougars have better TV ratings than Big 12 (lawlessrepublic.com)
so, unless you are Oklahoma or Texas, BYU spanks all the the Big 12 in eyes on TV sets. I would think that the same thing happens when compared to the P12, if we take Oregon or USC out of the picture.
BYU should be in a P5, end of subject.

Overall, from a historic standpoint, the Power Rankings would be:

What he has heard is that with Texas and Oklahoma leaving,

ESPN has been courting OK and TX to jump to the SEC (ESPN owns the TV rights to the SEC). Then ESPN is off the hook for the 1 billion + contract with the big 12…They deny it. Big 12 fires out a cease and desist letter. Ok and Tx both had both said that they will honor the 2025 contract, then bolt…someone is lying.

ESPN won’t stop with that, they also will go after OSU, USC, Oregon, ND., Clemson. See the big picture? Where BYU is standing after the dust settles will be most interesting.

“Best article I’ve seen on all of this said ESPN was the main mover-and-shaker orchestrating the Texas-Oklahoma move. The article said ESPN wants to corner the market on college football games that draw the biggest viewing audiences. With the addition of Texas and Oklahoma, the SEC (whose TV rights ESPN will own) will have more matchups with the top 10 or 20 viewing audiences every year than any other conference. (ESPN will also hold the TV rights to the CFP that they will want to expand.)

“Broadcasters couldn’t care less about matchups like Washington State-Arizona, Kansas State-Texas Tech, Northwestern-Indiana, or Wake Forest-Boston College. They want more games like Oklahoma-Alabama, Texas-LSU, Michigan-Notre Dame, Clemson-Ohio State, Oregon-Georgia, USC-Auburn. (Sorry. the only BYU game and Utah game they really want is BYU-Utah. And even then, its not going to be an Eastern Time Zone prime-time matchup.)”
BYU football: Will BYU be part of conference shakeups? - Deseret News
1 conference with mega ratings controlled by ESPN.