This is just what we are going to get with this young team…minutes of brilliance mixed in with a lot of head scratching. 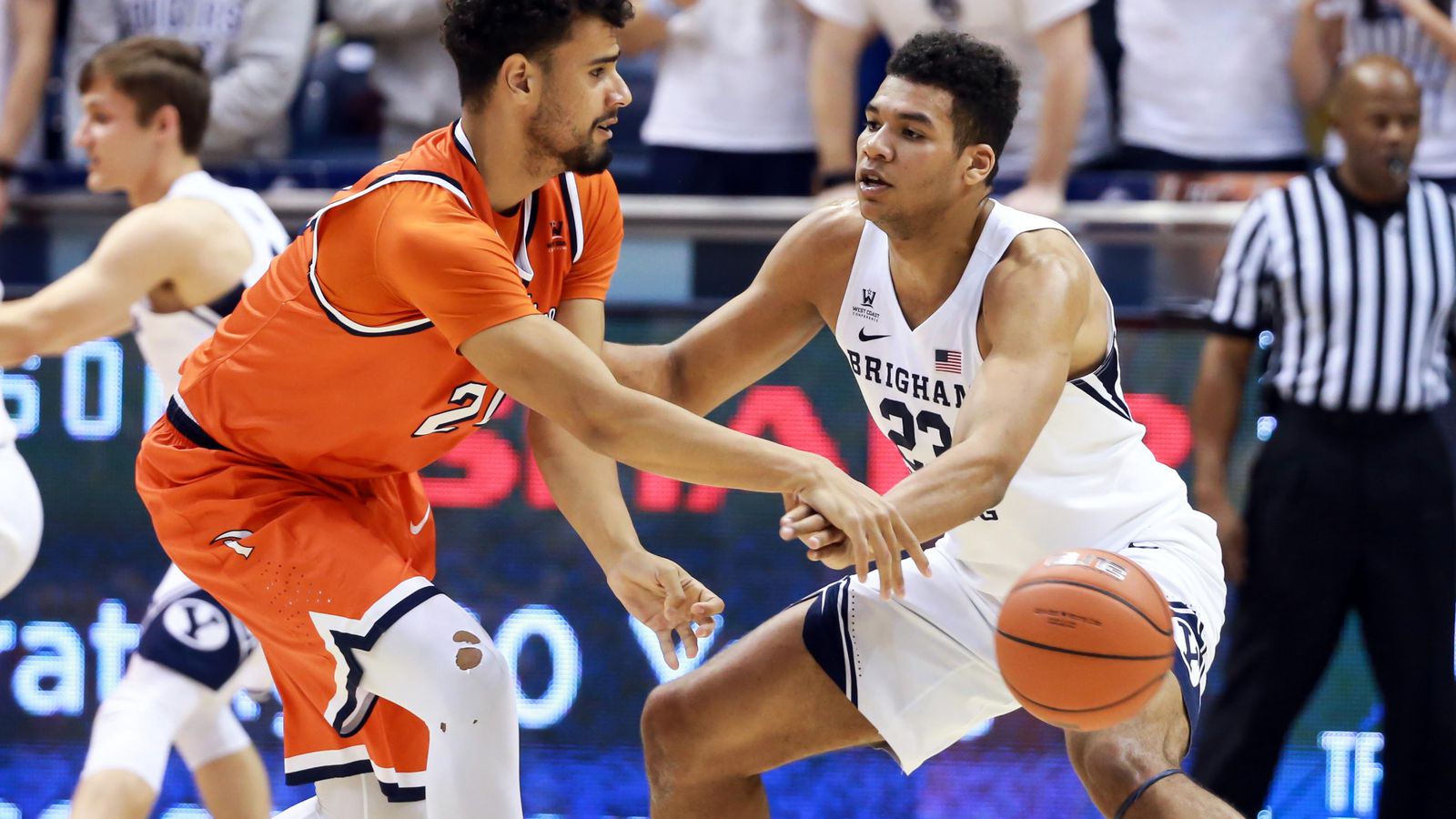 BYU trailed for most of this game dealing with foul trouble, player illnesses, and a general lack of focus and enthusiasm. But Davin Guinn came out of nowhere as the 1-3-1 defense saved the day.

I thought Childs had his best BYU game and he sure looked like he got more than two swats.

Guinn IS the defender that BYU needs. He can harass their best player all the way up to weak forward. His offense is lacking but Rose does not need 5 scorers out there, he needs good D.

We found out the 1-3-1 can be successful IF you have the right guy playing the point…We tried with Haws, total disaster, Rose thought that Bryant would work because, like Guinn, he is long but FAILed again. The reason? Guinn is not “Saving” himself for offense so he is sprinting to defend whereas Haws and Bryant could care less about burning themselves out chasing the top…makes perfect sense to me. Those last two steals were the game clincher.

Mika, no player 6-10 can run the floor like he can and do the things he does. Several times he out races the field back for a dunk. Mika is a foul creating machine. Every team that faces BYU has to plan for their bigs getting into foul problems. Portland may well have won the game if Mika had not fouled out their rebounders and inside play makers.

Bryant and Emery were pathetic in the game. Beo frustrated and Leifson, just not ready for college basketball.

WCC rec reffing raised its ugly head in a big way, a slew of missed or wrong calls on both sides, both Childs and Mika had reason to wring their hands with no calls…just pathetic.

BYU will lose one of their road games this week- at SF.

The real difference of Bryant/Haws and Guinn is not the level of their hustle. You are wrong on that. The difference is their overall strength development. And you are correct that we don’t need 5 that can score.
Rose is a strong player that saves himself for offense even though he doesn’t score much. He could handle the point but puts little effort into defense.

The real difference of Bryant/Haws and Guinn is not the level of their hustle. You are wrong on that. The difference is their overall strength development. And you are correct that we don’t need 5 that can score. Rose is a strong player that saves himself for offense even though he doesn’t score much. He could handle the point but puts little effort into defense.

Can somebody explain what grasshopper is saying here? It makes no sense to me.

You need to first read his post. Then it will make more sense…well, maybe not because it’s not in you. I’m surprised you didn’t bring up a conspiracy:-)

Nice summary! You can see how effective the 1-3-1 can be if you have the right guy on top. Guinn showed the whole team what can be done with a frantic level of effort. Guinn did an excellent job of tracking the hands of the passer and timing his jumping. Offensive players are taught there is typically an open passing lane above a defender’s head because they have a hard time getting their arms all the way up (vertical) to take away that pass. Guinn did a great job of taking that lane away by timing his jump perfectly and getting his arms vertical to take away that lane.

I don’t know why BYU started the game so flat. They didn’t have much intensity. Portland was bent on limiting Mika. They decided to try to play Mika physical while the Portland coach worked the refs to try to keep them from calling a tight game on their defense around Mika. It worked for awhile. Mika resorted to shooting his jumpers and fade away shots which are not his strength at this point of his career. Credit Mika for eventually taking it right at the defense and fouling out their two bigs.

I’m glad BYU was able to find a way to win when they were having an off shooting night. Emery is supposedly feeling better but he hasn’t been able to find his shooting touch the last two games. I agree with you that BYU will drop a game this week unless Emery gets his offensive game on track again.

Both basketball and football have been starting every game slow for years now. They also come out after halftimes and do the same thing.

Good point! I can see the players being tentative at the start of a game because they are sizing up their opponent and trying to figure out the defense and how they are going to play against certain players. That, to me, is just a sign of a lack of confidence. When players are confident, they feel their game plan will work, they feel they have a good idea of what to expect based on film and they are confident they can impose their will on the other team. To me, its just a matter of experience and gaining confidence. These slow starts are getting into their heads a bit and they’re finding there are no “gimme” games. They have to bring it every game.

I can see the players being tentative at the start of a game because they are sizing up their opponent and trying to figure out the defense and how they are going to play against certain players. That, to me, is just a sign of a lack of confidence.

typical of a young team. Old veterans know how much “juice” they have in the tank and rarely play at their peak, always keeping some in reserve for the true grind at the end whereas youngsters come out blazing and when that does not work, they get frazzled. You can always inflict your will on young guys whereas veteran players stay the course and wait for moments in the game to pull away.

I may be harping on Haws about his defense but I have no doubt that we will see a different player by next year…the guy that concerns me most is Bryant, he has the experience to know better when he is playing the point and continues to underwhelm. Hopefully this is all rust.

Emery just tries to hard to get steals and that often backfires.

I like Glenn’s use of the word “frantic” to describe Guinn’s hustle. Guinn not only hustles but he is as strong and athletic as Emery but much bigger. I normally HATE our zone. I credit Guinn for 1) making the swing passes difficult and 2) hustling over to the shooter in time before the rest of our guys have to do the Rotation Of Death Dance. That said, it WAS UofP, by far the worst team in the league.

Mika is awesome. ManChild could go down as one of best BYU PF ever (although Fred Roberts set a high, HIGH bar if anyone wants to claim the title as GREATEST BYU PF ever). Haws has lots of creative and athletic ways to score and is fun to watch when he is assertive. I don’t know why Emery has been so bad for so long (still hurt??). I hate games when the WCC Clowns disguised as refs call 52 fouls; I get that TP had a plan to foul Mika, but for heaven’s sake there were at least a dozen WEAK calls off the ball or underneath on MADE shots that had no impact on the game, other than to foul guys out for no reason. That is why the WCC sucks–it thinks its officials are more important than the players.

Speaking of officials who suck…Gonzaga won fair and square, but we actually outscored them when Karnowski was on the bench. It would have been interesting if Big Nose had called the most obvious offensive foul in basketball history on Karnowski with 13 minutes to go in the first half when he absolutely steamrolled Mika to clear him out for a layin. The play was isolated, clear line of sight, with plenty of reaction time, with Big Nose staring at it from 6 feet away. That would have put Big K on the bench for the rest of the half. Instead, K wore us out in the first half and they built that big lead. Jus sayin’.

That is true for our offense. My feeling is with our defense. We need to start off with a full-court press and half-court press to get the feet and brains moving from the start. We have nothing to lose. We know good defense leads to a better offense.

Ask grasshopper… he thinks he is making huge improvements.

I hate games when the WCC Clowns disguised as refs call 52 fouls; I get that TP had a plan to foul Mika, but for heaven’s sake there were at least a dozen WEAK calls off the ball or underneath on MADE shots that had no impact on the game, other than to foul guys out for no reason. That is why the WCC sucks–it thinks its officials are more important than the players.

If the officials hadn’t fouled out 2 of Portland’s big men, BYU might have lost that game. Mika was forcing everything and not very effective other than getting calls left and right. I thought Portland was robbed of an opportunity to win the game because of it.

Regardless of which way the calls go, I don’t want to watch a basketball game with 52 fouls. There is no flow, and we wind up with an ugly game like we saw. WCC refs seem to do this far too often.

And I hate it when Dave Rose said WCC is ‘a good fit for us’
And we have seen so many drama like rec refs, rec gyms and the darling Gonzaga. No P5 and I wonder if we should join the WAC league in all sports except football. Can’t stand Craig Thompson of mwc! Or should we try to join AAC in all sports. We are doing fine in all sports except basketball of wcc.
Our bball team this year are young, inexperience and PUZZLING! As expected we should be in 3rd place as usual. Wait till in two years if Mika sticks around. Now I feel better!

I understand exactly what you are saying. I don’t like it either.

Unfortunately I don’t think there are specifically “wcc refs” because I see many of the same officials doing Pac-12, Mountain West and Big West games. If I were to guess what is going on, I would say that ALL of the officials are pulled from a big pool and given games in specific geographic zones, not specific conferences. I do believe that the more seasoned officials typically do the higher profile or level competitive games and conferences generally but I don’t think officials are necessarily assigned to a specific conference.

I could be wrong but that is my perception.

Ask Harold, he always seems to know everything.

Jim; I could be wrong but that is my perception. Ask Harold, he always seems to know everything.

SG: that’s precious! Coming from someone who is never wrong and knows everything

Coming from someone who is never wrong and knows everything

Apparently the Big Sky joined the Western Conferences Referee Consortium this year…
Now it appears to cover every Division 1 Conference in the west.

The referees officiating the Arizona vs. Gonzaga game did not seem familiar with the new alterations to rules for the 2016 season made by the Western Conso...

Doesn’t mean anything if there is no animosity in the minds and hearts of the referees. Where are the faxes, emails, phone calls, tweets…to prove a conspiracy?

Once again your post is completely irrelevant to the current topic of discussion.