I get the sense that Ed Lamb is doing a lot behind the scenes to help this program move forward…as he should being the assistant Head Coach. But, Sitake is a coach without an ego and he lets his assistants do their jobs. Spring ball will focus on coaching technique and improving the skill levels all around. Players continue to be evaluated at different positions to figure out their best fit for this team. I love Sitake’s idea to take the team to St George for a practice (along with some recruiting, fishing/recreation and as a show of appreciation to the local fans). I also like the fact that Sitake was at the Provo airport with about 200 fans to welcome home the basketball team after their big win.

Last year, Detmer gave Mangum headsets on the sidelines during the games.

Detmer wanted Tanner to hear what was said between the spotter in the box, and him… That way Tanner could learn the “Why” behind the play calls…

Hmmm. Makes sense to me. From what I’ve heard, Tanner needs to really catch-up with Detmer on how to run his offense. It may be that QBs will have to study and be groomed for a couple of years before they are ready to run the show. Tanner didn’t have that luxury last year. I hope we see a big leap in his progression from a year ago.

Like you, I totally love all the coaches that we now have. I love the idea that, as you say,
none of them have an ego that gets in the way of doing a great job coaching. I love that
We have an assistant HC, Ed Lamb that has HC experience and Sataki that is brilliant with his recruiting, Tye Detmer, our Heismnan Trophy winning and instant name recognition with his hall of fame accomplishments to be our OC and QB coach. I love having another instant name recognition with another Hall of Fame Ben Cahoon to help our receivers. Our DC is doing a good job as is all of our other coachers. None have caught the hoof in mouth desease and all are plesant to llisten to and to talk to. We have a great team and a great schedule and I am very pleased and optimistic obout our future.

A new wrinkle in Spring ball is that Tuiaki is now coaching the defensive line and Steve Kaufusi is moving over to coach the linebackers. Now we hear that Sitake is helping coach the linebackers. Is this just a “non-issue” or is it more than that? Kaufusi coached the D-line for 30 years and now Tuiaki has taken over. The fact that Sitake is so careful to say positive things about Kaufusi shows what a good “people person” he is. Anyone have the inside scoop on what’s going on with the coaching changes? Is Kaufusi not meeting expectations? Maybe Sitake just wanted to mix things up a bit.

I don’t think it is an issue right now.

I was curious about Motekiai Langi and his journey as a BYU cougar. After all the fanfare with his being offered a scholarship and his utube clip where he had a foot race with his missionary companion, I was wondering if he was legit or not. According to the link below, he will be joining the team in the Fall.

? Kaufusi coached the D-line for 30 years and now Tuiaki has taken over. The fact that Sitake is so careful to say positive things about Kaufusi shows what a good “people person” he is. Anyone have the inside scoop on what’s going on with the coaching changes?

I think you will find the answer in the first sentence…30 years. He could be retiring in the future but I have no inside info. This I can say, Sitake would not have kept kaufusi on if he did not have the right stuff. Love our coaches, top to bottom. Really love the fact that Sitake supports the other sports.

You make a very valid point. I suspect that Sitake has good reason for the move and it has nothing to do with Coach Kaufusi not being up to the task. Yeah, I love this coaching staff too! You probably already read about Mike Empy’s story and why he wanted to leave a successful career with Stryker Mountain West to get back into coaching. 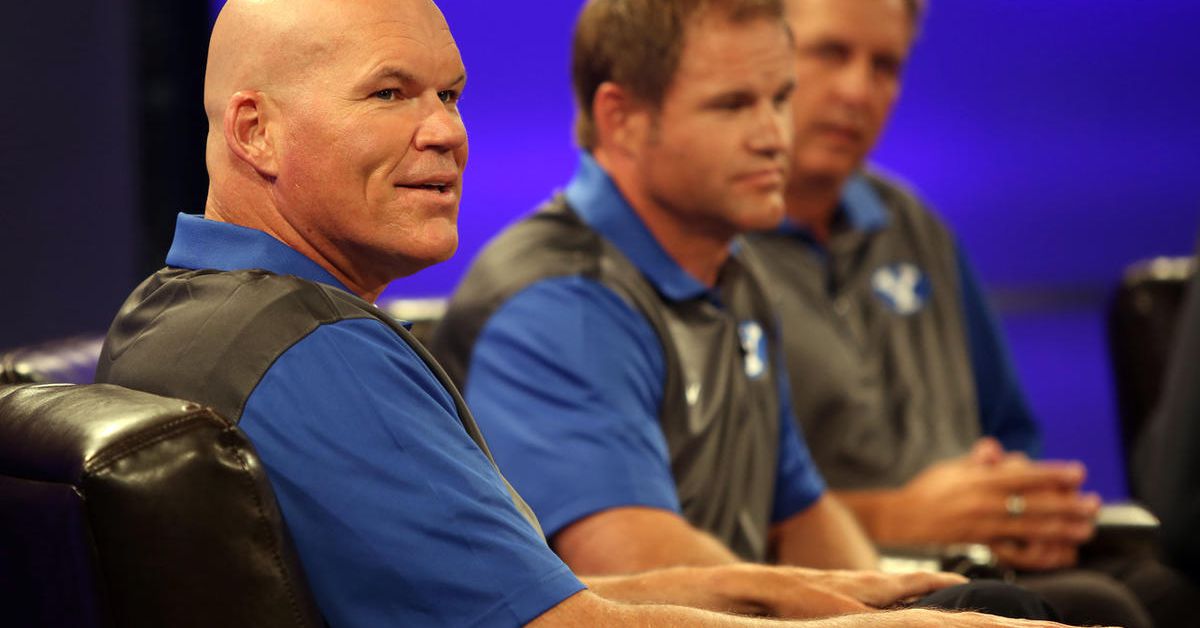 Why BYU's Mike Empey came back to coaching after 12 successful years away...

In 2004, then BYU recruiting coordinator Mike Empey left college football. In 2016, he returned as Cougar offensive line coach under Kalani Sitake and coordinator Ty Detmer. It's an unusual story that has paid dividends for both parties.

I too like everything about this fb staff. The attitude is outstanding. They are good, hardworking recruiters. We will be fine as they build the program. Wish the basketball program was cut out of the same mold.

Did any one else see Butch Pau’u comments on talking sports?

David James asked “When most players make a big hit on the other team, they get up and do something “raised fist” “dance”, etc… when you do, you just smile, what’s up with that?”

Butch response (as best as I can remember) “My mom and dad told me I must be a humble football player and not be “cocky”, so I just smile”…

What a great kid…

I read a tweet today, Sitake quotes, “Kaufusi coaching the linebackers is now able to teach the LBs what is going through the Dline’s eyes”. The game goes through the Oline and Dline so it makes sense that Tuiaki switched to coach the line. Everyone is saying that this LBer core could be the best BYU has ever had with Pau u, Bernard and Warner.

That all makes sense. The new Kaufusi kid (back-up to Bernard) made his presence felt in the Spring game. It looks like Sitaki is building depth at every position. The new JUCO cornerback (Trevione Greene) could be a great get at 6’4". It doesn’t hurt that he’s a 100M sprinter on the track team. BYU needs all the speed we can get. Sitaki’s recruiting class wasn’t rated all that high but when you take into account the kids transferring in you have to be impressed with who is coming on board. I was sad to see that Takitaki is still not on the team. He must have some ongoing problems. I hope he can work them out.

One other thing that Sitaki did that caught my attention was his effort on BYU Pro Day. The scouts were very impressed with how BYU ran the event. Plus, Sitaki is holding a “mock” Pro Day during the summer so his players can get acclimated to the whole ordeal. What a smart move! Bronco talked about his disdain for the allure of the NFL. It is important to these players and recruits and if they feel the coaches will help them develop for a shot at their dream, why wouldn’t you try to make it happen for them. That means having a focus on developing players that can score well on Pro Day events and moving them into positions where they fit best for the NFL.

I was sad to see that Takitaki is still not on the team. He must have some ongoing problems. I hope he can work them out.

I thought he will be back for 2017 season. Found this article from Vanguish in Nov 7, 2016. Did something happened which I hope not? 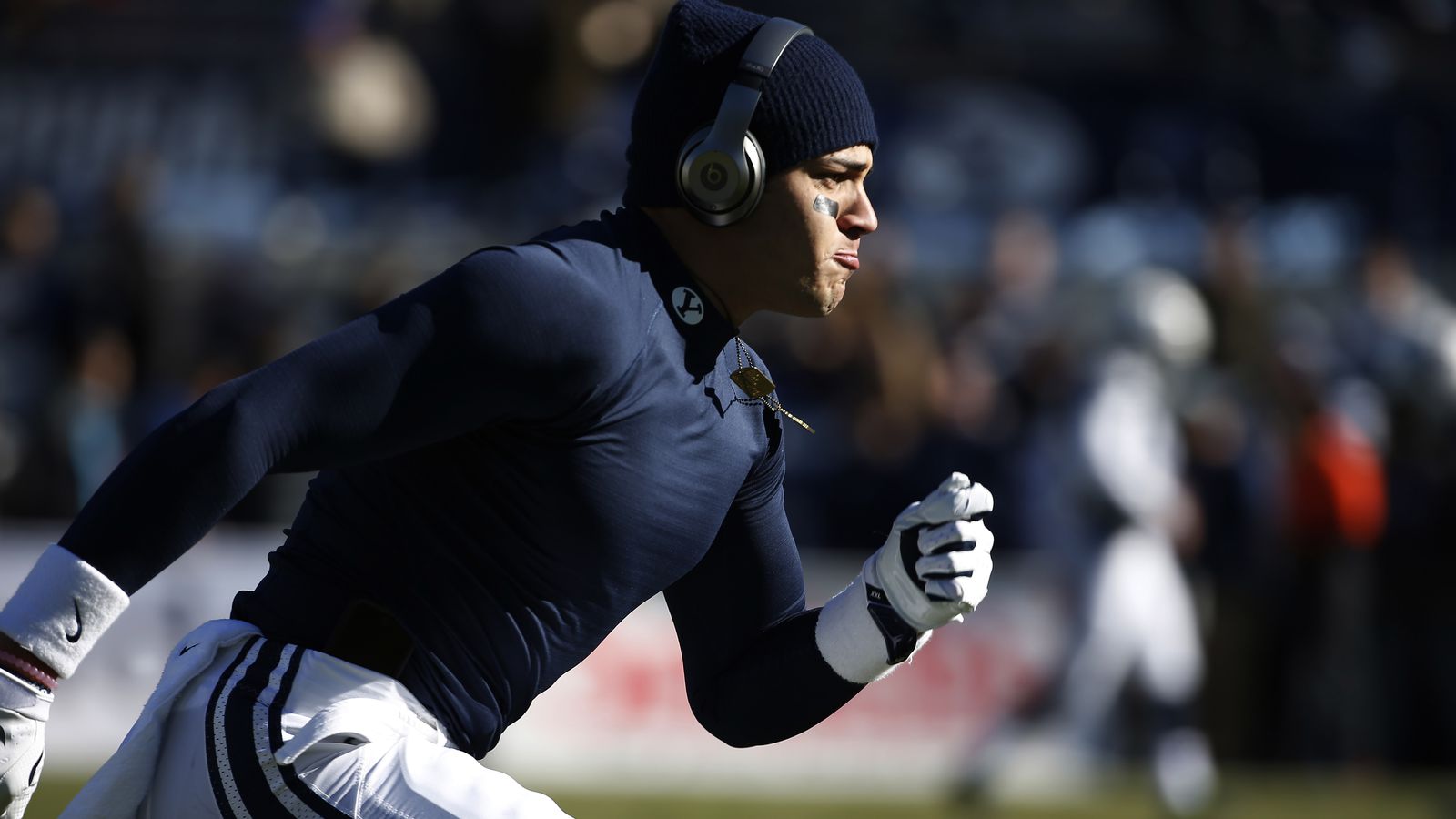 One of BYU’s best pass rushers will return next season

You are correct Dew. Takitaki will be coming back in the fall

Glenn,
Here is the explanation of why the coaches changed positions… It had nothing to do forcing Kaufusi out or anything of that nature. According to the article, it was done to help the LB’s and D-line to understand what to expect and see from the other unit. Help them understand and see what the D-line is doing better. Pretty smart if you ask me.

Floyd,I agree wit you on this one.

It has been over a decade since I have had so much of a complete confidence in all the decisions being made by our coaches.

Offensively, l love our play calling now. I use to scream at the play calling of the past decade.
Why, Why, Why before, instead of go, go, go now. I love the change.