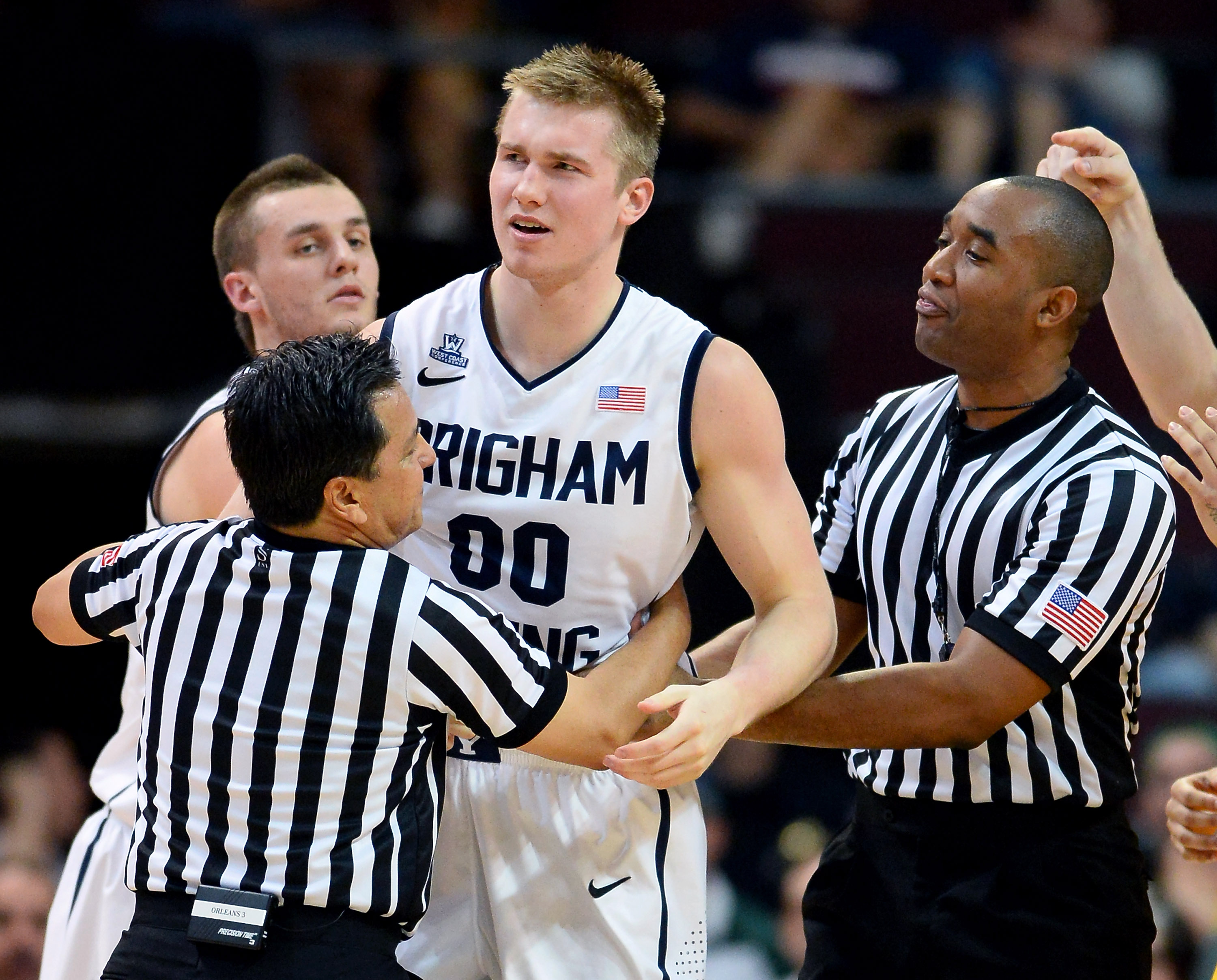 In two games this last week against Saint Mary’s and University of the Pacific, BYU basketball fans had plenty of complaints about officiating. So hereâ...

how can someone who considers themselves a journalist of some kind write such tripe?

He seems not to know that the refs are from a consortium of western conferences.
Hasn’t done his homework on most of the refs working WCC games.

This is not to excuse the poor quality on the last weekend. In fact just checking the background of the refs at the games reveal exactly what basic viewer level observations reveal: The refs were not up to the usual high standard. Their rankings and experience simply do not match what the normal WCC games, especially with the more important games, usually get.

Harold, don’t you know journalism is dead. They all share their biases and gang up on those they hate. Why should anything be different in sports?

Journalism is far from dead.
It is now more alive than ever.
The facade that existed for most of your life that journalists were unbiased observers and reporters is being shown for what it was a facade.

Now finally we are back to the original journalism. Biased reporting ripping apart the other side digging deep to show the fallacies and hypocracies of the other side.

None of which excuses getting basic facts correct before opining in public.

how can someone who considers themselves a journalist of some kind write such tripe?

May I enlighten you about this? Coming from a person who has officiated sports for over 30 years…

That is how it is done in almost every group of officiating, the best officials gets the best assignments.

One way to counter act that is to push your conference above the others by paying more for the officials.

I did not watch the game because of family commitments and Temple assignment. But if the officials were as bad as some of you are saying, my guess is that the officials assigned to the game are the lower skilled officials or pretty new ones.

Let me ask you a question: Say you are a computer programmer, you have really good skills… You are offered two jobs 1) from Microsoft who will pay you 500,000 a year 2) from a local programmer shop, where they are offering 95,000 a year. Which one would you pick?

That is why the best officials stay in the best conferences… they pay more, they treat their officials better (own dressing room, usually feed the officials, put them in better hotels,etc)…

Sanity and intelligence is dead according to your response. Journalism was established to not be biased. Get the information out and let the reader decided. That’s journalism. Once you introduce bias it becomes commentary. That’s from Journalism 101.

I know exactly what you mean. I coached in a small lower level league and we had to put up with the inexperienced lower paying referees like Jim Hawks

(Couldn’t resist. Now he will come back with how everyone loved his refereeing)

(Couldn’t resist. Now he will come back with how everyone loved his refereeing)

I will come back with truth.

You don’t know what you are talking about.

My first year officiating I did a freshman game between Thousand Oaks and Santa Clara, two programs that were light years ahead of St. Bonny at the time. T.O. is a big school and SC was a perennial CIF playoff team. So my partner for the game didn’t show up and the game had to start because we were on a schedule. I did the game by myself. The final score was like 103-98 and yes, it was 4 eight minute quarters. These kids knew how to play and they had endless energy.

After the game both coaches came up to me and asked me my name and then BOTH told me it was one of the best officiated games they had been a part of that season.

:So what were you saying again?

I coached in a small lower level league

I think that pretty much sums up your coaching career and the quality of basketball your team played. It is easy to officiate a game that has teams with quality players. The tough ones are the weaker teams with marginal players… and coaches that don’t know the rules or understand the game. It made sense that you were frustrated with me…

Obviously you just let them play. But, now who is narcissistic

I know how to “call” a basketball game. It isn’t just about fouls committed. It is about advantage and disadvantage among other things.

The best officials are the ones that don’t make themselves a part of the game. They set some boundaries and then let the players decide who wins the game. I was doing some varsity games in my second year. It usually takes 5 years before you get varsity games… that isn’t narcissistic, I’m just telling you what happened.

I certainly wasn’t close to the best officials but I was good enough and the coaches generally wanted me doing their games.

Can I ask where you find those rankings/data?

Journalism was established long before the US Constitution and was specifically biased.

Newspapers abounded in the US for well over a hundred years before the bastardization that said newspapers were supposed to be unbiased appeared.

The idea that journalists were unbiased largely came to be the idea only in the post WWII era. And thankfully finally it is almost dead.

That is why the best officials stay in the best conferences… they pay more, they treat their officials better (own dressing room, usually feed the officials, put them in better hotels,etc)…Does that help?

Sorry no it doesn’t.

The fact is that until the last game the history of the refs in the BYU games this year is that at least two of the three were experienced in multiple conferences and in multiple year-end tournaments mostly including the NCAA. They have been good quality.

The WCC just ran out of money? Not likely that they just happened to run out of money halfway through the conference season…possible I suppose.

They just decided to not pay as much for that particular game? possible I suppose.
Do the refs actually get a list that says the BYU-Pacific game gets paid less than any other BYU game this year?
Oh maybe for all the other games the refs just liked reffing the BYU games? and that particular night they decided to not like Provo? Do they really care? Maybe for some reason the flights into SLC or Provo were just different that Saturday than any other game day this season? Not likely…

The question is not the overall picture…the overall picture if you check who has actually been reffing the games is pretty good. Refs who regularly appear in the PAC12, and other “power” conferences regularly appear in BYU games. The question is why that one particular game had such horrible refs instead of the better quality that has been the rule.

It’s a crap shoot… Officials are assigned games according to their Availability and ranking.

I am not sure how you know the other officials were end of year tournaments or NCAA tournament officials. Most of the time, you do not know who they are until game time and unless you track their games… you would have no way of knowing.

Most conferences rate their officials after every game, the conference head of officials reviews the games (staff does this) and reads the reports that the coaches submit.

No, the conference did not run out of money, at the beginning of the season they negotiated with officials group for a set fee. I believe (I could be wrong) that the PAC-12 pays their officials $1600-2000 a game, while lower one like WCC is around 450-1200. THAT is a big difference.

I know a lot of officials that do the PAC-12, because most of them also do baseball. I am not saying all of them are this way, but the ones I know, they are good officials who really does not care who wins or loses, all they care about is calling the game consistently.

Like I said, a lot of times it simply the luck of the draw, if a good official is available, he can choose to do a WCC game with lower pay, because the real reason the official is doing this in the first place is because they love doing it.

The you have to consider the human elements… coaches makes mistakes, players makes mistakes and YES even officials have off days where they are not performing to the level of the skills. It happens, you never had a bad day at work?

I am not excusing the officiating, one thing I always taught the inexperienced officials is that if you are fair, and hustle and above all consistent, it will cover a multitude of sins.

Contrary to what some may think, I have also seen where officials because of personal bias towards teams/coaches/players, costs teams wins. It disgusts me to no end. But it is hard to prove it.

Coach Rose does have some power in this, after each game he can write his views on the officiating and submit it to the Conference, I know Coach Arnold many years ago black balled an official for ever doing BYU games because of the way he officiate one of the Cougars games. It does not happen very often, but it does happen.

I am not sure how you know the other officials were end of year tournaments or NCAA tournament officials.

There is more than one web site behind pay-walls that track basketball officials.

The information on the per game pay is interesting. I’ve heard it before and have looked for a source. My impression was that the PAC12, MWC, WCC origins of the officials consortium had done away with the pay differential. I’ve been wrong before of course.

Admittedly some of the refs who do western games also cover Midwestern and even occasionally eastern games…
Putting the information you provided with the actual teams covering the games it looks like the WCC pays less than the MWC as well as the PAC12…hmm.

I didn’t check other weekends for other WCC games.
But this is the first weekend where I would say that the BYU WCC games had lesser quality refs…
Leaves me puzzled still.
Why this weekend would the BYU games, and apparently half the WCC games, have lesser quality refs than usual?

I remember that time period. We were really low on officials. The money wasn’t very good and the abuse was pretty bad. So, lots of officials quit. I had several games with 1 official. And, those ended up being the best games. No ticky tack fouls and the red worked harder. When a 2nd official would show up the officials didn’t work as hard.

I would like to see a link to these websites, I would be interested in seeing how they “Evaluate” the officials.

The schools started teaching unbiased journalism in the post-WWII era only.
Before that the ridiculous assumption that it was possible to be unbiased was not even entertained.

If you really care about the question, it is not that difficult to find a history of journalism in the US…Even a good college freshman survey of US history covers some of the basics of the history of US journalism.

All news is commentary. The only questions remaining are whether the journalist tries to be fair with the other side, or whether they cover the basic facts.

The author of the article that started this thread didn’t even bother to do basic homework.

I used to go to statsheet
apparently recently bought out https://automatedinsights.com/statsheet?1=?1=