What about Steve Beo?

At 6’3, Beo is a pure shooting guard. He is not going to play any part in the assist game. Imagine a shorter Tyler Haws. He owns the Richland record for scoring @49 points as a Junior. 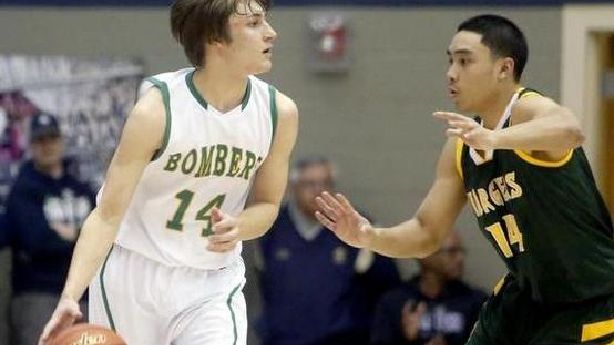 In 2016, Beo averaged 27 points, seven rebounds and three assists for the 25-9 Bombers. In the regional loser-out game against Central Valley, Beo poured in 48 points.

Beo is well acquainted with BYU’s current and future players; of the crop of Lone Peak High School products slated to join or re-join the program (Nick Emery, TJ Haws, Eric Mika), Beo says “I’m actually really excited to play with all of them; I have watched them play on TV and thought they were really good.”

Second guy to comment on playing with the Lone Peak boys.

Just curious why you say he is not going to play any part in the assist game?
With shorter games and a slower offense in his high school games, it seems to me his assist game looks like a strength of his game.

Three assists a game on this year’s cougar team would have been second to KC wouldn’t it?

Great competition means no one has a guaranteed spot. This could be a great year!

was Fischer an assist guy? Fischer as well as Davis have passed the ball a time or two and they were always a turnover.

Some guys pass the ball, some never. Just me on Beo. He looks for his shot first. passes last. Just my observation.

I don’t think BYU needs any more selfish players who look to score first, and help the team win second.

I mean after all, if the Lone Peak boys are going to win a wcc title, they need to play team first basketball don’t they?

This could be a great year!

Woulda, coulda, shoulda… and wait until next year! Never heard that one before… LOL!

Sounds like that’s what the players are wanting to do. Beo said he’s playing because those players want to win and he’s a team player. This is going to be a great year!

Beo said he’s playing because those players want to win and he’s a team player.

Actually this is what he said - “I’m actually really excited to play with all of them; I have watched them play on TV and thought they were really good.”

Didn’t see anything about him being a “team player”, but that’s what you thought about Fischer and the last shot of the season attempted by a BYU player was his blocked attempt to beat Valpo… kind of ironic how it ended. I just hope the new guys don’t watch any replays of this past seasons team playstyle.

So, you didn’t listen and watch him on Sports Nation last week? Ignorance is no excuse

It would really be awesome if just one time, just once that all of the hype and expectations actually happened like everyone here seems to claim it will.

I don’t think anybody ever hyped the football team from 1984 and I’m not sure the basketball team that made a showing at the sweet 16 was hyped all that much. The problem is that BYU almost never lives up to expectations. I will be surprised if the volleyball team wins the national championship. They absolutely should and have to be the favorites coming up but we will see if it happens.

what day did they have him on?

I thought I’d seen all the basketball end of the season interviews they did on youtube but can’t find one with Beo.

Though it does sound more like you were paraphrasing Childs than anything else I heard.

grasshopper uses whatever means necessary to accomplish his purposes.

So, what is the issue? Is it a Mormon thing?

What issue are you talking about?

Not being able to win it all when we should? Skip the cloudy stuff. What is it about BYU

Are you talking about the volleyball team? They have won a national championship and should be able to do it again this season and possibly for a couple of seasons after. They start 5 sophomores…

Volleyball is a different sport than football and basketball. It doesn’t have near the national exposure or popularity. Also, the officiating isn’t nearly as objective… there are no situations where an official can make a call and get away with it if it is a bad call. However, those are more minor obstacles.

The biggest obstacle is that BYU too often gets caught up in the head game, deer in the headlights problem. They lose mental focus and I’m not sure of the reason for that. They have been the best volleyball team before and not won the national championship.

Does that answer your question?

JH:The biggest obstacle is that BYU too often gets caught up in the head game, deer in the headlights problem. They lose mental focus and I’m not sure of the reason for that.

SG: Probably because of wiggly fingers and constant thoughts of who to marry

Now you have all of these athlete power couples marrying each other and creating superkids so they can start being recruited in kindergarten. Ten years from now the Collinsworth and Mangum kids are going to be getting letters from BYU…

It is kind of creepy…

This guy reminds me of the St. Marys players…terrific shooters but not great athletes. He could probably thrive in the right system. He could be a smaller version of Zach Seljaas.

Been going on for decades. Athletes marrying athletes. Where have you been?