Notice how I’m moving on, Lohner/George are now an afterthought.

Joe Wheat, whoever he is, makes a good point,
“Let’s start with why the news was concerning. It’s not because BYU is losing two irreplaceable stars. I love Lohner and George as much as anyone. They both have NBA level size and athleticism, but the production simply hasn’t been there. George and Lohner averaged a combined 15/11/2 on 43% shooting, 30% from three, and 62% from the line. Like it or not, a team built around that kind of production is not going to cut it in the WCC let alone the BIG XII. The issue, then, is not who is transferring, but why.”

Erickson was never in the convo and Baxter was always hurt.

If you want to get down to brass tacks, BYU did not make the Dance (when they were guaranteed all season long until that 4 game losing streak in the WCC). Think about it, we were a lock for 2/3s of the season. then nobody helped Barcello score, the two biggest minute eaters were Goerge/Lohner. Would I take them back…in a heartbeat but those two are a big part of why we did not dance, movin on.

BYU has to replace Barcello. His shooting and defense although his D was lacking this season partly due to double teams just wearing him out.
Some transfer will come to our rescue, namely a guy like
Antoine Davis, One of College Hoops Top Leading Scorers, to Visit BYU - Vanquish The Foe
or
BYU Makes Top 8 For Coastal Carolina Transfer Point Guard Rudi Williams - Vanquish The Foe

not hearing anything more on Sean East, he signed with Missoui
but recently returned missionary, Dalin Hall is going to get minutes this year, lots! mark it down
Dallin Hall Fremont & AAU Basketball Highlights Summer/Fall 2019 - YouTube

Lets say we have the Point taken care of
Who scores?
Foos had a historic Fr campaign. He can get 20/10
That is about it, others can get 10 points on a good night but Pope needs scoring

The other 2 RM Fr. of Toolson and Saunders are scoring machines, but so was Erickson so we will see.

Starters next month
Foos
Johnson
Knight
transters fill out the 1 and 5.

What worries me is that Pope is hitting the “transfer portal” heavily to plug holes. It’s a “by the sword” thing, and I (as a grumpy old codger) never liked it.

I like what Dabo Swinney says about it (Clemson doesn’t use it). In a nutshell, what message does it send to your traditional recruits if you upend things all the time with portal transfers?

I also think it adds to the “mercenary” sense of everything in our institutions. I would recruit people who want to go there, and intend on staying the whole time and not leaving early. If this means there is a “talent deficit,” so be it, but at least I would be rooting for athletes whose hearts are in it. 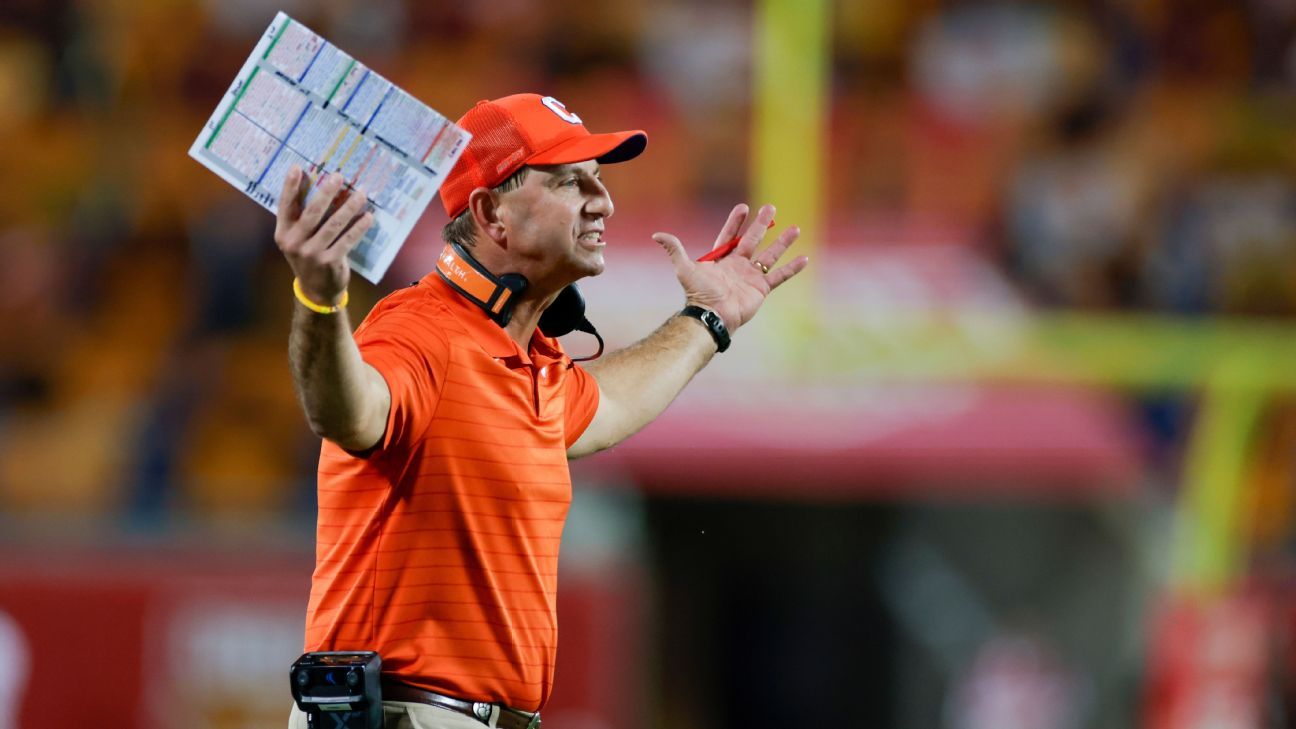 Clemson coach Dabo Swinney talks about why college football needs a "complete blowup," why he thinks Nick Saban is underpaid and more.

I liked it better when our Olympians were amateurs, even though we were playing against Communist professionals. We often won, anyway.

I’m with you! No thing as “True to your school” anymore. As I mentioned before that the NCAA could curtail this some by pointing specifically to scholarship players that they have to sit out a year transferring before graduation. And, they cannot transfer to a school in the same league or state. I would also make them sit out a year for following a coach to another team.

I am all for the transfer portal. It will calm down over the next 2 years. College students can move and will from colleges of their choice. Coaches and administrators do to. Athletes should have the same ability. If you are a good coach you will find and teach the recruits and build loyalty. If you are not a good coach, you will struggle. The NFL has free agency and draft picks and the portal is the same thing for college athletes. L&G were simply not that good of players. Neither is Knelll or Johnson. We need massive upgrades and more continuity to compete with B12. The only player I wish we would have kept was Baxter. But he is injury prone. So this coming season will be the big test for Pope and the portal.

BYU will need massive upgrades to compete in the B12 but with a Honor code, BYU’s only strategy should be to get the best LDS athletes and have good teams every 3 years or so.

The fact that BYU fielded 5 non LDS kids on the same time this year was historical in many ways. It means that Pope has a wide recruiting net but it also says to me that we are not breeding loyalty into the program.

Jay Wright, Villanova, just sent a SHOCK WAVE throughout college basketball. Loved by many, the BEST 10 record coach in CBasketball. sited burnout. I see very bumpy times for coaches until we get past the covid years and the ability to transfer at any time without restrictions.

Here’s some good news if the player signs. In other news, Gideon George has withdrawn from the transfer portal: 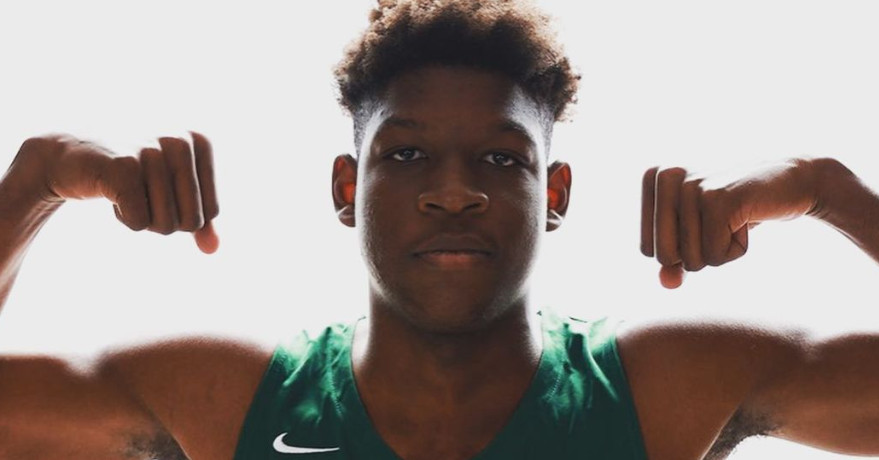 BYU is getting a big-time recruit on campus.

Good news if George stays. Lohner should stay as well. He was just starting to hit the outside and could play a lot of the 3. Do you think Lohner’s decision plays a part of George’s decision? Lohner would take up George’s minutes at the 3.

Sorry, but the College athlete is not a pro and needs to learn humility like the 60’s and 70’s players did. They are too young to be acting like 30-50 year olds. Their brains haven’t full developed until age 25. If colleges are paying for scholarships, then colleges should have some control over this movement from college to college. Sit out one year or lose a year if on scholarship.

Here’s some good news if the player signs. In other news, Gideon George has withdrawn from the transfer portal:

wheeewwww, heeees back. just like that, George need BYU, we need him.

As for King, don’t count on it, Craighton is a very good Big East team with a great coach.

George is the starter at the 3.

Chris,
I am going say something that will probably make some pro Pope fans upset.

Not every player who comes to BYU can play “Pope’s way”, they simply do not have the skills to do it, Does not mean Pope is a bad coach or the player is not a good player he simply does not fit the bill

Could Lohner be the that type of player? Look at the kid that Transferred to UVU (Harding) he did a lot better there than under Pope.

It reminds of Pro players who struggled on their teams and was traded to the Jazz, then Sloan got a hold of them and they went bonkers. two of the ones I remember best is Shannon Anderson and Bryon Russells. Both players played exceptional well and when they went to other teams they flopped.

I believe Phil Jackson did the same thing both at Chicago and LA.

I will also add this, most college players do well their freshman year, then have a sophomore slump (or jinks if you prefer). To say Lohner was not as good as the year because he should have been better is inaccurate. Jimmer himself had a sophomore slump.

I heard a guy on Nevada Sports radio explain how the transfer portal is killing college basketball. He made some good points because now if a coach disciplines the players he simply transfers.

Could Lohner be the that type of player? Look at the kid that Transferred to UVU (Harding) he did a lot better there than under Pope.

OK, I will bite.
Harding saw Bacello and our point guard and knew his starting days were over so he transferred to UVU where he could start.
Lohner went 1 for 19 from 3land to start this season. That has nothing to do with Pope’s system. Lohner can sit there and hit 3 after 3 in practice, 8 out of 10, easy but in a real game, his head gets in the way. When BYU played sub teams with poor talent, Lohner just goes to work. In big games with great talent, like Gonzaga, Lohner disappears. Mental

I heard a guy on Nevada Sports radio explain how the transfer portal is killing college basketball. He made some good points because now if a coach disciplines the players he simply transfers.

George is doing the right thing to stick around at BYU basketball program.

Maybe he saw he’d have to compete with Lohner and didn’t think he could. Just a thought.

Atiki is limited and will never turn into a good player. I think Pope will get a big from the portal so Foos will get back to his power forward job!

We don’t know Atiki’s upside yet. He’s just learning. We do need a couple of big men. Maybe 3 of them.

OK, I will bite.
Harding saw Bacello and our point guard and knew his starting days were over so he transferred to UVU where he could start.

I think this will become more and more of a trend with this portal stuff. It like the player from Alabama who Saban disciplined who simply transferred instead of taking the heat.

But the point is that Harding did Transfer, and he did play better.

One Note Chris: I know for a fact that the best players do not always play on a college team. that coach plays their favorites instead of the better player (I am not saying that this is the case here).

I can mention the Football players under Mendenhall who were better but did not play until his favorite was gone Kyle Van Noy was one. I also know for a fact that Coach Weber started lineman over better qualified lineman (Firsthand knowledge).

First hand complainers for sure. There are some that can’t handle being second and blame others.
I had players on my teams over a ten year coaching period that were more talented than those I started. Talent is important but not a reason to start someone. Especially when they don’t work hard in practice and not serious enough to learn the offense and defense. I saw nothing from Erickson when he played. He looked lost half the time.