It seems to me that everything Krysco or Hill or now the UofU Prez says makes them look worse, and even more pathetic. I am shocked that Krysco is not backing off of the “serious injury risk” rhetoric. It really is moronic to say that in public. I am turning 50 and have seen and read recaps of thousands and thousands of college basketball games, and I’m pretty sure that other than the Kermit Washington/Rudy T incident I have NEVER seen or even heard of A SINGLE “serious” injury caused by intentional player-on-player contact-UNTIL last week when I read of Krysco himself breaking a guy’s nose. How ironic is that? This makes him look like a pathetic, angry, bitter hypocrite and I think the whole thing has devolved into a big joke now. Am I being too cynical, or do I see what the sporting world at large sees?

The Utards have embarrassed themselves. That’s about one can say. I think teams should not contract with them. They break their contracts.

It is a good way to make money w/o working for it!

Krysco, Hill and the U of U president are trying to end the BYU -Utah basketball series and probably football too.
Why doesn’t BYU stand up for itself and cancel all Utah games in all sports. We don’t need this charade to continue.

I read an article somewhere this last week–from a legitimate national source, although I can’t recall which–that suggested that under 20% of UofU students self-identify as “Active LDS,” and that it’s even less for faculty, and that something like 60% self-identified as “opposed” to the LDS church. His point was that the days of UofU wanting to cooperate with BYU because of common LDS ties are over; the U is not full of Mormons who want to cooperate with the Church’s University, rather full of people who don’t like the LDS church and resent BYU as a symbol of the church. PS the author was not LDS. So the point is that IF the author’s research is accurate, anti-Mormon and anti-BYU UofUtah would be less inclined to have any partnerships with BYU than hundreds of other “LDS neutral schools.” 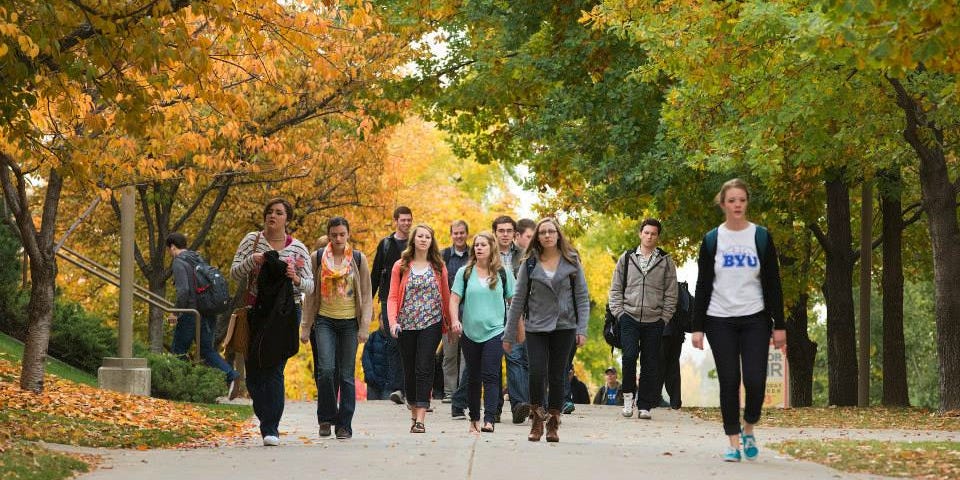 The 25 safest college campuses in America

Schools with high health and safety scores and low crime, among other factors, were ranked safest by Niche.

I have been following closely the hoopla surrounding the reaction and fallout from the Emery punch of the Utah guard (Brandon Taylor) a few weeks ago. Along with the rest of the sports sports fans who love the BYU-UTAH rivalry, I have scratched my head time and again in an attempt to understand why the Utah coach and his AD would react so strongly to a player throwing a punch. The Emery punch looked bad and was wrong but it didn’t cause great bodily harm. Brandon Taylor was up and smiling as Emery got ejected and then went on to play as if nothing happened. No black eye, no bruise, no blood, no stitches, no playing time lost, no big deal. We heard that there wasn’t a sufficient apology from BYU and Emery in particular. Yet, when you read the public apology of Emery and realize that Rose personally apologized to Krystkowiak after the game, you wonder what more he was expecting. I think today’s article in the Deseret News cleared things up and got to the real root of the whole issue.

Krystkowiak talks about his reasons for canceling the game, including how it sometimes even brings the worst of him.
“There’s part of this where I’m actually protecting myself from myself and I don’t know exactly how I’d come across with our players in the week leading up to the BYU game with maybe a little toxin and the venom that I have inside of me. It puts me in a little quandary,”
Anyone who saw the Krystkowiak reaction to the Emery incident could see that his temper got the best of him. He was going after Emery before his assistants and some of his players restrained him. Had they not stopped him, he would have escalated the situation and who knows how things would have turned out.

In his open letter to Krystkowiak, Mark Durrant wrote the following about what he witnessed at the scene:
“I have yet to hear an apology from you for your actions following the incident. I was there Coach, less than twenty feet away from you. I heard everything you said. I saw you needing to be restrained from going after a player on an opposing team. I saw you taunt and berate him. If a TV camera would have caught your actions and a microphone picked up your words, we would not be talking about Nick Emery. I have seen many “hard block outs” and elbows and even punches in the rivalry, but I have never ever seen a Coach act like that towards the opposing team’s players. For the first time today, you admitted that you were somewhat foolish in your actions. I’m glad to hear you acknowledge that. But, after witnessing the events of that night, I don’t believe you are as concerned about the safety of your players as you are concerned about your ability to control yourself in a similar situation in the future. But, whatever the reason, it is not about Nick Emery’s actions, it is about you and Chris Hill. “

In my opinion, this is the real reason for the cancellation of the series. It’s about Krystkowiak’s concern about him losing his composure in the heat of an intense rivalry. It’s about him being embarrassed that his own players had to restrain him. It’s about him “protecting himself from himself.” He would rather cancel the rivalry series than face the possibility of losing his temper and composure again. If we play again and he sees a hard foul or some chippy remarks, his temper might just get the best of him. I believe that is what is at the heart of this whole issue. It has nothing to do with player safety. We all know the real risk to players’ safety is injury due to playing the game (sprained ankles, torn ACL, back spasms, etc). Utah players have lost plenty of playing time this season due to these types of injuries. Has a Utah player ever lost a minute of playing time due to an injury caused by a BYU player? The disappointing thing in all of this was how Krystkowiak took the low road by blaming both Emery and the BYU program for the need to cancel the series. It’s becoming more clear what the real reasons are and it has nothing to do with player safety.

Then he should get out of coaching instead of hurting everyone else concerning the rivalry.

SG: Coach K has too big of an ego and lesser talent to get out of coaching basketball or to find a new vocation, except maybe being a colorless basketball media analyst.