Climate Change, is the world dying?

I said I would cover the myth of Climate Change=Dying world.

Last year I was in Kemmerer WY at Fossil Butte. If you go to the visitor center, they have a walk from the parking lot to the museum. Along the way, 500 million years-present is covered with signs that say, the type of life, biosome and CO2s (anything dead like leaves etc. store their CO2 content. 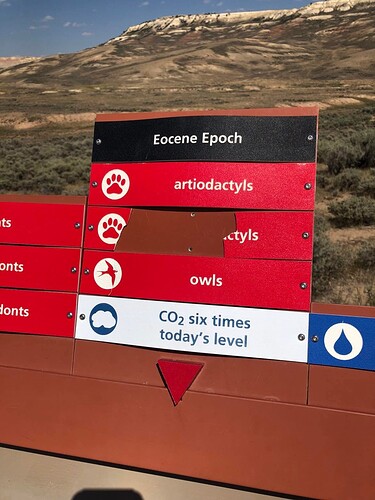 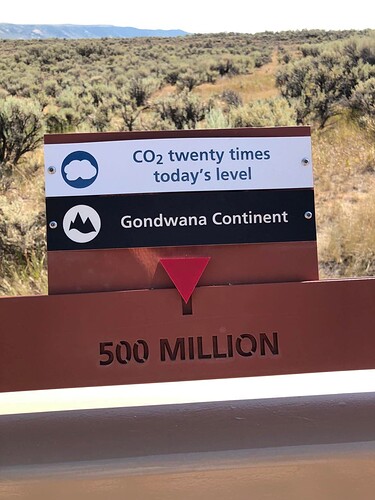 Did the planet die?

As a geologist, I have to say that our planet has had thousands of heat periods as well as ice ages. Climate change is very real. The planet has gotten so hot that pretty much everything has died or how about the die off of the dinosaurs, some 63 million years ago, brought on by dust after an asteroid impact. So much dust that the sun could not warm the planet and all died.

In sedimentary formations, 99% is composed of 3 types of sediment. Sandstone, Siltstone and Limestone. (there others but bear with me)

Siltstone represents mud that drops out after storms and runoff.(what Caly is going through today, massive flooding carries the mud out to sea and drops it.

Limestone reefs, formed in between the beach (sands) and deeper mud sediments. Reefs are 100% limestone, formed by animals (corrals, Bryozoa, mollusks etc, who build their homes out of CaCO3=Limestone.

In a raising ocean, the beach is now a mile or many miles inland and the reef built OVER the sandstone with siltstone over the Limestone. (are you bored yet?)

When the earth has too much CO2s , could be by fires, autos or even volcanoes, the ocean critters go into hyper mode of building reefs. We already have trillions of tons of Ca (calcium) and Water H2O. Add CO2 and presto, H2O +CO2+Ca= CaCO3 +O2 (air)… Congratulations, you just made limestone.
Limestone - Wikipedia

Woke scientists scream, “the reefs are dying”. Hardly!, Reefs are currently growing so fast that they are getting sun bleached along their tops in the wave zone, but they are expanding out their sides a brake neck speed.

Geologists for 100s of years studied the relationship of volcanics>increased CO2s >bigger limestone formations. It is no different if we get Carbon from car emissions, Fires, From Coal fires, or volcanos
Do volcanoes really emit more CO2 than humans? (zmescience.com)
Very interesting read and you should read the comments below the article, underwater volcanos constitute 90% more of the Carbon than surface volcanos and are NOT included in the article or human comp…

Summation
Will CO2s heat up the earth? Yes
Will we get wider droughts and flooding because of CO2s? Yes
Will the earth FIX the problem of Climate Change? yes, it always does.
Will the earth Die? Yes in a few billion years when our sun goes super nova.

That’s a good read. Helps my understanding.
Obviously and unfortunately you would be (are) deemed a heretical climate denier.
I would appreciate your thoughts as to why or what motivates 95% of climate scientists to take the opposite view. Gotta be the money. Or the “need” to be on the bandwagon. And flawed science.
Thank you Fish

That was very interesting and I’m sure much of it is scientific and fact based. I don’t know if it is 100% accurate or not but it is good enough for me to believe in general.

I would be interested in how you might link it to God’s plan of happiness for his spirit children. How does all of this apply to us from a gospel perspective?

Assuming that you subscribe to and believe the principles of the restored gospel of Jesus Christ.

What I am about to say may cause some to label me a rightwing extremist, but the fact is the climate change hysteria is driven by politics, and specifically by Marxist politiics. Marxism is a wholely materialist philosophy, and thus is driven by money which the average indoctrinated Marxist ideologue, not among the ruling class of Marxists, will vehemently deny. Right wing rhetoric or not, I strongly beleive it is the truth. If you can take away man’s freedom to own and control his own property you take away a huge portion of his liberty. Thomas Jefferson said men were endowed with the inalienable rights of life, liberty, and the pursuit of happiness. He adapted this from the great philosopher, John Locke, who said men had the rights of life, liberty, and property. You take away man’s right to his property and you restrict all of the other rights Jefferson enumerated.

One of the tenats of Marxism is the abolition of private property. If you can convince enough people to to give up property rights in the name of saviing the planet you can control them and rob them of essential liberties. If you can claim scientific consensus and then convince enough well meaning people of the morality of your cause you can create a cult like movement with all the trappings of a religion. Marxism itself is a false religion regardless of the fact that it is based on an economic philosophy. If you look at the climate change religionists they want to grossly restrict how we use our property to save the planet. For some “Mother Earth” becomes their god.

Ultimately we know, from the scriptures, the Earth will be cleansed by fire, purified, and celestialized. That’s my two cents. If I am a climate change denier so be it. Having said this I think we have to be thougthful stewards of the planet we reside on and not be wanton polluters and wasteful of resources, but it is a fools errand to shut down affordable energy and put it out of the reach of the average person thus restricting their freedom to enjoy the abundance the planet has to offer.

They’ll even take away your gas stove

Their ultimate goal is power and control the hearts of mankind to do evil to mankind including genocide and abortions on demand for comfort ability.
Did you hear that USC Medical put out a statement that all fast foods cause cirrhosis of the liver and should be outlawed. Instead the climate religious leaders say we must transition to eating delicious bugs.

I am fairly right of center, but I find nothing you said as being objectional, in fact, I agree with all you said. Especially “…the morality of your cause can create a cult like movement with all the trappings of a religion”. I believe if you had a check list of what defines a religious cult, this cause and essentially the whole far left indoctrination of the younger generation particularly would check most if not all the boxes.
Hopper’s cite regarding USC medical statement is - sadly - not surprising. Was USC as a Catholic school ever conservation?

As a former student at USC in the late 60s (convert while attending), I can answer your question. USC was not a catholic school. It was founded by (according to various sources), either the Methodist Church, the Methodist Episcopal Church or the Church of the Brethren. As a student I was told the latter, but current online sources mention the two former. In the 60s it was definately a conservative institution. During the Cambodia War Moratorium, UCLA and most of the other colleges in LA shut down. USC and Pepperdine did not. Protestors came on campus, lay down on the ground and tried to block the students from the classroom buildings but most of the students just stepped on fingers and toes as necessary to get to class. Jerry Rubin tried to start a major protest among the student body and only got a couple of hundred takers, though watching the rally was entertaining! UCLA was the Democrat school and USC was the Republican school in those days

UCLA had a high number of Jewish students like my brother. I used to go down and stay on some weekends with him in 1971-72. We marched over to the government center one weekend in 1972 after the war in Israel and Egypt. The school was actually pretty conservative than it looks today.
I’m sure USC was Methodist but severed ties. I have friends who went to USC and it had and has a lot of Catholics that go there.

Severed all religious ties in 1952

Aro, once again, has hit the nail on the head. Your insight and perspective are spot on. I am saddened watching it all unfold but it is what has been prophesied and will certainly continue.

No matter, it is all part of preparing the earth for the second coming of Jesus Christ. We will be vilified and persecuted for believing such innocuous things but that is also part of the future of this earthly experience.

As any dedicated USC fan and alum would say… “Fight On”. I love their song.

Thanks all for the USC context. Very interesting. It sure has embraced the left now.

No matter, it is all part of preparing the earth for the second coming of Jesus Christ.

I was in a inner city mission meeting and one of the leaders was talking about a meeting they had with one of the Apostles (sorry can’t remember who it was). The comment came up that “we are in troubling times” with all the negative politics, wars, and many divisions.

The apostle agree with the comment, then someone asked the question “is it going to get better?”

Pretty much backs up your comment in my mind.

I would be interested in how you might link it to God’s plan of happiness for his spirit children. How does all of this apply to us from a gospel perspective?

I don’t.
Anymore then try to understand War and the gospel. The two don’t mix.

They don’t? There was even a war in heaven and Lucifer and his followers had to be ushered out to preserve agency. Freedom is worth fighting for. As an example, for years the world turned a blind eye to Hitler, Stalin and Mao. 100 million deaths later. It isn’t war that is the problem. It’s Satan.