Where did I say you were evil? You are as bad as Romney and Schiff making up things.
Back to Romney’s sham testimony. He made the whole thing about himself instead of the people and state he’s supposed to be representing. He gave the Church another black eye for saying only he has a conduit to God and only his conscience is important. He wore his religion on his sleeve.
Why did he do this? It’s in his posts in that sham twitter account. His hatred towards Trump. He wanted to get back at Trump so he moves to Utah where blind members would vote him in. He knew the House would impeach when taken over by the hatefilled Democrats exhibited by Pelosi. Mitt knew he’d be able to try to embarrass Trump and get back at him.
None of what he did had anything about sharing the Gospel. None. So, we aren’t buying that from you.

But according to Scott I am evil because I don’t share the “conservative” viewpoint.

And you should always consider the source. I had to make a choice when it came to Scott very early and that was to either leave this site or disregard his firebombing and NEVER respond even when he does make an intelligent post. And it goes something like this:

I value friendship very much, have a solid core of friends that I trust, they pick me up when I’m faced with problems. They would drop everything if I asked. I have had 2 narcist friends that I tried in vain to accommodate, I’m talking years. There was always a fire brewing. Everything around them, their spouses, their kids, the community, always chaos, drama and in the end, it is all about them. So they are either friends at a distance, or enemies as they see it.

So Floyd, if I respond to you or any other on this site, it IS because I respect you, your opinion and that is that.

Romney…if I were to ever run for office, I would listen to the voters who elected me and be responsible to them. Ask yourself a simple question here with that in mind: Does the state of Utah want Trump impeached or do they see impeachment as another sham to discredit Trump?

Doesn’t matter what you are I think about Romney. What does matter is if truly bad people want to line their pockets with power and money off the backs of hard working people…and when someone comes along (Trump) that can “clear the swamp”, draw attention to their disingenuous doings (Bidens, Clintons) then we have to back them up.

Romney went against the will of the people he represents and that is that.
Voters will decide in Nov. if Trump was impeached, not A$$hole corrupt politicians (as in Schumer, Schiff, Pelosi)

I watched Romney take on vaping, he got a lot of national support, I applaud that. Now what happens because of his sanctimonious vote to impeach? Nobody will work with him, he screwed his constitutes, his influence for any party is gone, vanished, poof. Romney who once was the people’s choice, has been excommunicated. His future is done. And for what??? Vindictiveness.

I never said Floyd was Evil. You are a rumormonger for spreading that.

On something related to what I said earlier that Trump should have gotten rid of all Obama holdovers and he is finally starting to do it… I read somewhere today that Obama pretty much cleaned house when he took office. Trump should have done it. Obama was smart in that respect. Trump is finally starting “to drain the swamp”. He fired Vindman & Sondland a few days ago, and reportedly 70 other insiders today. It is long overdue.

Trump had some idea that he could work with Democrats and they would respect him. Didn’t turn out that way. Like you said he should have cleaned house

Part of the problem is that there are so many upper and mid-level officials of many federal departments that were anti-Trump and would do almost anything to thwart him and his policies. Glad to hear that he is removing more than just the top brass.

Also glad to hear that the DOJ is going after sanctuary cities / states.

Also glad to hear that the DOJ is going after sanctuary cities / states.

Sue em in court, make sanctuary states and Cities prove to the rest of us in court that it is right to harbor illegals. Give the news cycles a reason to take their daily Trump hate and focus instead on why Illegals can stay in our country at our cost and get benefits that we have to work for and pay for.
(Floyd, don’t get me wrong, I grew up in farming communities, I used to run dry farms in Idaho and had crews of Mexicans, ate with them, helped send money to their families in mexico but I draw a big distinction between hard working illegals, we could not run our farms without them, and sanctuary cities that harbor thugs, gangs and drugs).

And Dems wonder how a narcist president can get re-elected?

I read yesterday that the Oscars was the lowest watched EVER. Why don’t they love us anymore? Boo Hoo. Why don’t they bow at our feet and tell us how much they adore us?

Sue em in court, make sanctuary states and Cities prove to the rest of us in court that it is right to harbor illegals.

You do know a lot of those cities in the West fall under the 9th Circuit Court which is famous for it’s liberal rulings, right?

If you read and you dig, you can learn something new every day. Thanks Reed

A federal judge on Monday indefinitely postponed the sentencing date for President Trump’s former National Security Adviser, Michael Flynn, on charges of lying to the FBI in the Russia investigation.

Trump has changed the makeup of that court and others. If he’s re-elected and Republicans other than Romney hold the Senate, all federal courts of appeal will be conservative and uphold the Constitution.

I agree wholeheartedly. My dad was a laborer who dragged us all across the country looking for work. I played with black, brown and red kids my entire childhood (Texas, Arizona, California and elsewhere in the south) and am sensitive to their problems and concerns. However, our hardworking and tax-paying citizens should not be burdened by illegal aliens. The problems of farmworkers could be resolved if BOTH sides would in good faith employ reasonable and rational problem-solving methods.

Democrats hope they will become voters for them.

Chris,
I thought this article was interesting: 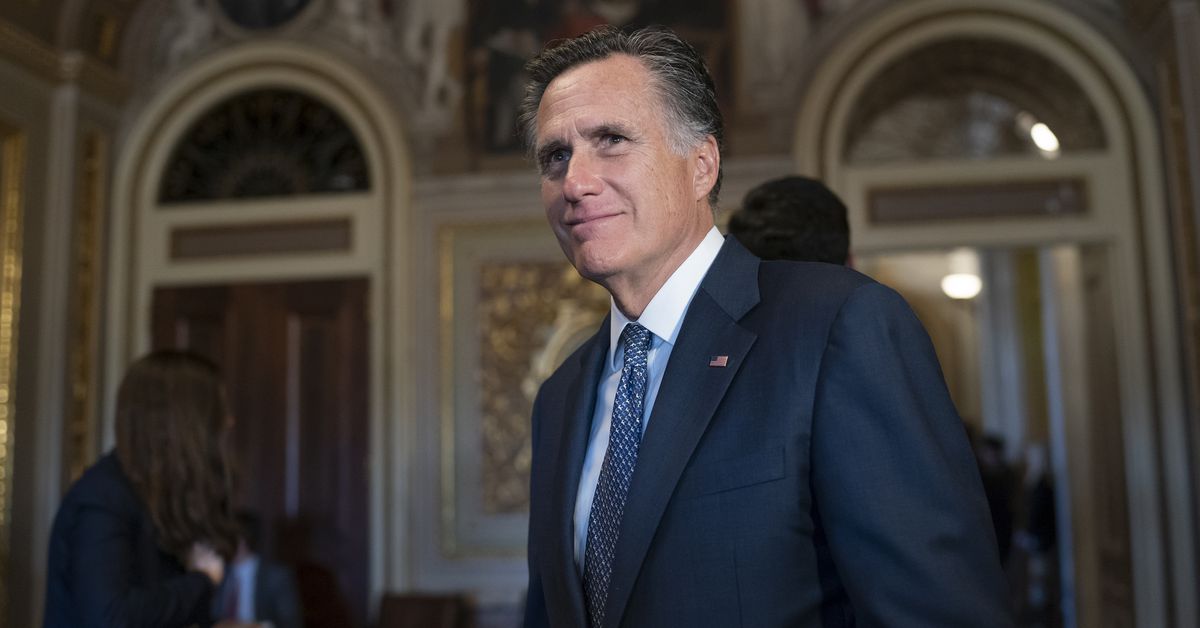 New poll shows most Utahns pleased with Mitt Romney’s vote, but 60% of GOP...

A new Deseret News/Hinckley Institute of Politics poll with KSL showing Utahns are both disappointed and proud to have Mitt Romney as their senator in light of his vote to convict President Donald Trump in the Senate impeachment trial.

According to this poll, for the most part, the independents and democrats were okay with Mitt’s decision as well as 40% percent of the registered Republicans, it was the hardcore Republicans who didn’t like what Romney did.

I guess Utah is not a “republican” as some people think… Which in my opinion is a good thing.

Yes, we need more people who agree with socialism, Marxism and fascism. That’s a good thing

What is more obvious is that progressives over the past 50 years have taken over the hearts and minds within our colleges, universities and now our public high schools and below. People simply don’t know what is in the Constitution nor do they want to follow it. Due process includes the right of the accused to face their accusers and cross examine them. That did not happen in the impeachment trial in the House of Democrats. Therefore, there should have been no impeachment. The Republicans in the House understood this. It was then up to the Senate to have oversite on the House and rebuke their mob rule attempt to diminish the Constitution. The Democrats were attempting to take greater authority over the Executive and Judicial branches of Government. To make it easy for the party in power to remove a President they don’t like. Paralyzing the decisions a President makes and call it abuse of power. Abuse of power or obstruction of Congress can never be a Constitutional reason for impeachment and removal. Neither are high crimes or what was then understood as misdemeanors. Treason or bribery in certain conditions are the high crimes written in the Constitution. Anarchy is what Romney voted for.

the impeachment trial in the House

Constitutionally speaking the trial is in the Senate. Article I, Section 3, Clause 6:

The Senate shall have the sole Power to try all Impeachments. When sitting for that Purpose, they shall be on Oath or Affirmation. When the President of the United States is tried, the Chief Justice shall preside: And no Person shall be convicted without the Concurrence of two-thirds of the Members present.

According to this poll, for the most part, the independents and democrats were okay with Mitt’s decision as well as 40% percent of the registered Republicans, it was the hardcore Republicans who didn’t like what Romney did.

yeah, I saw that. We will see what becomes of Romney, the rouge
https://www.washingtonexaminer.com/washington-secrets/threat-to-romney-in-senate-not-trump-his-proposals-will-be-killed
but what it took me to was analytics.
https://www.deseret.com/sports/2020/2/12/21133368/byu-basketball-mark-pope-ken-pomeroy-cody-fueger-tj-haws-nathan-bubes-keegan-brown-lds-mormon

Something near an dear to my heart.

They can’t try the impeachment without both sides being able to bring witnesses and cross examine. That is done in the House. The Senate is to take all that information and make their decision if the House has enough evidence and was their information from the defendant. There wasn’t. It’s not the job of the Senate to do the House’s job. This isn’t a courtroom trial. Can’t think that way.

Great observation of the Demo. party. To me they are also Anti-American.