Fish or anyone else

Do you know the story behind why Brayden Cosper (Bingham High) was not on the team last year?
They list him as a Freshman this year, but I am pretty sure he came to BYU last year.

This kid can flat out catch the ball, he is one the reasons that Bingham High School took the 6A State Championship two years in row. Did several of his games during high school. Nice kid to boot.

Great hands and can create his own space, much like Austin Collie did back in the day.

Hopefully he will emerge this year as a go to receiver.

Well, as long as he’s quick with great moves like Collie was. Do you know anything about his 40yds or cuts?

"Do you know the story behind why Brayden Cosper (Bingham High) was not on the team last year? “They list him as a Freshman this year”,

I really don’t know Brayden Cosper of Brigham High, in South Jordon, Utah, but I found some information about him on line.

He is a two sport athlete (BASKETBALL AND FOOTBALL) He did well in both sports at Brigham High.

IN ADDITION TO BYU, HE HAD OFFERS FROM AIR FORCE, NAVY,
NEVADA, AND WEBER STATE. HE HAD A TOTAL OF 5 OFFERS.

Good luck to your friend and all of us that love
our BYU Cougars.

I found out some more information for you regarding Brayden Cosper, from Brigham High.

Not the experience of Emery plus a knee injury. He won’t take up any slack this year.

Do you know the story behind why Brayden Cosper (Bingham High) was not on the team last year?

Injured on the scout team last year, season ending so he used a red shirt year. He is healthy and ready to go from what I hear.

Thanks… I really like the kid in High School. Had such great hands and could catch most anything thrown his ways.

I think if given a chance, he could be an impact player this year.

No D-1 experience, injured and he will be an impact player?

???
Sometimes Scott, you are as dumb as a rock, oh wait, you simply like to argue, especially if I post something.

You do realize that BYU will often redshirt a freshman who go injuried in practice right?
Moroni Laulu-Pututau comes to mind. There are others who came back and became impact players.

But you would never admit it, because your course of action is always take the contrary point of view.

At BYU, impact players are seasoned veterans. This isn’t Alabama or Clemson. Sometimes I think you wear the Blue Goggles too much.

Ugh… Bushman was an impact freshman as was Mangum as was Zach Wilson. Jamal William and Taysom were considered impact players … the list of freshman who impacted the program is longer than that. But that is all
We need to show once again that Hopper isn’t very knowledgeable about sports!

And where did we end up ranked? What was our huge winning percentage? Oh, impact at BYU :-/~

You were talking about impact players at BYU. Sometimes I think you can’t be so mentally challenged but then you surprise me every time.

Was this a discussion about freshman impact players or BYU’s winning percentage and/or ranking?

Grasshopper can ruin a discussion quickly…

No discussion ruined. Just judgmental people unable to handle questions is all.

Yep, Judgmental people, something you should know something about

ignoring Hopper no matter how outrageous, uninformed, or false his comments are from now on! Maybe at some point he will be posting just to himself! Feels good!

How does it feel to have two names for two personalities? I guess you feel you are the boss of everyone here and over everything. If it makes you feel happy and a complete person (Narcissist) then just do it. Makes no difference to me.

Grasshopper can ruin a discussion quickly…

Quote of the day. We start out with Cosper and somehow end up with a Hopper argument. Its a script.

True be told…I think we will see a steady diet of Shumway, Hifo as Seniors along with Bushmen at TE and a good smattering of these talented receivers like Cosper, Romney, Simon and others.

Losing Pau’u will hurt but I love how Sitake is treating players that mess up. He’s a lot like Edwards, his mentor. 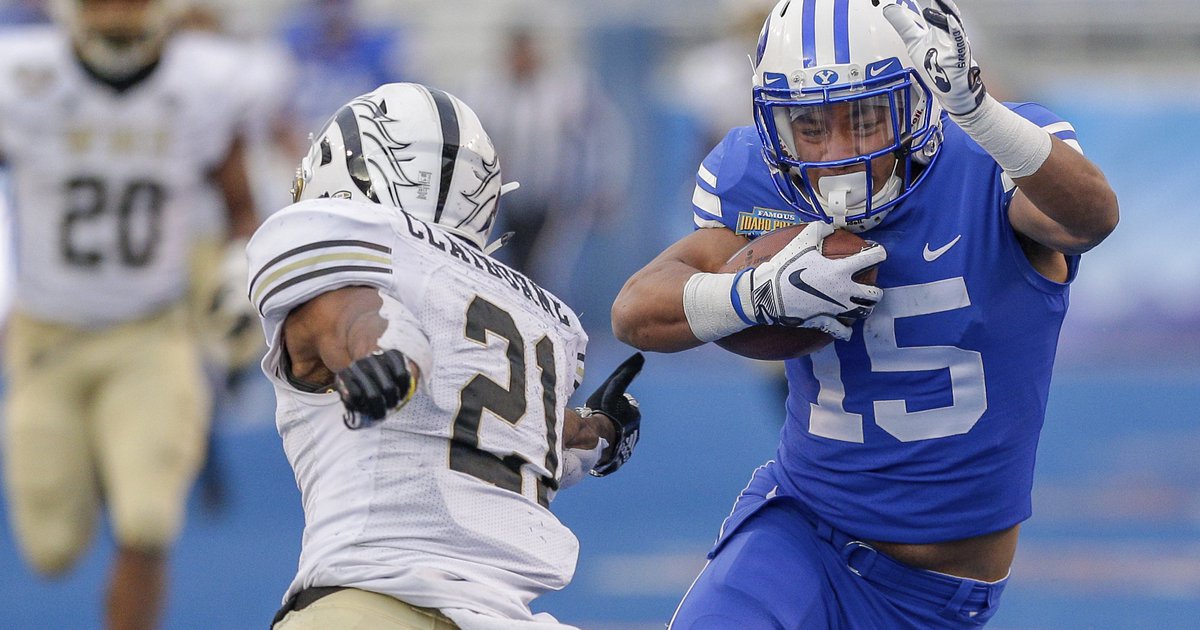 BYU was short on experienced receivers before junior Neil Pau’u was charged...

Provo • Trailing Western Michigan 10-7 heading into the third quarter of the Famous Idaho Potato Bowl last December, BYU desperately needed its offense to awaken after a punchless 115-yard performance in the first half.