How Pope has Changed BYU Basketball

This is an interesting article how Pope has started to change BYU basketball.

Analyze this: How BYU basketball coaches are crunching numbers to bring success

Cougars coach Mark Pope promised the heavy use of analytics when he succeeded Dave Rose last spring, and he’s delivered in a big way in his first season at BYU

The #1 reason Pope is winning, Analytics. Immediate accountability. This article highlights that players tend to tune out a coach when really every good coach stresses the same thing every single day. What analytics does is “show” the player where their strengths and weaknesses are, allows them to see daily what they need to work on.

Notice what article is posted today:
“The past few weeks, coach has been saying it every day — our defense is going to win us games,” said guard TJ Haws. “We’re at a point in our season where we’re put ourselves in a spot where every possession matters. Guys are bought in. On the defensive end, it’s life or death. We have to get stops every night. I’m happy with how our guys are responding and helping each other. We’re all together on defense.”

‘We have to get stops’: As season winds down, high-scoring BYU is...

The Cougars, who are in second place in the West Coast Conference standings, want to clamp down defensively on Loyola Marymount Thursday at Gersten Pavilion.

Good article, I am just curious about next year with so many seniors on the team this year. How will we fair?

talent and maybe some diamonds in the rough?

Pope will still largely be feeding out of the trough that Rose filled very well.
The team will be taller, but who knows what other talent Pope and his staff can bring in.

Good article, I am just curious about next year with so many seniors on the team this year. How will we fair?

This will be Alex Barcello’s team to run next year. We will be very big with some fair talent coming back but I would think that with a strong run into the NCAA’s, Pope will get a few really good transfers, maybe another good point guard.

We won’t see a run to the NCAA’s like this year but I could see a 20 win year. Not even thinking of next year because I am enjoying this group so much.

Even though you won’t respond, I agree mostly with you. We have a freshman WAC player of the year, 6’11” sitting out this year. A couple other big men with Lee coming back. AB and Harding starting at guards. A couple like Knell on the bench. I think we will be as deep. I think also a couple of transfers may be in the works. I like our chances next year as well. TJ will be hard to replace. I think Harding will shoot as well as Toolson. Should be fun…

I think we need to concentrate on this season right now instead of next year. I have thought some about next year, but right now, as was said in 1955 when the Brooklyn Dodgers won their only World Series in Brooklyn, the New York Daily News showed a picture of BKLYN Dodgers’ catcher Roy Campanella embracing the Bklyn pitcher, quote: “THIS IS NEXT YEAR.” Let’s think about this current season and after the 2019-2020 season is over then think about Next Year.

Well it was a win and and ugly game

Those kind of games are good ones to win. We missed Nixon. Defense was slow stopping their offense.

This is an interesting article how Pope has started to change BYU basketball. 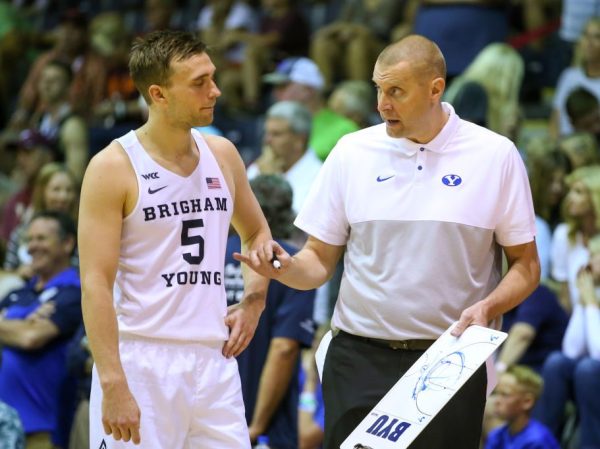 BYU Is Scorching The Nets From Even Farther Back