Wow, close this site and go to 1280 radio now and listen to Jason Beck on Bronco Mendenhall.

So do we lambaste Jason Beck for being public about his feelings and beliefs on our HC, or do we praise him for being honest?

Should his comments been better if directed more privately to those that are in a position to make changes, or did he do the correct thing by being open for all to hear?

These are all honest questions that I have no answers for, but I would like a discussion on this topic and read some of your intelligent, (Not overly emotional), but educated opinions without being Holier than Thou or hysterically out of control.

here is the link: http://1280thezone.com/index.php/story/read/dj_pk_jason_buck_former_byu_nfl_player

Jason Buck certainly is NOT a fan of BM, very critical. Says that Bronco drives the kids too hard, over trains them, does not have good relationships with alums (contrary to published reports) and does not have relationships with current players except for a few favorites. Also he calls Bronco a liar, saying BM says one thing publicly and privately does the opposite. All curious to me as a fan not close to the team.

I can confirm that Jason is not alone when it comes to alumni and donors feelings about Bronco. Been telling this board for years that all is not well internally here, but the BOT is fine with him and that’s all that matters to some.

Thanks Floyd for the link.

At my age, 80, my mind does not always function the way I want it to.

First of all, my thinking was limited to the past 10 years and not the glory years of the
the 80’s.

I had forgotten for awhile, all about the great Jason Buck of yesteryears not only while at BYU but also in the NFL.

My mind, playing tricks on me, made me think that the talking being done was by our own Jason Beck, and to me, coming from Jason Beck was earth shaking, It’s bad enough coming form yesteryears Jason Buck.

What do you think about the interview? Do you agree or disagree and why? I have not yet formed an opinion and what you think, matters to me.

Now VanNoy has jumped on and said that he does not have any dialogue with Bronco. Bronco in his defense said that he has been very busy with raising several small kids, being a head coach and head defensive coordinator. My question to Bronco would be, “So- what does a head coach do if he isn’t mining the past players for future talent?”

All power programs have a vast network of past players and Alums to find talent so guess KC is right when he calls BYU a mid major…to me it’s more like a community college in terms of building relationships with the players and the $$$$$ donors.

So can an old dog learn now tricks or are we looking for a new coach in a year or two.

Fish… Did you happen to see Bronco’s interview on KSL last night?

They asked him why BYU did not offer a scholarship to perhaps the best LDS football player coming out of Utah (Gustin)?

This kid had offers from just about every major D1 program and he was not good enough for BYU?

Bronco also mentioned his ageless titrate about players being entitled. He said he talks to the players and say player x is the player now, can you come, not play as much as you want, learn from player x and then you get your shot.

Seriously? If I were recruited and had the talent these young men have, I would tell the coach. “I think I can beat player x when I come in, all I need is a shot”

After that interview, I came to the sorry conclusion, that as long as Bronco is HC, BYU will be nothing more than mediocre. We may win one or two games against good teams, but we will never have the success I feel BYU could have if they just hired good coaches, recruit (not have the players prove they should be at BYU) top players and win…

Yeah, I saw it…pretty darn painful. Bronco looked every bit the kid caught with his hand in the cookie jar and telling his mom some made up story. Look, Bronco can say whatever he wants to about the kid from Salem but that kid embodies what BYU stands for and Bronco should quit trying to paint a horse a different color when he messes up.

Everyone in Cougar kingdom knows two things that Bronco does that infuriates the media, the base, the players…He plays favorites (Mr. Grit over Mr Talent) and his stubbornness is legendary.

KSL was right to show the Bronco interview followed by the kid’s father talking about how hard he has worked to get to where every D1 program in the nation offered…minus BYU…to be continued.

Not that I agree with this, but my understanding about Bronco’s recruiting policy is that he wants people that want to come to BYU. If they are ‘playing recruiting games’, he won’t offer them. He wants them to commit to BYU and then drop everybody else. If he offers them, and they continue to check out their options, he drops them.

Russ,
Bronco policy is that the player must recruit him(bronco) to offer a scholarship.

Every recruit check out all their options, for Bronco to think that they should only check out his program is lame.

Bronco has a HUGH problem with Star Athletes, personally I believe it has more to do with Bronco because he was not a star player, he had to gravel and fight to get a nod at OSU. That is why Bronco “prefers” walk-on’s"

Russ, what you say is true. Bronco does do that and to me it proves that he either does not understand recruiting from a kid’s standpoint or that he is just plain stubborn.

If any of us were a recruit or the father of a recruit for that matter and Bronco came with an offer, would we not say, Let’s see what else is out there?

I think to be a great recruiter, you first must understand the process from the kid’s viewpoint.

I agree with you. There may have been a time, that we might have gotten away with making a recruit bow down to us in order to get accepted into BYU.

More and more, with all of it’s recent changes, college football, if it is to be significant, is becoming more like a farm team for the NFL than remaining like the college teams we use to enjoy.

The Genie is out of the box. There is no going back. We must either change with the new rules or be left behind and free fall into insignificance.

Once they commit to us, we must continue to show our respect and appreciation to them, or they will transfer out and refuse to waste anymore of their time with us.

We must change with the times or be left out. I would hate to be the administration that refuses to grow in the changing times.

Well, that many be true. I thought the reason for the change was the whole recruiting debacle under Crowton. Wanted to find those that wanted to come. Unfortunately, I think Bronco has taken it a bit too far.

What you say is true. It is because of unfortunate events that took place, late at night, in the privacy of one of the players personal residence, that got Crowton fired and started this whole recruitment thing going in the opposite direction, and as you say, it has gone way too far.

I think that it is also true, as evidenced in the past 10+ years, that our HC, just plain out, does not like 4-5 star players for what ever that reason might be. (Perhaps jealousy that he, himself, the HC, never reached that degree of success as a player and does not know how to handle it)

And more from today ksl about that BM did say (two years ago?) going to win the NC with two undefeated seasons. KSL did asked why BM didn’t go after 4 or 5 star players. This article was right on. 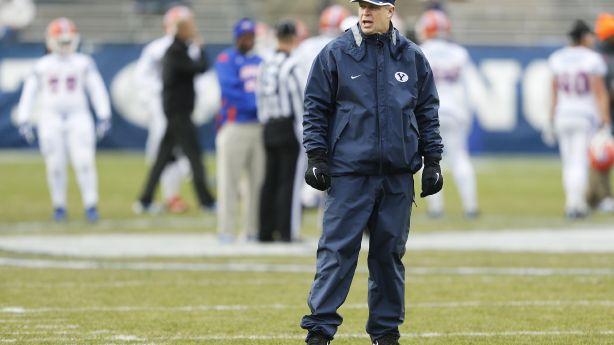 Since becoming the head coach at BYU in 2005, football coach Bronco Mendenhall has been very clear about his vision for the program. He has even openly mused about winning a national championship. Will 2015's recruiting class reach these goals?

I tried to open the attachment and this is what I got:

Ooops! This is not right.

There is no story here. Nothing to see. Nothing to hear. Head to the home page or the archives and you’re sure to find something interesting.

Let us know what you were looking for in the form below: