Looking back and forward

looked at the results from last year.
senseless losses and close losses. the team should have done better.
given Rose’s comments re the physical fitness of the players at the beginning or practice, and Nick’s comment “I’m better fit right now than I was at the end of last season.” and the clear statements about the losses after the big wins, this year should be much better.
reviewed KenPom stats from last year…BYU had the best in conference defence. out of conference not so much, so the team did improve defensively over the year.
I expect the defense to continue to improve. Especially with the bigs having fouls to burn in the center.
The new offense, getting the bigs involved better bodes well; still pushing tempo.
Horrible preseason strength of schedule. and last years was not great. None of the teams looks to be particularly strong except SMC Gonz Princeton and the P5 teams.
If this team doesn’t push 30 regular season wins it will have underperformed for a Rose team. http://www.bloggingthebracket.com/2016/10/14/12960476/2016-17-key-mid-majors-non-conference-schedules-college-basketball-gonzaga-wichita-state-saint-marys
That said the last three years have underperformed for Rose teams.
I’ve never seen Rose so excited about where the team is headed; including even the top 10 teams of the Jimmer era…
The schedule is set up like last year’s SMC in the sense that wins should pile up but won’t mean much for tournament chances. BYU’s games against SMC, Gonz, Col and Ill are essentially the season.
And as soon as I write that, the horrific losses to horrible teams last year shows that all the games count. BYU cannot lose to the lesser teams in conference and go dancing this year. They just don’t have the schedule to get the committee to look beyond the bad losses. More than 2 conference losses one each to SMC and Gonz will mean an NIT bid. again.

How about teams they may play in preseason tournaments? May be some good teams to play.

Several thoughts here Harold. Last year I wrote the Byu would lose a number of games because of Collingsworth and Davies free throw shooting. That is exactly what happened we lost six games to my knowledge at the end of the games because of missed free-throws.
There is a reason why Rose is so giddy over this year. Both TJ and Emery are in the 90 percentile at free-throw shooting that should be holding the ball at the end of the games. Byu is finally strong and every single position that Counts and Rose thinks he has up to six guys that can run the point. So yeah he has never had this kind of a team before
Lastly, you are correct Byu connot afford any cheap losses. While I think we will always lose a game we shouldn’t have, we will, that is the nature of playing basketball Byu should know how good they are by the time tournament time comes and they will get in by winning the WCC conference tournament

they will get in by winning the WCC conference tournament

The players on the team seem to think so.
Anger at those unacceptable losses last year have been mentioned by several of the players. That emotion, in addition to the talent of course, is the main reason I think this team could finally win a WCC title, regular season or tournament, in the next couple of years.

TJ projects as the third highest efficiency for freshman coming into the season. But still not scoring as much as big bro. http://www.si.com/college-basketball/2016/10/17/
I think they’ve got the efficiency reasonably accurately but somehow I’d be shocked if the scoring was that low for a primary ball handler on the team.
Rose isn’t the only one who think’s TJ hasn’t stepped back from his 4 state titles in hs form.

10 PPG is not too shabby for a true freshmen. 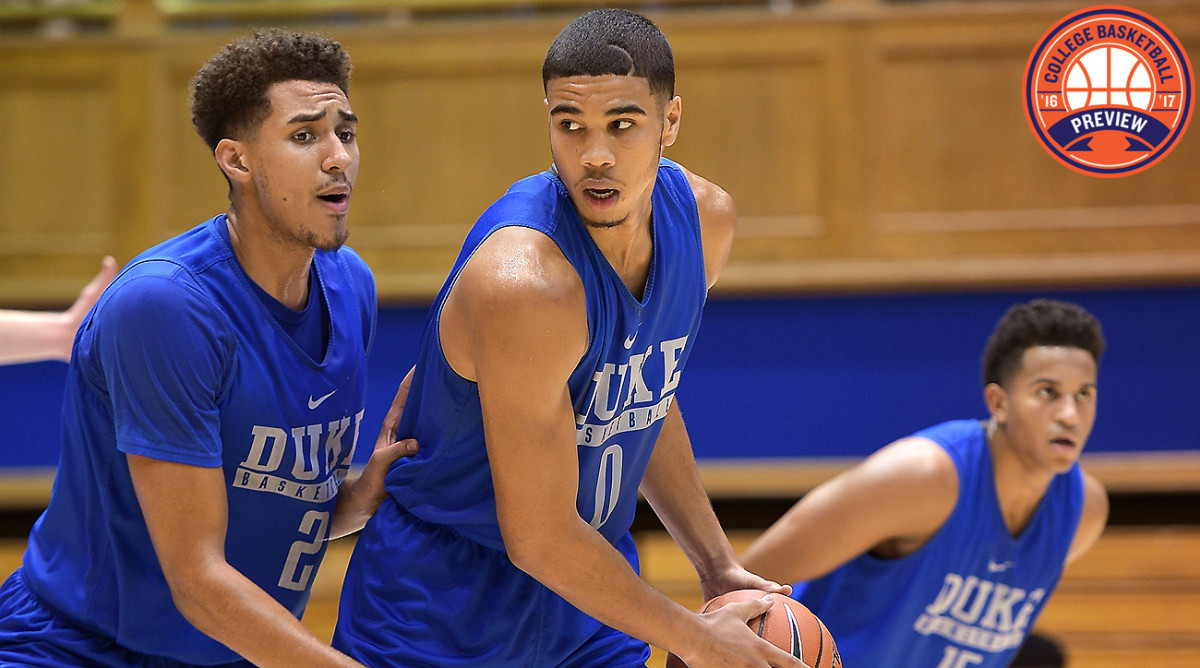 The top projected freshman scorer this season isn't from a traditional powerhouse like Duke, Kentucky or Kansas.

Let’s not forget Elijah Bryant. I met him in the athletic offices the other day. His size and strength are legitimate. I’m told he’s also very athletic. He is an LDS kid who was not highly recruited out of HS but who did enough his freshman year to get a lot of attention. My pause for caution is that, even though he was conference freshman of the year, he was a turnover MACHINE, with TEN games with 5 or more TO, and two with a hard to believe 8. To put that in perspective, Emery had zero 5 TO games last year as a freshman. So I’m interested to see how Bryant handles the ball, and whether he is a good or a reckless passer, but he will be a big plus for us (in a month when his cartilage surgery heals up).

I’m cautious about him as well.
Carlino, Fischer, Aytes, Nielson all come to mind as players who the starters and coaches raved about during their red shirts and then didn’t live up to the hype totally.
Fischer and Carlino would have earned it but for their inconsistency.
Aytes total bust as least so far.
Nielson flashes of brilliance but…
Bryant? Hasn’t proved anything yet.
But of course with 9 new players
and only 2 players, Nick and KD, with substantial time left from last year…
I’ve never seen Rose so excited…I hope he’s not just feeding off the crowds there in Provo. He wasn’t so excited the last two Jimmer years though…

Rose simply brought the LP championship team to Provo, complete with Coaches et al. All those years of early morning ball drills the Haws are legendary for. The guys that won 4 straight state titles, that went to all the tournys nationwide and beat the best in their own gyms. They look at these high school gyms of the WCC with distain (outside of Gonzaga), they want and crave the national stage. When they get together, they don’t talk about winning the WCC, they talk of final 4s.

Never forget that because Emery, TJ and to a lesser degree, Mika all commited early to play in front of their families and PROVE that big time could come to Provo. It’s why Zeljaas commited. Never forget that Dastrup changed his mind, Childs and Bryant all chose to come here because of the LP boys vision. Every single guy that I have mentioned here were recruited by programs like UCLA, OSU and Duke, only Jackson bolted.

You make great points about the other RS guys you mentioned…Fischer really got it together his senior year when he started going to the basket more. But I had serious inside sources in BYU hoops telling me that Aytes was the real bleeping deal and as you say he has not done anything yet…

Ditto! We have never had more 4/5 star talent and athleticism, and I humbly submit that in basketball, the big fast guys who can shoot and bang will beat very earnest, scrappy, unathletic guys more often than not. I love our roster, and couldn’t care less about Emery and Haws being “young.” They have a lot to prove and I’m excited to see them do it.