watch out for that Ferrari. Hahaha 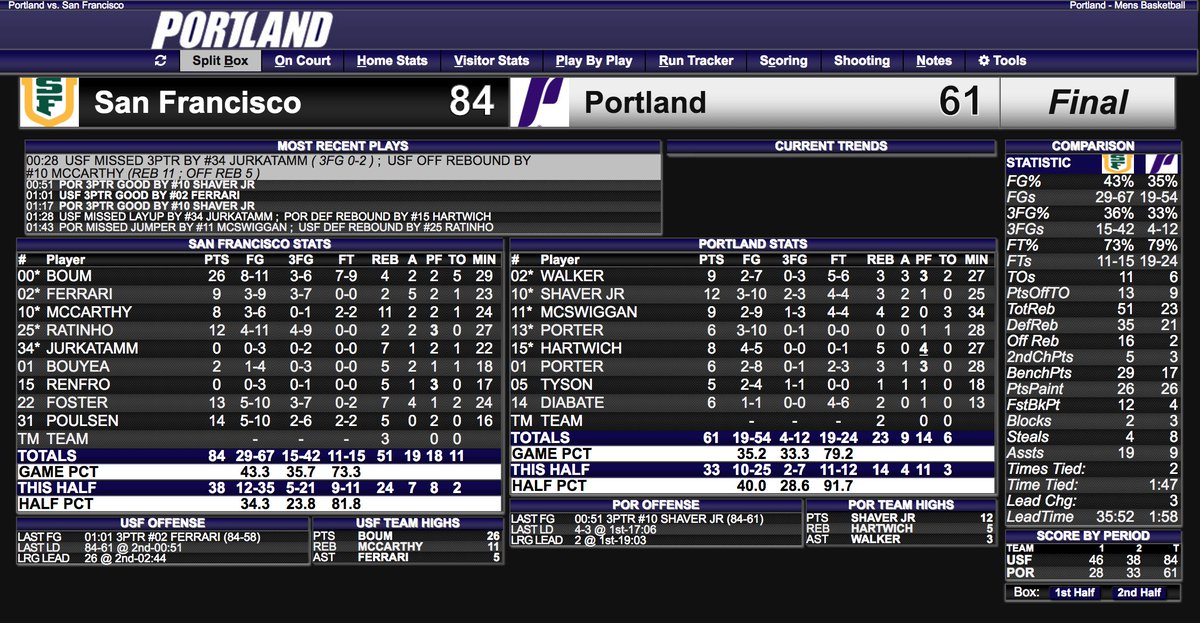 One of the reasons I write up these scouting reports is to spot tendencys. SMC is a Center, Landale. exceptional point guard and shooting specialists. Right now Zags are on excetional guard, Perkins and a lot of big men who are hot and cold.

SF is a bunch of guards who do a lot of things right. typical of the WCC.

We cover red hot freshman double 00, Boum with Hardnett and Cannon or Haws. Boum is the only Don that shoots over 40% from 3 (unlike SMC who have 5 guys over 40%)
Ratinho, 6’5 is a 3 point specialist, Seljaas or Eli
Ferrari gets Hardnett or Cannon, he is Mr assist
McCarthy gets Childs, no brainer
Foster, 6’5 gets Seljaas or Eli

The Dons will have their hands full with Childs and Eli. They can cover Eli with Foster but if we have Dastrup in the game, they will be over matched down low and it remains if we can make the pass into the post.

Unlike SMC, they sub a ton of guys and play uptempo ball.

This is a trap game so BYU better bring its A game.
Childs gets over 20
Eli has a big game of 20
Haws gets it going
and I like both Cannon and Hardnett to abuse the freshman Boum and one or another get over 10
1st team to 70 wins

Thanks good analysis-it will be a tough game for BYU, but dominate down low and good D on the perimeter should workout well

If Dastrup is in the game, how does BYU contain a guard oriented shooting offense? Matchups will be the key and we will have to adjust quickly if they are hot from the outside.

Yep SF will be a different challenge, but the really good coaches adapt, but at the same time we have to exploit their weakness inside. I say Dastrup is a better option than Worthington in this game and any other game. If BYU keeps giving up looks outside they will have to go 4 and one. BYU has owned SF so I give them the edge.

Against weaker teams yes. He made several errors against SM and only 1-4 shooting. He will get better and by next year he will play a lot.

Yep SF will be a different challenge, but the really good coaches adapt, but at the same time we have to exploit their weakness inside. I say Dastrup is a better option than Worthington in this game and any other game. If BYU keeps giving up looks outside they will have to go 4 and one. BYU has owned SF so I give them the edge.

here’s what Lawless republic had to say 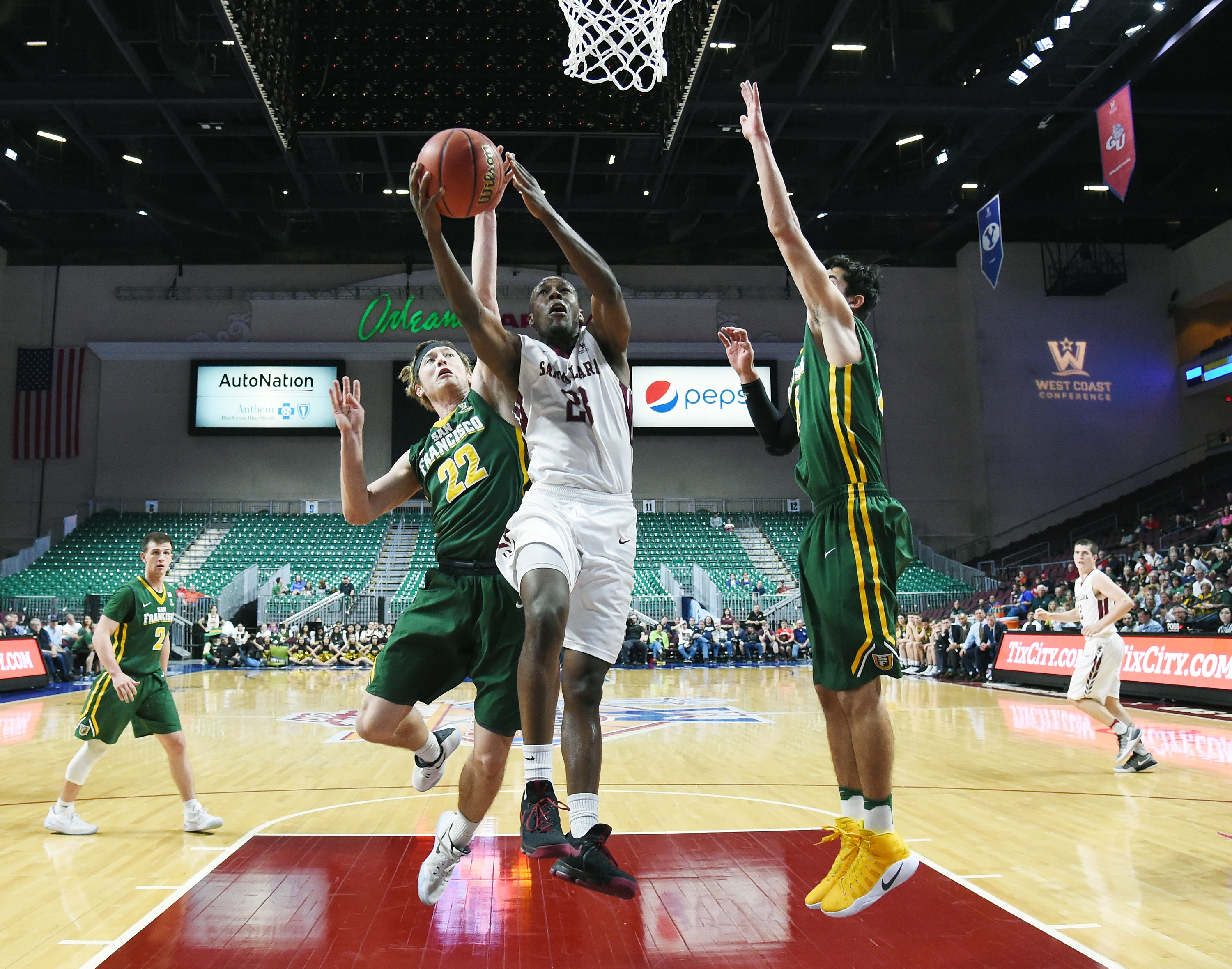 BYU basketball will look to bounce back from a disappointing loss to Saint Mary's when the Cougars square off with the San Francisco Dons on January 4. BYU...

This will be an interesting game. It will show the mindset of BYU coming off the loss to SMC. I expect BYU to win this game, but if they come in hanging their heads, it won’t be pretty. Defensive intensity and dominating inside will be key. I’m figuring Seljaas for a mental block right now, so this is an opportunity for him to get some different types of shots off the move and inside. Also hoping Dastrup gets significant minutes. Normally if Bryant, Childs, and Haws play well-BYU wins. LOOK 4 Cannon to play well distributing and hitting 3s because SF will be sucking inside trying to double, so Childs is very effective when he kicks the ball out on the double team

Forward injury report
BYU is dealing with a forward shortage. Currently, three BYU forwards are sitting out for injuries: sophomores Braiden Shaw, Ryan Andrus and Dalton Nixon.
Shaw returned from an injury last week, but will once again sit out as he rolled his ankle in Tuesday’s practice. Nixon last played on Dec. 6 against Illinois State and has been sitting out with a foot injury since. Andrus hasn’t played in any games during the 2017–18 season because of a knee injury. Rose said the staff recently learned Andrus will need to go in for a procedure on his other knee, which may officially keep him from returning this season.
“We’ll know when they actually do the procedure if it will be a short period of time or if it will be a situation that will force him to redshirt,” Rose said. “We’ll know that probably a couple days from now.”

Nixon hurts them the worst and they will be better when and if he returns. I have never been much of a Shaw fan, fumbles the ball away a lot, but he can surprise you. I thought Andrus had good skills as a freshman so that’s been disappointing and probably a redshirt. Hopefully Dastrup gets more time and blossoms-

I agree. Nixon is aggressive and a banger. That’s why I think we see Worthington starting because between Luke and Payton Luke is more of a banger while Payton is more of a finesse player. Payton plays well spacially while Luke plays well with his back to the basket.
I personally think Dastrup should play the 4 or shooting forward at the 3. And, he should start there. He should play 25-30 minutes as long as he isn’t a liability on defense. Tonight, against SF, I doubt he will play a lot of minutes as SF shoots 30+ 3’s per game.

Dastrup came “clanking” back to earth last night. Missed badly on all his long distance shots. He did get some rebs toward the end to seal the deal. I will say that Dastrup getting 17 minutes to Seljaas’s 11 feels about right to me.

Coaches did a good job with their timeouts to end runs and redirect traffic last night. Refs were head scratchers out there, sometimes they would let the guys bang out there and then out of nowhere call a ticky tack foul (childs) out of nowhere

I think that amount of minutes is about right. I think when Dastrup settles in with confidence he will get better. I don’t know if it’s me or not, but Seljaas looks a little thin right now. A good off season strengthening program this off season might help him. Over all i thought the officials were ok, but I though Haws got a couple of questionable calls on him. We will see how they do against Pacific tomorrow . BYU has owned SF the last few years and that’s why I picked them to win. Outside of SMC and Gonzaga, I see San Diego as one they might lose, but with BYU it’s hard to predict. I do feel as long as they play good D, that this team is better than I thought and much more disciplined. 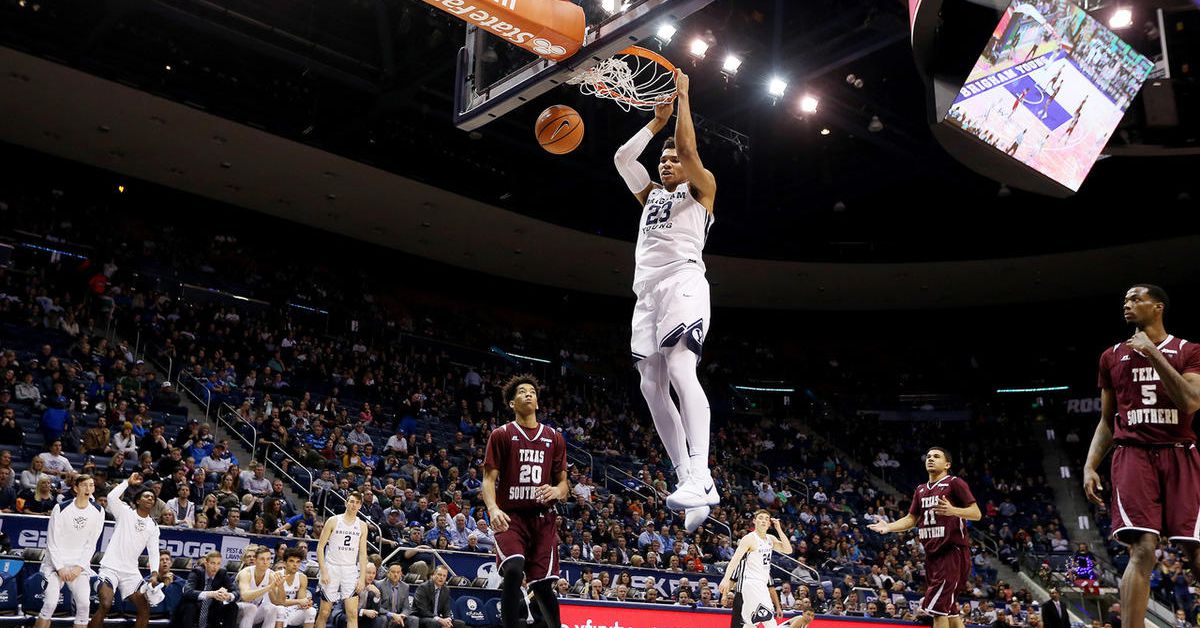 BYU's Childs came up big vs. Dons when it counted; Pacific up next

In BYU’s first West Coast Conference road game of the season, coach Dave Rose liked what he saw from his team in terms of its execution, resilience and defensive effort, especially in the waning moments.

. BYU has owned SF the last few years and that’s why I picked them to win. Outside of SMC and Gonzaga, I see San Diego as one they might lose, but with BYU it’s hard to predict. I do feel as long as they play good D, that this team is better than I thought and much more disciplined.

IT is hard to imagine that SF beat a ranked Nevada team. But when you realize that they average 35 tries at 3 per game, the answer is, they can get real hot and when a team full of guards get hot and you don’t knock knees, its a win for them.

Rose did a great job of calling a timeout to regroup at about the 6 minute mark. we took over after that. Rose also said that he was out coached in the SMC game. My tea leaves say that Bennett plus a bunch of Seniors (who know what they are doing) beats Rose with a bunch of Soph.s , that is all that was. Our day is coming.

Exactly! It’s what I’ve been saying. He admitted it was a mistake to drop down to double Landale and leave the shooters open in the last segment of the game. The overtime was a mistake to go primarily to Childs trying to get Landale to foul out. Childs was gassed and coming up short on every shot.