1st- How many of you knew that McNeese State was in Loisianna?

McNeese State University is a public university in Lake Charles, Louisiana. Founded in 1939 as Lake Charles Junior College, it was renamed McNeese Junior College after John McNeese, an early local educator. The present name was adopted in 1970. McNeese is part of the University of Louisiana System and is classified as a Master's University. The selective admissions university consists of six colleges and the Doré School of Graduate Studies. McNeese is accredited by the Southern Association McNee...

They have a QB that can really sling the ball, other then that, there is very little informantion on MSU.

BYU should beat these guys by three scores.

after all the upsets last weekend, I don’t gaurantee anything.

did you see the fake fair catch? LOL 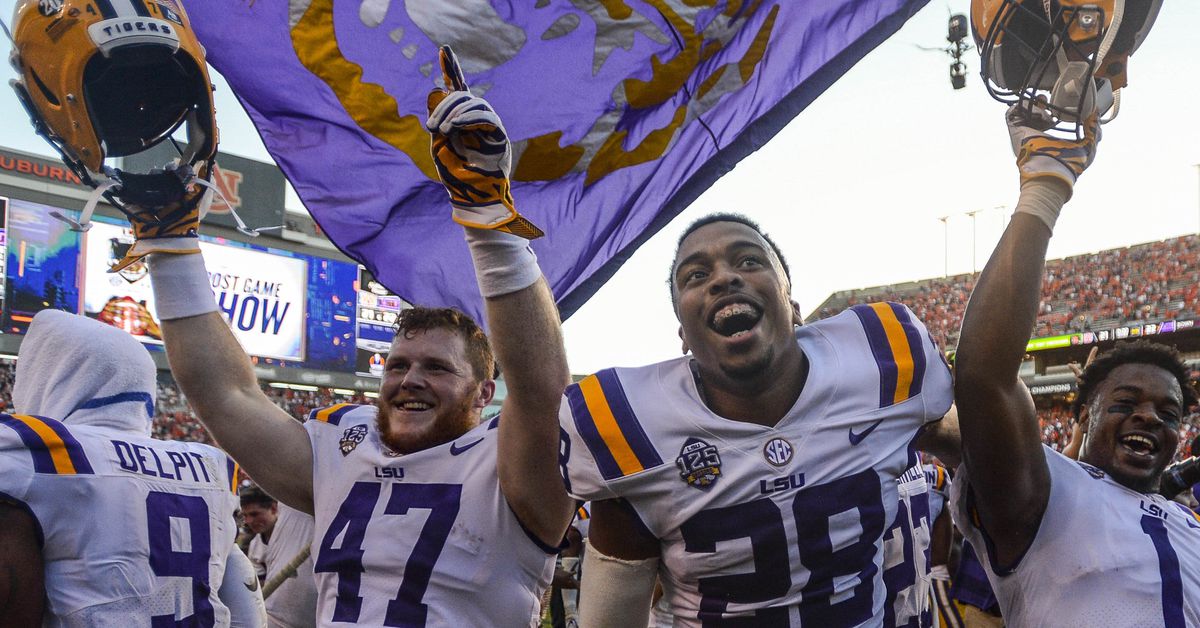 LSU, BYU, and the power of identity (plus 8 other teams of the week)

Here were the 10 teams who most impressed in college football’s Week 3.

Fun article on BYU and LSU but please move on to the Kansas article just below BYU. What a weird would we live in. Kansas got beat by Nicholls in week 1 who got worked by McNesse St this past week…Crazy world

ESPN has BYU as a 96% win probability. Vegas has it at -21 for the Cougs, I said three scores without even looking at the odds.

Depends on if the team doesn’t look past NS. I hope they learned with Cal to work 110% for every game. We have a lot of improvement that needs to be made in the passing game. I’d like to see Wilson get the start and rest as many starters as possible. Maybe let Hifo throw the ball some too

Do you even know what Grimes offense is about? Right now, it is all about the run game, that is where he feels we can win games.

Personally, I think he is setting up the base system for offense, as time goes, he will add more passes. Both Grimes and Sitake are all about smash mouth football…

22 passes. We are still passing. 89 yards is pathetic.

The passes in this scheme are a majority of “Short” passes, because it is what works… Right now…

Sorry you can not understand how a “Running” team uses short “passes”.

McNeese has scored a TD on its opening possession in all three games this season; BYU has gone nine consecutive games without allowing an opening-possession TD.

McNeese will play on BYU’s level for about a half, or until the starters run out of juice. Then BYU will impose their will on them. Tight game for awhile then we pull away. It s all about the conditioning. BYU has it but does the other team?

I do want to make some predictions on this game.

Tanner passes for more then 200 yds.

Start Wilson and that will catch MN off guard

Then we will pass for over 200 yards.

I do want to make some predictions on this game.

Tanner passes for more then 200 yds.

I was at the NAU / Southern Utah game Saturday, so I missed the BYU game. Obviously Tanner didn’t pass for much this game, but I don’t know the nature of that at all. It looks like his yardage per attempt was par for the course (ie., really short yardage). Was he and Grimes just “taking what McNeese St. was giving him?” We clearly shut them down defensively, so it didn’t matter, and it appears that we shut down the offense in the second half as well.

Any cause for concern this weekend, and beyond, based on McNeese St.? I think it’s clear that our defense is going to have to play lights out and not have any lapses, because our offense isn’t going to do much, no matter whom we play.

I don’t think we had to show much in this game. Wash will test our secondary
We more then covered the spread so on paper we played better then expected
Wash will tell us everything about our team we need to know.

I fully agree that this week “pays for all.” If we can beat Washington on the road, Wisconsin-style, without a passing game, then I will shut up about Mangum and our passing game.

Teams in front of us were overrated as well. So, we moved up the ladder. If there are better teams then they wouldn’t have lost. But, it will all shake out. Teams we didn’t think were very good are scoring a lot of points like USU and Hawaii. We have to be mentally ready every game. No easy games!

I read an interesting article in the Desnews today…

The quote is:
“Sitake said when injured starters are cleared to play by doctors and trainers, they aren’t automatically handed their starting jobs. THEY MUST EARN IT IN PRACTICE.”

I think that says a lot about the culture change at BYU this year. You earn playing time every week in practice, just because you are a starter one week does not mean you are automatically the starter for the season.

In fact, another article mentioned that Shumway and Romney are listed as both #1 on the depth chart and will both start against Washington.

I believe Tanner numbers would be better if we had receivers not dropping catch-able passes.

I also notice that Tanner is still the starter, so I guess he is pleasing Grime dawg…

I will shut up about Mangum and our passing game.

I sure hope so…

JK, I do enjoy our discussions… event though we disagree on Tanner.

Ya, but if we are running sweeps Hilo has to play a lot. And he’s nit dropping passes.
I did like it when Canada fumbled that he didn’t get put back in the game right away.

The quote is:
“Sitake said when injured starters are cleared to play by doctors and trainers, they aren’t automatically handed their starting jobs. THEY MUST EARN IT IN PRACTICE.”

As opposed to Covey at Utah. Witt is going to kill that little guy.

Wash will be ready for the Jet sweep, that is all he talks about. We need a wrinkle, a TE blocking for the sweep then leaking out into the void. Simon has been a big bust, looked good in spring (where you can’t hit) and drops everything in real games. Gunner is my guy.