SCU goes into Valpo and wins in double overtime. They led in entire first half while Valpo scratched back in the 2nd. 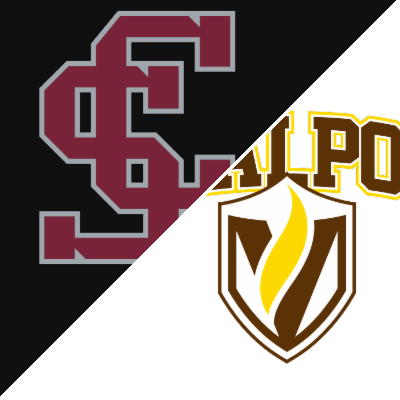 Get a recap of the Santa Clara Broncos vs. Valparaiso Crusaders basketball game.

SC has a star, Brownridge is a 6’3, 200lb senior. dumped 30 on Valpo-6 threes. Played 49 minutes. Emery duty
6’7, 225lb,sr Kratch is their inside threat, will dump 3s on you as well. Nice fit for Childs.
Hauser, 5’2, 170lb, so is their most consistent scorer @ 16 ppg over the last 5 games. Rose or Haws duty.
SCU at Center is in big trouble. Jadersten will foul out, guaranteed and so goes any inside production. Mika and Childs will eat their lunch inside.

SCU is a slow down methodical team and that may work at home but BYU will run these guys out of the Marriott.

I think BYU will win the game but I won’t guarantee it. SCU beat Valpo on their home floor and that says a lot. I have seen that Brownridge guy and he can shoot lights out, in fact they had Gonzaga by the throat a couple years ago in the tourney until the officials stepped in and helped the Zags, who of course beat BYU in the title game by 10.

BYU better be on top of it…

Fish, you better count up your points again! Which players will be allowed off the bench, with enough playing time, to score the other 13 points in your prediction? That is the problem, Rose has to allow more players to get comfortable to score 80 points a game. Our defense can’t be counted on to keep opponents under 80.

Our defense can’t be counted on to keep opponents under 80.

I watched our guards stop their stud penetrators over and over the past couple of games. That has not happened in years at BYU so I am encouraged. With Childs and Mika in there I don’t see teams getting many boards or scoring down low and only foul problems could slow that tandem down…and now we get Kaufusi I think BYU can keep teams under 60 points if they wanted to but why would Rose when he has more firepower on this team then anyone not named Gonzaga?

We have seen Haws come alive over the past 3 games. Beo is 1st off the bench and I only see his minutes increasing, I am very high on him. An I hear Brayant rumblings so I think we are getting sound at guard.

Rose will always try to out run and gun the opponent, its his signature, but you have to play defense on the road so we will see.

Hey, merry Christmas to all. Hope you all have your families around you and nothing but the good stuff.

I will be sitting down to my favorite finger foods tonight and prime rib for Christmas dinner.

Merry Christmas all of you too! Fish, when the food plates are passed around the table tonight, don’t pass on the “reality” plate!