If you look at the stats of the first 2 games Wisc. played two lousy teams. Alex Hornibrook is a 3rd year QB who does not have to do alot because of Wisconsin’s workhorse rushing. BYU is pretty good at stopping the run. They are averaging close to 8 yds/carry. Byu has serious meat in the middle and great LBers. I am interested in this chess match. Jonathan Taylor is a prototype NFL running back, 5]11, 211 pounds of bowling ball. I am not saying that BYU will stop Wisc.'s run, I’m saying that BYU will fare better this year then we have in past years. We have the beef. We have talent where it takes against the run.

Homibrook does not have to throw a lot but when he does, he has a favorite receiver in A.J. Taylor, the Jr is small, just 5’ 11 but built and is a speed freak, just the kind of guy that our Ghanwoloku should match up with.

Wisc. will stop BYU’s run game and force us to throw. Things I’d like to see is more El Bakri… a lot more. Both as the lead blocker for Canada ( I felt that BYU got away from that in the Cal game, instead trying a Hoge experiment that fell flat) I would love to see more El Bakri bleed out into the flat for outlet passes and bash those little DBs in the open field.

Vegas has this game as a 21 point loss, ESPN has it 32 loss. I think this will not be a blood bath but a competitive game. Cal taught our coaches a thing or two, Grimes will get it right a little at a time. No way we win this thing, but we are far from the kitchen grease fire of last year. BYU has a defense that contain the run. This has a total different feel then the cal game. I expected us to win that thing but as the game wore on, I could see that we did not have the answer. Goin into the Wisc game I expect us to lose but not by that much.

I see our offensive ineptitude hurting our defense. They will hold at times and for a while, but they can’t hold on for 40 minutes. And our secondary will give up some bad plays to Hornibrook.

I don’t think it will be a close, hard-fought game. I think we will lose the time of possession game, Mangum will throw for 120 yards, and we will struggle to gain rushing yardage. Rhett Almond will develop a sore kicking foot from punting . . .

hahaha. Pretty funny visual…We actually have a kicking game. Just sayin, "If we slow down the run, Hornibrook did get picked off in the NM game. Unlike Floyd, I really like our defense.
Listening to Traffic right now as I write

I think you are right. The game will be closer than the 32 pt line. There is a lot on the line for pride and we may see a new QB on the field before the coaches are blown up in the media and fandom.

Last year I was at the Wisconsin game. I felt like they could have scored 60 but pulled their foot off the gas early. Hornibrook looked like a Heisman winner and their line simply abused our front 7. I see much of the same this time. So far in two games Tuiaki seems very committed to what we did last year: 3 or 4 man rush, everyone in his own lane, and telling the back 7 “keep everyone in front of you” and hope for a mistake. Grimes looks like a run first, shorten the game guy, which could eat time and keep the score a bit closer, but I’m not optimistic.

I think we also have seen that we don’t do a good job on tackling. We don’t wrap up well especially the DB.
Something has to happen on the offense. Again, what happened to Katoa? I like his running style.

Good post fish about the Wisconsin game. I agree pretty much of what you had to say. To me I think we should start Mangum and give him a very short leash, three or so series, if we get that many in the first quarter, then it is either Wilson or Critchlow at QB, if Mangum fails in the first quarter.I don’t expect us to beat the Badgers either. But we have to be competitive. 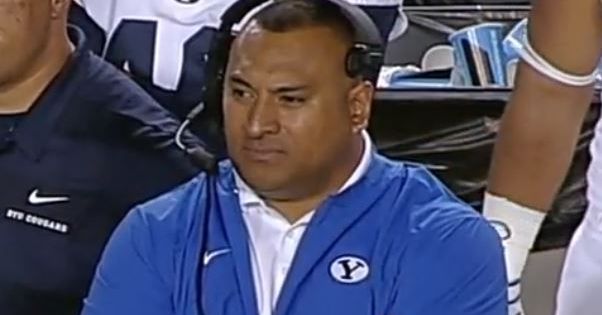 It was a bear market for the Cougs

Wisc. is going to beat BYU but just how bad will it be? Many computer models have the game 44-11, I have it much closer as in under 14 points. We will see.

As long as they compete, I am fine… looking like they don’t care bothered me last year.

I did hear something interesting about the Warner kid, they are using three safeties — Dayan Ghanwoloku and Austin Lee as the starters with Troy Warner coming in off the bench. Warner is coming off a season-ending Lisfranc (foot) injury last year, So I am wondering if that is why he looks so apprehensive on the field.

Having never had a serious injury I can only imagine what goes through these guys minds. Having talked to plenty of athletes who have, they all say that it is on their mind, especially for at least a year after they are completely healed up. I would say that is what we are seeing from him. I would compare it to a returned missionary who comes back from 2 years away from high level sports. I, like everyone else exercised daily and hit the gym once in a while on P days but the body just looses sooooo much muscle mass and coordination that it takes at least a year to “come back”. The Covey kid that plays for Utah is a exception and it may be that he got special treatment on his mission in terms of workouts but by in large it takes time for our minds and bodies to get back into game shape after injury.

According to Jordan Pendleton who use to play for BYU and now owns a Pendleton Performance. The very day Covey came home from his mission, he was in the performance center getting back in shape. I guess there are some perks for being the grandson of Steve Covey

I have had two major surgeries in the past two years, I can understand the mental side of it.

Compare a painful injury to coming back off a mission? Only if you contracted Ebola or something serious. I’ve had several knee injuries and shoulder. A broken thumb and fully dislocated middle finger. 3 knee surgeries and now a bad back. I’ll take the mission

Yes, there is apprehension but in the mix of a game, the adrenaline takes over and so does the ego if you are a true athlete. The only thing evident is if the injury is actually fully healed. I would say his injury isn’t fully healed yet and he doesn’t want to react quickly. “The eyes don’t see what the mind doesn’t know”

After a big year on a really good HS team, my son got lots of small college offers to play WR. He broke his fibula a few games into his senior year. A full year later, in college, his body had completely transformed–4-5 hours per day of strength and conditioning training made him a new person–even while adding 20 pounds of muscle, his true 40 come down from 4.65 to 4.58. But no matter how much strength and speed he had, his leg never felt right. He just didn’t run with the same fluidity,. Even though doctors and xrays said it was healed, he never felt like he could cut and explode in traffic like he could before. He left the game after his freshman year–with no regrets, by the way. I can totally sympathize with any college player who may be going through the same emotions.

I think Troy Warner had a very good game. And I have never seen a player (Covey) get so beat up in a game in my life and still get up over and over again. Wash hit him so hard I did not think he would ever get up from the 1st hit let alone the 4th or 5th. I think Witt is desparate and certainly not looking after the health of his best player. Huntley looked like a disaster out there.

Utah’s defense is amazing to watch.