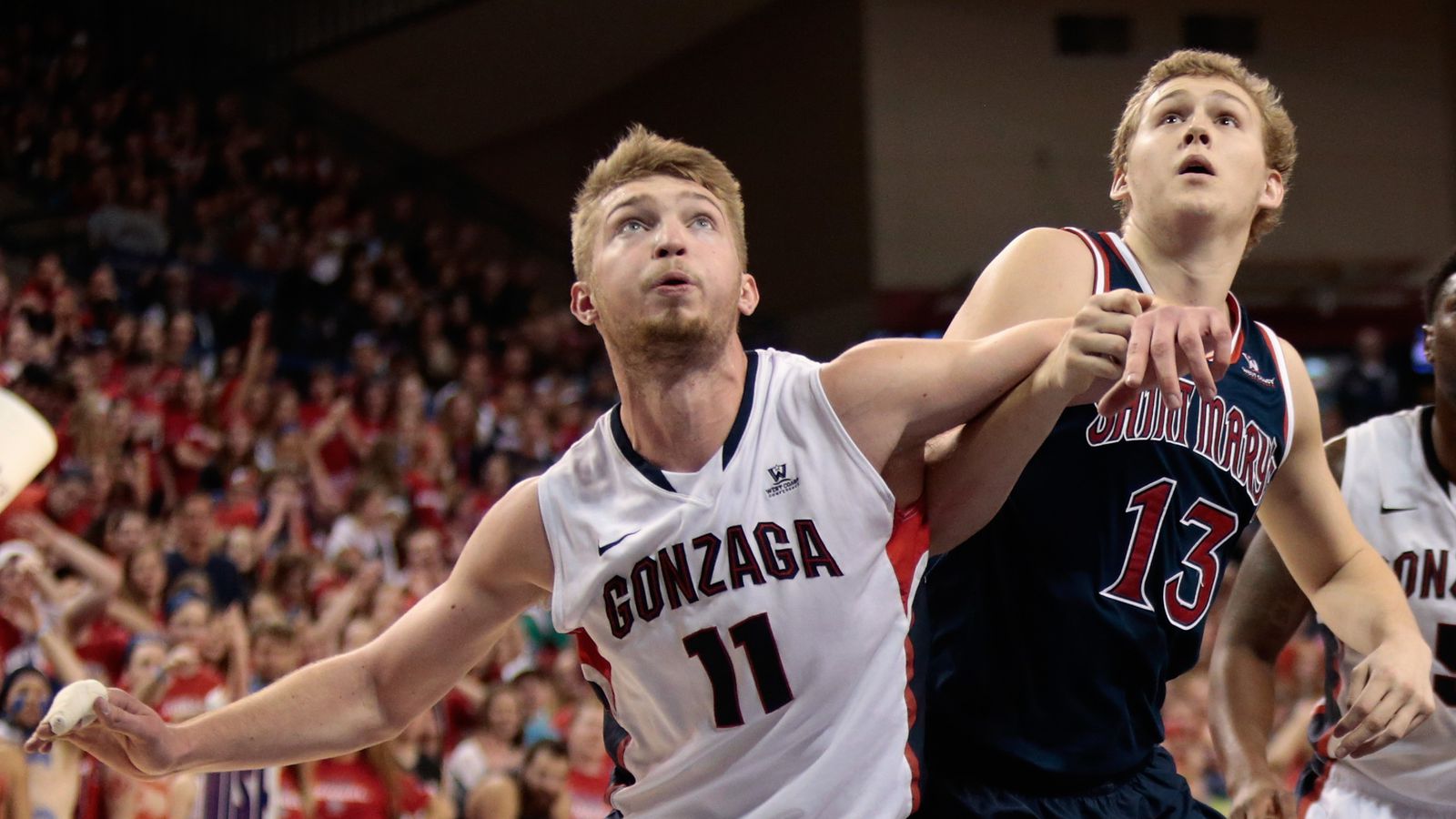 Who should BYU fans root for in Gonzaga vs. St. Mary's tonight?

Who should BYU fans pull for Saturday night?

Right now with SMC beating the Zags at their place, SMC would be the 1 seed and Gonzaga ties, sharing the WCC crown, would be the 2 seed.

If BYU wins out, we would be the 2 seed behind SMC unless SMC lays an egg in SF, then BYU would share the crown with all three but would jump up to be the 1 seed.

Now if only we had played some ball when Pacific was in town.

Last night showed we don’t have to rush shots and force shots to score 91 points. If we can do this each game, keep pressure on the opposition and know we can shoot well. (FT shooting has to still improve)

Gonzaga is about as bad as they have been in the last 15 years… not even the officials and St. Mary’s could give them the game last night. I said they weren’t as good as in past years but after watching them last night I realized that they are really bad this year.

At about the 4 minute mark they were down by 11 and St. Mary’s started tanking when one of their best ft shooters barely hit the rim and then air balled two free throws. The next several fouls and multiple turnovers by SMC gave GU every opportunity to make a run and they choked it away. Wiltjer is their outside threat and Sabonis inside. You take care of those two and it is game over. They have nothing else.

BYU blew their opportunities this season losing to Portland and Pacific…

And yet they still have a chance… in the very weak wcc this season.

Or other teams in the WCC aren’t as bad as you think. And GU’s defense caused the turnovers at the end.
I do agree that they are up and down as is BYU. But not to the extent you think and for the reasons you think. It’s all about perspective and your rationalization. When the WCC and their officials don’t work for your conspiracy you come up with some other reason.

Go look at any, for that matter every, statistical analysis of the WCC.

Yes, Pacific and Portland were terrible losses. This was the year that BYU could have gotten their first league championship and we blew it. I guess we are still in the race statistically but I don’t see St. Marys tripping up at this point. I was at the game in Provo on Saturday. I was at the game early and watched as BYU warmed up. I had a couple of observations. First, Chase Fisher is the best pure shooter on the team. In warm-ups he hit 80% of his 3 pt shots, he was nailing mid-range shots and was knocking down all his free throws. That said, Emery is more of a gamer. Chase was 3-11 in the game. He had some wide open 3s he couldn’t knock down. Emery seems to have the mental toughness to step it up under the lights. Emery was 7-12 with 9 rebounds and 5 assists. He has just been terrific of late and will be fun to watch the next few years. Kyle Davis was frustrating to watch warm up. It always bugs me to watch bigs that like to either stand out at the 3 pt line chucking up shots or wasting time on other shots they never take in a game. Davis has a nice little jump hook that could be a killer shot if he could stop ‘back ironing.’ I watched him back iron 80% of his shots on a little jump hook drill he was doing from his left. He was better with it on his right side but he only practiced it for 5 min and then spent the rest of his time doing an assortment of dunks in front of the student section. I’d just like to see him practice shots he needs to improve on every chance he gets. That’s what made Tyler Haws so good. To be fair, Davis wasn’t the only one show-boating for the students. The other observation was that Kaufusi is an athletic freak but unskilled with his offensive moves (I know I’m stating the obvious here). I wish he would get better with his touch around the basket. KC has really improved his low post moves. He doesn’t beat players that much with his quickness but he has gotten really good at using his size advantage to back his defender down and then using ‘up and under’ and pivot moves to create space. Kaufusi could do the same type of moves if he worked on it. Brandon Davies was also good with his footwork on post moves. If Kaufusi could add that and a jump hook to his game (along with Davis working on his jump hook), maybe BYU could start getting more offensive production out of their bigs. Finally, it was nice to see all the bench players get in the game. Guinn looked pretty good. He is strong and has a good motor. He was an outstanding 800 meter guy in high school which is pretty unusual for a guy his size. I don’t know how far he will go in the program but he’s someone to keep an eye on. I like how hard he plays. He is a little undersized as a forward. Like KC, he was a terrific rebounder in HS. He is a little lighter than KC but quicker and a better shooter.

Texas is ranked 19th at 16-9. Iowa is 4th with 5 losses. Notre Dame is 12th 18-7. Parity it basketball is extremely high this year. Call it socialism a la basketball. The capital or talent is spread around . Bottom feeders aren’t as bad as in the past and you can’t use raw statistics to justify your claim as in some years.

You are right about that. I heard Joe Lunardi saying there isn’t a dominant college team as in some past years. It should be fun to see the NCAA tourney play out. Who knows how many upsets we’ll see with all the parity. Let’s just hope BYU finishes strong and finds a way back to the tourney this year.

Depending on who we get we have a shot at winning a couple of games as anyone else.

Here’s What We Learned from last week’s penultimate round of games heading into the final week of the regular season:
1.That BYU is capable of just about anything – good, bad and downright inexplicable – was revealed in its home-and-home games against travel partner SAN DIEGO. On Thursday night at the Slim Gym (Jenny Craig Pavilion) the Cougars escaped with a 69-67 win over the last-place team in the conference. Two nights later in Provo and sufficiently motivated, BYU crushed the Toreros 91-33. That’s a 2-point win followed 48 hours later by a 58-point win over the same team. What does it mean? It means BYU is the team no one should want to play in Las Vegas; it just might win the whole thing.

What it means is what others have said. Dr. Jeckell and Mr.Hyde. If we are motivated we can win the tournament. If we aren’t then NIT.

Nice perspective and analysis. thanks
Jeff

I have to smile every time I look at the WCC efficiency stats.

Can you elaborate a little more on those “efficiency stats”?

BYU is #1 in defense? How are those stats calculated? According to SG… every team in the conference has some awesome defensive game plan they have prepared to stop BYU’s offense… you know, like San Francisco who held BYU to 114 points in their last game.

By efficiency stats I was referring to tempo free stats

On offense per possession BYU scores second most.
BYU runs the fastest tempo offense in the league not surprising since it is back in the top ten in the nation on tempo.

not tempo free but still enlightening is the NCAA team scoring margin.
BYU is outscoring opponents by an average of 12.2 points per game.
17th best in the country.
St Mary’s has a larger team scoring margin…but as we all know it is boosted by spending so much time at home and playing such a weak schedule. In conference BYU easily has the highest per possession and per game scoring margin.
Without the horrible losses to Portland, Pacific, and Harvard. even with a weak WCC BYU would be looking at the normal at-large bid this year.

Instead…as implicit in what Coach Rose said this morning on SportsNation. BYU has to win the tournament to go dancing. The same almost certainly holds true for Gonzaga, perhaps slightly less so for SMC.

I think 2 teams will go from the WCC. And don’t expect Jim to understand that with the type of offense we run that other conference teams devise their defense to stop penetration and extend their defenses outwards. When BYU isn’t scoring well, any of those teams can win. SD almost did in the first game. Others have made it difficult to score and especially off of assists. We simply got hot in that 114 game Jim fixates on. If we were shooting poorly at a 35% clip we may have lost that game.
Back in the 60’s when UCLA dominated, teams devised slow down defenses in an attempt to stay in the games. Today, teams devise defenses to slow us down. Sometimes it works.

I forgot to mention some of BYU’s other offensive outputs that sort of indicate the ineffectiveness of the wcc defenses that have tried to stop them.

St. Mary’s did okay but they typically play a slow, controlled tempo. Gonzaga held BYU to 69 but they lost the game so… you can pretty much gather from these high offensive outputs that the wcc teams have not been effective with their defensive schemes trying to stop BYU. One thing to remember Harold is that the game also plays with a shot clock so there is typically more scoring in today’s game. Back in the day of yesteryear the best defense was often no offense. They would hold the ball for extended periods of time in an attempt to frustrate the opponent.

There are a lot of tactics used today that can really frustrate an opponent. It’s kind of interesting to watch…

Just be glad that we don’t see anymore of this UNC 4 corners of Dean Smith. That was some boring stuff they did.