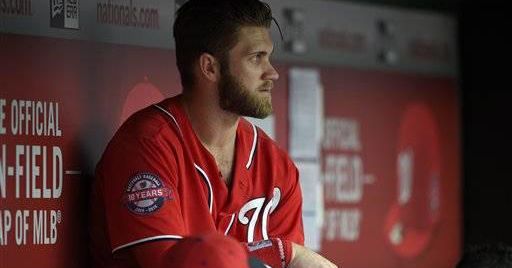 Washington Nationals Slugger Bryce Harper may be a Mormon, but he doesn't care too much for the BYU. Former Ute receiver Steve Smith surprises Baltimore Ravens fans, and a run down of local college football stories.

Some fans think that if you are LDS, you SHOULD love BYU…

Some on this board believe that…

That is why I support and love BYU, because it represents the church I am a member of. Are there things about BYU that drive me absolutely crazy sometimes? Yes… but that doesn’t mean I hate BYU.

Members of the church who “hate” BYU are idiots, plain and simple.

Missionaries - Some missionaries I dislike a lot because they seem to do more damage than good… Just had two in my ward that got transferred recently…
Temples - never
General Authorities - It depends… If they are doing their callings, Never… if they are doing anything else… possible.
Book of Mormon - never
Mormon Tabernacle Choir - Can’t stand to listen to them, not my type of music.
BYU ??? depends on the day and if we lost because of a coaches inability to adjust.
Pioneers - Never
Joseph Smith - Never
Relief Society, Primary, - Hate primary with an extreme passion along with Sunday School
etc…

Not sure why you dislike my comment and I don’t understand why you would think it is over the top. Your answers helped clarify the point I was making, so I thank you for that.

That is why I wish Bryce Harper would clarify a blanket statement like “I hate BYU”. Please tell us why Bryce… and then maybe we can put the comment in perspective.

So “dislike” what I wrote all you want, it doesn’t bother me in the least.

I believe his problem was specifically with this comment…

Members of the church who “hate” BYU are idiots, plain and simple.

I liked your posted, other than the last comment too.

Good post Jim Hawks. I was very surprised by the Bryce Harper comments about BYU. Is he even from Utah, and if so, is he a Utah YEWTS fan. Or is it USU? Or is it that he is a very young, very immature babied super athlete who has more physical skills and talents and more money than he has brains? I don’t know, any answers, anybody?

Harper is neither from Utah or a Utah/USU fan…

If you want to compare, he is like a current Jim McMahon personality… Brash, opinionated and a hot headed… I don’t like him for the simple reason of the whole “I am entitled” mentality.

I know a lot of LDS athletes who put BYU down lower on their list because of the attitude of some BYU students/fans that they have interacted with.
Personally I dislike the whole “BYU is God’s university” bull crap… I think that is fans who have this view also have an inferiority complex and not confident in the purpose of the school.

Even President Hinckley has told students to go colleges closer to their homes and NOT BYU.

Pretty thorough list Jim. I don’t hate any University but there are a few fans of certain post secondary institutions that unlikely have even been inside any post-secondary institution. I too love all on your list. Floyd’s tongue is so firmly imbedded in his cheek he better be very careful not to bite it completely OFF.

I have seen the damage to friends kids who are good kids, went to BYU and came home crushed by some students who thought the kid was “not worthy” of being at BYU.

I love the University as a learning institution, they do give a unique environment for people to learn… however, some the students actions distracts from that environment, which can cause big problems for children who may not know how to deal with it.

I had a chance to go to BYU, but because of some computer problems, I ended up at USU… which was great… because I met people there that convinced me that going on my mission was best for me to do (my family was not exactly happy about that decision).

I think the same could happen at BYU, but from my personal interaction with students there over the past 40 years… I don’t know if it happens often. Personal opinion.

So Floyd, I get your point…however given there are knuckleheads everywhere. Worse…some are downright idiots anywhere you look. We all gotta make the choices that work best for our own situation or for our college-bound sons/daughters. I am convinced there is more evil in Provo than there is in Logan. The university located there is not the reason why I feel as I do. Simply, I am convinced that being a bit out of the way makes Logan less susceptible to sleaze, drugs, rape, abduction, murder etc. Right on I-15 makes Provo a target of all the evil that has been proven to flow on major thoroughfares.