I can hardly wait for the ride. 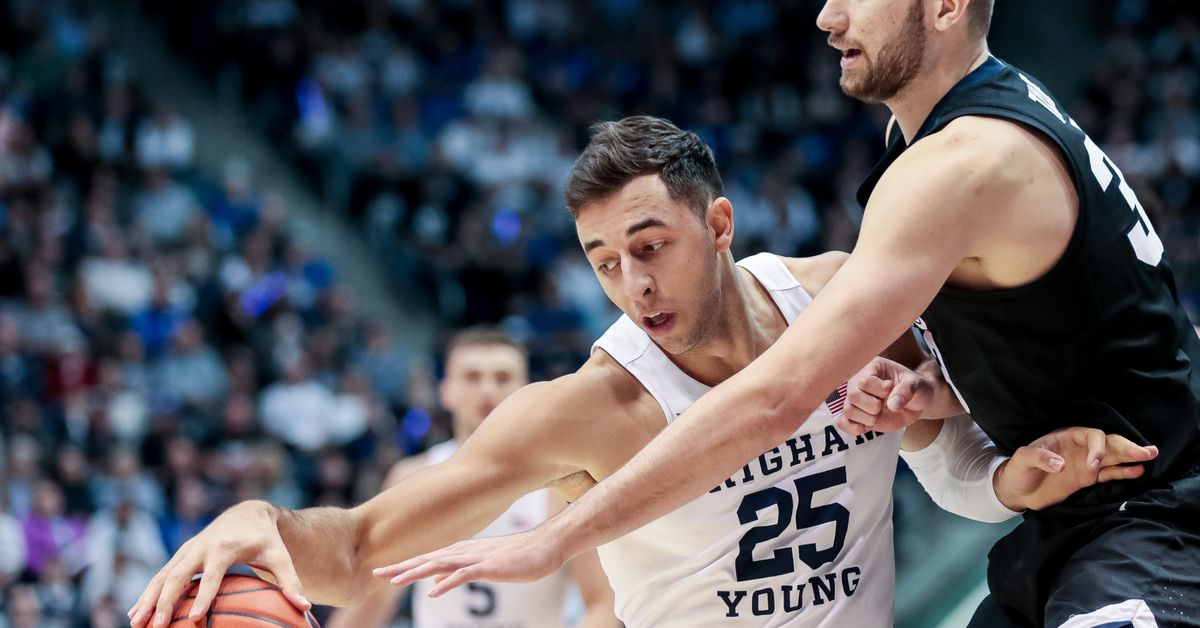 Why BYU’s basketball depth this season could be described as ‘every...

Right now, coach Mark Pope is trying to determine which combinations play best together and which rotations to use in various situations.


“I’d like to keep this rotation as big as we possibly can,” Pope said. “I’d like to stress our guys enough on the court that 20-24 minutes is as much as they can handle. That would be the ideal situation.”

My fantasy would be BYU playing LMU 90 style ball only with better 3 pt shooting.
Kentucky 96 wouldn’t be bad either…a 10 player rotation with most players most nights in the 20 minute range…

The point is still questionable in my mind. We have one good point. But whose ready to spell him?

To quote a certain coach named Mark Pope, “I’ve never had a bench this deep.”
Though he is prone to a bit of hyperbole, I doubt that he shares your vision.
AB, BA, Wade, Erickson, and of course Connor Harding who spent a limited time at point last year and has been mentioned by Pope numerous times as a potential point this off-season.

Only one is a true point guard…

Both AB and BA have spent more time on the floor as “shooting” guards than at point.

BA was a part time starter in the Big12, while AB was barely getting playing time in the Pac12.

Haarms got solid time in the Big10, not a bad foundation for the only seniors on the squad.

But 10 maybe 12 players in the regular rotation this year.

BA got plenty of time at Utah Tech. He’s quick and a definite point guard. Can he shoot? That’s what they say. But we have plenty of shooters. We need penetrators who can dish and get to the rim quickly. That’s BA.

If you bother to go look at the stats from Utah Valley last year you will see that most of the time BA was opn the floor he was not at point. TJ Washington was Madsen’s choice. BA got plenty of time on the floor just not primarily at point.

Ericsson is a true PG and ready. Dunked over Bol Bol. Go back and look at what I posted about him a year ago

I fully expect Erickson to be the full time starting PG next year.

The team is loaded and barring Pope bringing in a senior transfer, well with the new rule, edit that to say a top quality experienced PG, right now Erickson looks like the future of the PG position.

The Other Top 25 Preseason Rankings: No. 17 BYU Cougars

BYU will be Gonzaga’s top challenger in the WCC

Nice breakdown of the team this year. Probably the best review I’ve seen outside of TheAthletic back in July.

Lohner looks like he can dunk too. And incidentally, his boast about a 40 inch jump, might not have been from a standing start but looks to be pretty close to accurate.

Pope has mused openly about having players go on a turnstile with three minute substitutions, and playing faster, with no downtime between play, about possibly having a 12 man rotation. If he can do it this will be the funnest BYU team to watch since 73, 81, or possibly 88, Chatman, Haws, Smith et al shot better than 45% from three.
Wish I could find some video of the Stan Watts teams that ran other teams off the floor all the way to the national championship games.

Ready to roll at every position. only Covid will derail this train.

Thanks Harold–this was a great read. I think that a primary reason for BYU’s outlandish 3pt % last year is POPE–he convinced EVERYONE on the team to play for each other. We had hundreds of 3pt attempts last year that were wide open because a guy with a good look made the extra pass to a guy with a great look. I think we will see the same from every Mark Pope team at BYU. Even with all our bigs and a new focus on points in the paint, I think that our team this year will again be very unselfish and surprise people by again being an excellent 3pt % shooting team.

I think we will see the same from every Mark Pope team at BYU. 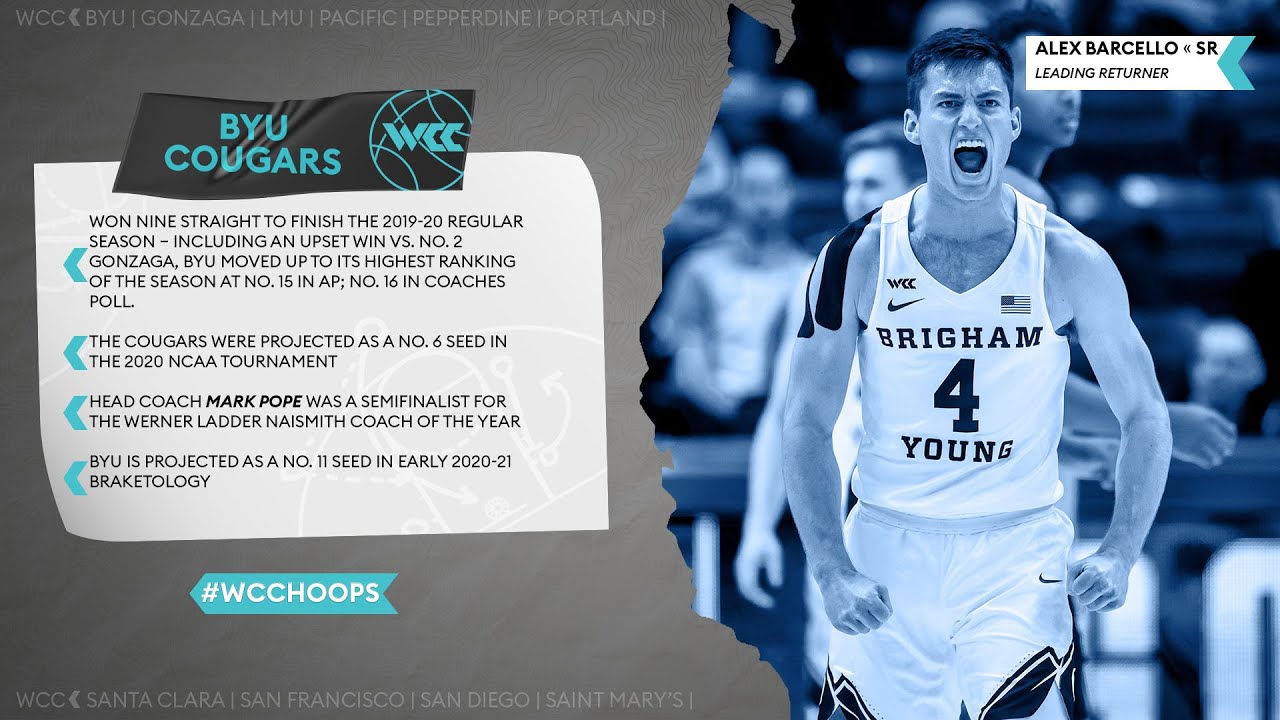 Pope says with the new team “good looks in the backcourt are off the chart.”
last year the team shot the fifth best 3 pt pctg in byu bball history, to get to the top they need to hit better than 45%

Wish I could find some video of the Stan Watts teams that ran other teams off the floor all the way to the national championship games.

I grew up watching those teams when I was in High School. I have tried to find video of some of those games but came up empty. I know a lot of games were on regional and local TV in the late 60s and early seventies when Stan Watts coached. You would think the University may have some old films somewhere but they may figure there aren’t many people around anymore who would be interested. I saw a number of Cosic games in person in 72-73 when Glenn Potter coached him after Watts retired but there is very little video remaining of him. For my money he was the most entertaining BYU player ever.

Pope says with the new team “good looks in the backcourt are off the chart.”
last year the team shot the fifth best 3 pt pctg in byu bball history, to get to the top they need to hit better than 45%

thanks Harold for posting some great videos.

I don’t think BYU has to hit 45% from 3. That team last year is long gone, that lead the nation in 3 pt % and I think they were in the low 40s. That 2019 team had to hit 3s because we had such a small inside presence. We had to make up all the lost rebounding and possessions. This 2020 year, BYU is massive, like top 5 team massive. Haarms and Howard are massive, then we have 4 others guys in the 6’8 range. We are so big that our starter, Lee is perhaps our 4th best big man.
The key to BYU wins is to get a lead and then go big and just kill teams inside.

The downside is: BYU lost 64% of its scoring. So here is a rundown of where our points will come from.

bench
Harward 12 (I think Harward will be the starter over Lee eventually)
Baxter 8
Erickson 7
Knell 6
George/Lohner/Wade/Spencer 10
Lowell when healthy could be our team’s high scorer.
Warr: redshirt
Pope’s challenge: Most teams end up with a rotation of 7-9 guys. Which means you are going to redshirt some guys or they transfer.

As a transfer to BYU from a small NCAA Division II basketball program, Brandon Warr knows the odds are against him.