So if my understanding is correct the following players will not be here next year. 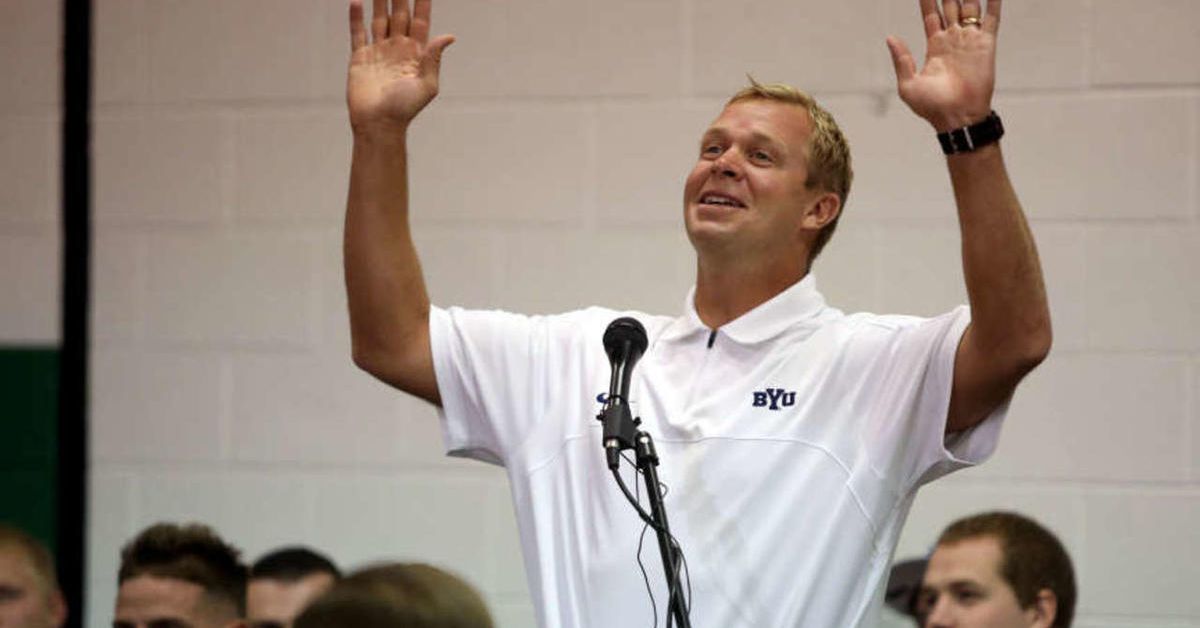 Bronco Mendenhall addressed numerous topics such as the Big 12, coaching changes involving two of his best friends in the profession, his level of interest in the Oregon State job, transfers, and losing his director of football operations.

Trent Trammel - graduates and will play final year somewhere else.
Dylan Collie - Hawaii
Leavitt - USU.
Braden Kearsley - indicated he wants to transfer, but he has some academic issues that need to be resolved before Bronco will release him…

hmmm… 3 of the 4 were starters or major contributors… what does that say?

Goes both ways. I’m sure we will get some transfers like we did last year too. So, unless there is a mass exodus, there is no controversy here. Bronco will be the coach next year and I’m sure Anae will be back too. As far as the DC, that may change. But, I doubt that too. Who else is out there to replace them? Not many.

Those who want Detmer as the OC next year, what are his coaching credentials in college? No better than what we had before Anae.

BYU is apt to get more people leaving and coming in because of their nature of being a private religious school with rather a strict code of conduct compared to state schools. They lose players, but they also pick up players, often when returning from missions with a different outlook on life. Don’t really see a problem here!

Trammel has never played a down at BYU so it doesn’t appear that will be a loss of any kind. Collie was supposed to be a good recruit, and has a great pedigree, but BYU has plenty of good experienced receivers coming back. Kearsley started a lot so that hurt and Leavitt started a lot and BYU loses quite a few guys in the secondary so his loss hurts. Things were shaping up pretty good at safety with him and Nacua and now safety looks really shaky with Leavitt leaving and Nacua’s situation up in the air after his participation in the brawl.

It is troubling that two who appeared to be almost certain starters for two more years would opt to leave. The question is whether they were having issues with coaches or personal issues. If Kearsly was having academic issues it makes sense he would want to leave for someplace where he would have an easier go of it.

That’s ususally the reason. Some players think the grass will be greener somewhere else when the problem is them. We will probably bring in some JC players to replace them. I’m not worried. This sort of thing goes on every year.

Detmer had a long career in the NFL and while he was not in the starting rotation the experience he gained was huge. Worth a try.

Even with the big step backwards in scheudling (give me games), we suffered humiliation in 2014.
It is easy to forgive, when scheduling is competitive. It is not so easy with such rediculus (give me) games.

When we schedule Patsies just for an automatic win, it would be better for the fans, if the coaches just tell us we won those games without showing us how strong we are against those Patsies on the field.

(NOT LONG AGO, it was announced that we were blowing all of that decent schedule by putting in a division 2., or was it division 3 or perhaps division 4 team. Since there was so much screaming and rebelling because of it, I have not heard that [ team (?) ] mentioned since that time and I do not see it on the schedule. Thank you. Thank you and again thank you if you took that team off the schedule.

Yes, I think that we should keep our full coaching staff for the 2015 season and let them work hard to prove that they are not too tired to practice, to tired to coach, and to tired to work hard the full season without giving themselves, and their assistants and therefore, the players, time off before the final seconds of the bowl game in the post 2015 season.

Family outtings, and time to heal is best after the final game of the post season. If one needs to heal, that one player should take time off and use his replacement or back up to continue. Don’t give the full team time off until after the season.

If the coaches are too tired, to work the full season, without taking time off and blaming that time off onto the needs of the team, than perhaps they should find a high school to teach/coach in where that high school has no asperations for their players to be discovered on the University level.

After the final game of the 2015 season has been played, and the team has done well, considering the tougher strength of schedule and winning at least half of the four toughest teams on the schedule, than we should all get behind our coaches and give them all the praise they deserve and perhaps an extended contract and/or pay raise.

On the other hand, if they are too tired to work the full schedule without taking time off, than perhaps they would be happier in coaching in a small rurla high school.

Every team schedules inferior teams(check SEC scheduling). It’s especially tough on an independent when teams cancel and you are trying to fill that date. Granted they become uninteresting and I would think twice about wasting my money to attend, but I would probably watch for free on TV. Injuries happen to all teams, but some teams have such tremendous depth that they can run their 3rd string QB out there and get in the national championship. I don’t think scheduling division II teams hurt a conference like the SEC teams as much as they do BYU because we are trying to prove that we belong while P5 teams are already there and aren’t trying to prove anything. We scored enough points to win most all our games, we just couldn’t stop anyone. 2015 wil be an interesting year with, like you said a great schedule and Bronco will be responsible for calling defensive plays so we will see what happens. Lastly check Boise State’s strength of schedule compared to BYU and yet there they are with a 3-0 Fiesta Bowl record. Not really disagreeing with anything you are saying, but generally just winning all your games takes care of everything.

I lke your post for the most part, however, I must disagree with one sentence that you made. you said:

“but generally just winning all your games takes care of everything”

I must remind you, that TCU was ranked #3 in the Nation this past season. Because Baylor was the only team to beat TCU, the Big 12 crowned each of them, #3 TCU and Baylor, as co- champions of the Big 12.

In the play off game that #5 Ohio State had, which was vs. a quality P5 team, they jumped over both #3 TCU and Baylor, co-champions of the Big 12.

#5 Ohio State, a lower ranked team, was able to jump over #3 TCU and Baylor, because of the strength of schedule.

TCU and Baylor in their last games, played weaker teams so they missed out. Just winning was not enough. The other team won a tougher schedule so they prevailed, while the higher ranked team winning a lesser schedule was left out.

Yep Ronald_Uharriet you are right. I don’t know too many teams with the national clout to pull off that one. It was totally a sham to me even though Ohio State, obviously, was a great team. They lost at home to an unranked team, whereas TCU lost on the road barely to Baylor the eventual 5th ranked team. I don’t care about conference championships-if it was Notre Dame, I doubt OSU jumps over them. So in this case, just win baby, didn’t apply to TCU or Baylor

While “just win baby” surely doesn’t cure “everything” it sure helps, in a major way, but has to be several seasons running in a resume building manner. I realize that Ohio State has a better “cache” than either TCU or Baylor, particularly from a business and TV perspective. One thing we have to keep in mind is that CFB is now all about BIG business. For BYU is it not about winning big for one season or two or three. It’s about winning big for 6 or 7 or 8+ years. And if any stumbles, they have to be small stumbles and then winning big again and again. Sustained high performance. The problem is that I doubt the Y could achieve such a long term high performance due to several factors including lack of depth of quality players to sustain the team through injuries.