BEFORE I START, PLEASE, PLEASE, PLEASE REC LEAGUE MAKE YOUR REFS WATCH THIS FILM AND REALIZE THAT WE LOVE BLOCKED SHOTS, NO TOUCH FOULS OFF THE BALL, AND GUYS RUNNING AND GUNNING INSTEAD OF SHOOTING 50 FTS IN A GAME. THIS GAME WAS AN EXAMPLE OF GOOD REFS LETTING GUYS GET AFTER IT, QUITE DIFFERENT THAN THE EGOMANIAC SMALL MAN COMPLEX GUYS DOING REC LEAGUE GAMES.

As accurate as your recap is, it amazes me BYU still could have won this game. I was a bit dumbfounded to see how quickly they came to within four in the second half. But then, I shake my head when Valpo made some key threes; one in the first half with one second on the clock and then the last three. BYU? Those type threes never drop for them. I agree with you. It was fun watching four more games.

We didn’t really earn a win tonight. However the one missed call I would gripe about was the missed goal tending call in the first half. That said, we missed a ton of layups tonight, as we have in each loss this season.

I agree. That goal tend was easy to see and the referee was looking right at it.
I agree also that layups have been our Achilles heel all year. That and FT.
The type of turnovers tonight hurt a lot too.

Yep. That and missed layups.

The refs called a lot of fouls in the 1st half but did better in the second half.

Nice recap, TLarimer. I enjoyed most of the season with these guys. The team will miss KC’s leadership and skills next year–hopefully the young guys will fill in nicely. Now, looking forward to Football.

dew: they won’t and they love too much for Zags The American WCC Team.

dew: True. but I wonder we should have watch a little more on how other horizon team beat this team twice. Maybe if we had our guys held on the ball a little longer toward the rim to score and draw a foul.

tlarimer: 4.The first 15 minutes was the worst I have ever seen BYU play, ever, in any game in my life.

tlarimer: 5.Seljaas had, by far, his worst game since the first weeks of the season.

dew: go easy on this Elder Seljaas, he’s going on a mission. He did fine this season. At least he got the feel in a big venue at the MSG and will be better prepare when he is done with his mission.

tlarimer: 6. Fischer, who has been great in the clutch lately, got way too selfish way too often in this game.

dew: He has gotten better but. Well he is done and moving on enough about him.

tlarimer: 7.Our execution–on BOTH ends, in the last two minutes was just simply abysmal. We deserved to lose this one.

dew: could of been worse and too bad about KC health when he lost 12 pounds. One time someone said 11 lbs before the Valpro game and last night ksl said 14 lbs. KC is a stud and always ready to play except some mistakes. KC will be missed and wish him well on his next level, NBA, D-League or Over Seas.

tlarimer: 8. …Too bad when Fischer was dribbling into trouble at the end he didn’t SEE Emery spotted up for an open three on the left wing–a deep one, but an open one.

dew: Fischer has tunnel vision and some ADHD. It’s over about Fischer, enough about him. Wish him well.

tlarimer: 9. I can’t wait for three more years of Emery–he got some tough luck at the rim tonight, but you can see how his athleticism shines out there.

dew: Nick is the man and not so bad on his first year. I am looking forward for more and he can shoot FTs. TJ, same about him along many others coming back. Free Throws % will go up higher for several years and lazy/sloppy passes (less TO’s) will be gone.

tlarimer: 10.THANK YOU NIT FOR GIVING US 4 EXTRA GAMES TO WATCH!!

dew: PLEASE, somebody from P5 take us NOW so we don’t see wcc rec league in our backyard! Their small gyms sure make us look bad & small!

Dew:
I don’t mean to be hard on Elder Seljaas. I thought he improved as much as anyone on the team this year. But last night he was just off–1-6 from deep, 0-1 from the stripe missing the front end of a 1 and 1, only 2 RB in 32 minutes, and committed 4 fouls in a game where the refs were really letting guys play. He did have a couple very nice blocks, but he he just didn’t produce. I think he will be a HUGE STAR by the time he is done. And my daughter knows all the guys on the team and says Seljaas is one of the nicest, most humble kids you will ever meet, so I root for him at all times.

I also agree with you on our bigs–none of them are good at “getting guys in the air” in the paint. Kaufusi’s athleticism is off the charts and I think he has it in him to become a double-double machine by the time he’s done. Next year will be a great year for him playing alongside Mika, a true back-to-the-basket future NBA post player.

PS: When we were in man, KC did an AWESOME, and I mean AWESOME job on Peters. And when they would screen and force us to switch, Emery also did a great job on him. Peters only hurt us with open corner 3s against our zone. Well done by KC and Emery!!! 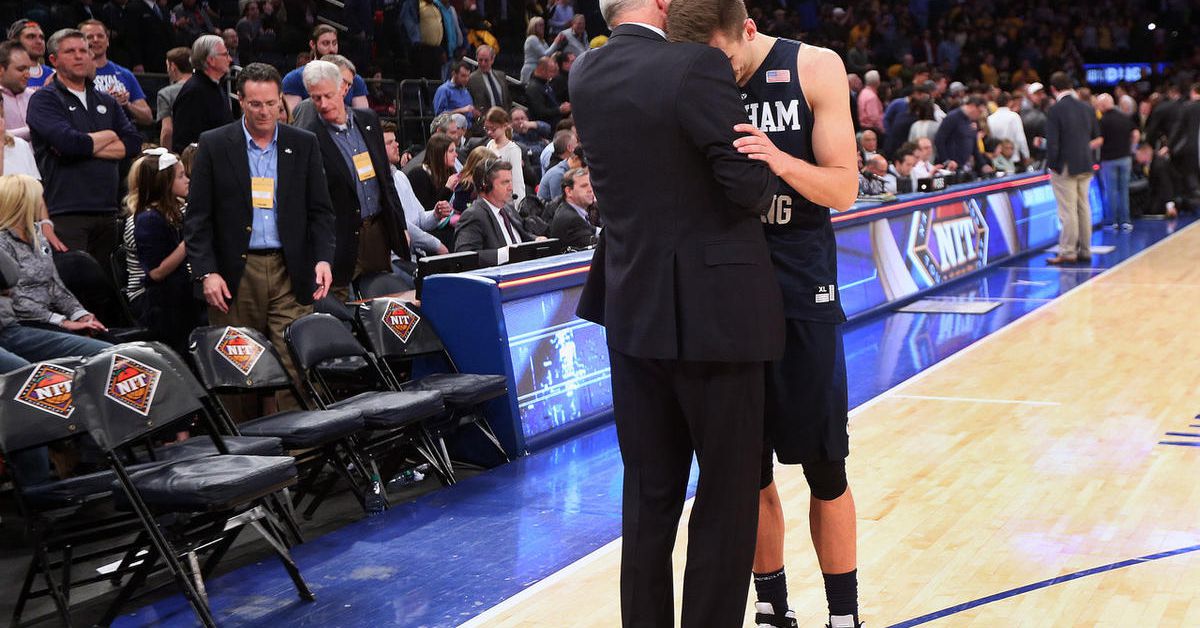 In last week’s NIT quarterfinal win over Creighton, BYU senior guard Kyle Collinsworth was seriously hampered by the flu. The illness took its toll, as he lost 12 pounds. He worked hard to get his energy back, but he wasn't at full strength Tuesday.

From KC: In his final game in a Cougar uniform, Collinsworth wasn’t at full strength.

“My legs were a little heavy, to be honest,” he said. “I wasn’t very springy.”

That was visible at the beginning of the game when he made some silly turnovers. But, that didn’t lose the game. Missed layups and FTs lost the game, again…

Turnovers in the first half hurt. But, the continued layup problems and free throws made the difference.

Pretty accurate game summary. Interesting that grasshopper agrees with pretty much everything you say but just can’t bring himself to admit the obvious when one of the players is selfisch. No matter, the rest of us saw it. KC is great but he has his moments when he commits some very silly turnovers… jumping in the air with nowhere to go, dribbling too much and losing the ball, etc.

I was surprised they came back but it was KC that basically engineered that. Fischer made some good shots, as he does when he is patient and unselfish. There are times when I wish the guards wouldn’t force it inside. Everyone talks about missed layups and that is the result a lot of the time when they force it. I thought they played okay, terrible in the first half balanced by a good second half.

Wait till next year though… BYU will be better next year.