How in the world did we beat Wisconsin last year? They looked amazing last night.

BSU is for real. To play in Tallahassee in 100 degree humidity and watch FSU gas out in the 4th. BSU not only took it to FSU in the 2nd, they out manned them, Bigger hits, bigger plays. BSU has a very good fr. QB, 2 stud RBs and THICK lines on both side of the ball. Lots of big play players on that team. Best game of the year so far.

Wash looks good in the 1st

Oh and for all those that think BYU could of hung with Utah even if we hadn’t given them 2 free TDs, think again. Witt never had to use his playbook. Wilson needs to watch film on himself…a lot.

How do you know Witt didn’t use his playbook? And, yes, no pick 6’s and we win.

How do you figure? Do the math…

We score two touchdowns and they don’t. Pretty simple.

One thing that was clear to me is the lack of mental focus… How many good plays did we have on both sides of the ball and then a BYU player does something “Stupid”?

I did hear they are benching Mandel this week after not one, not two, but THREE PI’s

Math was never Scott’s strong point, was it Jim?

Let me explain it then. A touchdown and extra point is 7 points. So, first subtract 14 points from Utah. Look on the field and note we were moving the ball and may have kicked a couple of field goals or made a touchdown or two. Now count.
Also, the fumble was at our 20. Take that easy score away too and we win by maybe 18 or so.

More observations. Tenn’s QB was getting throttled by the QB coach after every series. Visibly yelling, “what are you doing”, Why didn’t you run the play". It was mostly Ga St. getting pressure on him. Prediction: If BYU can’t get any pass rush or if we play the 3-4 when everyone else in the world are putting up to 6 and 7 on the line…we gonna lose.

USC’s QB tore a ACL and Meniscus and is out for the year. The new QB is unproven. BYU should be able to beat them at home.

If by chance BYU can expose Tenn as Ga St did and we get by USC, This could be a good year after all.

USU- is a tossup.

BYU is a possible 9-3 but we always lose to someone is should not of lost to, maybe 2 teams. 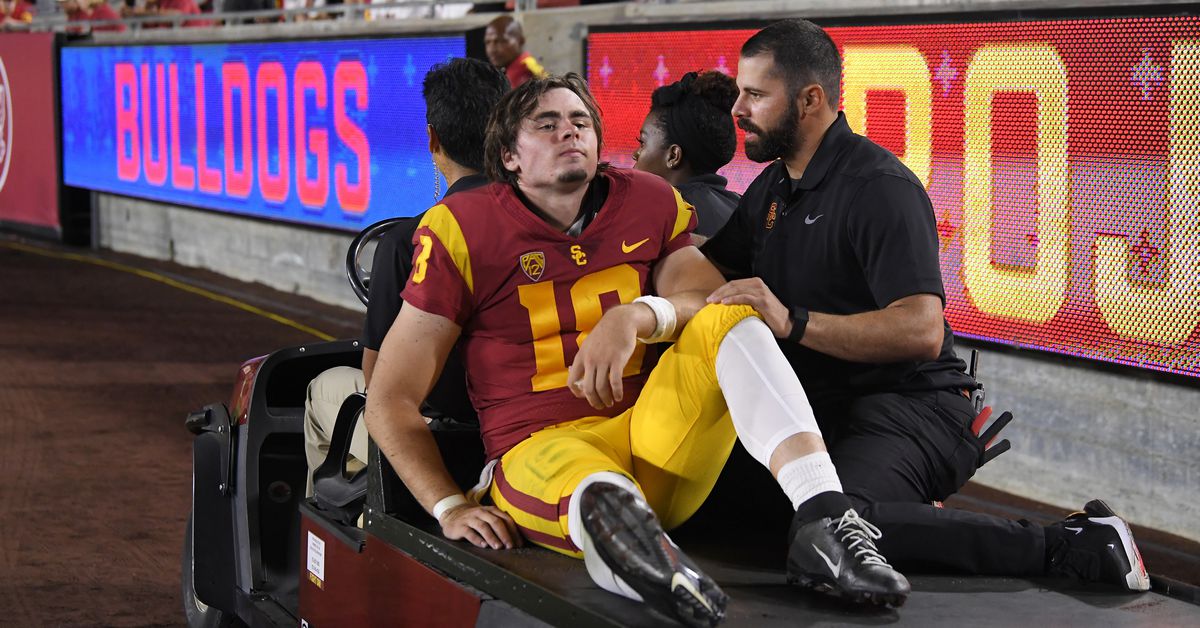 USC quarterback J.T. Daniels out for season with knee injury; Trojans to face...

Daniels will miss the rest of the season after tearing a ligament and the meniscus in his right knee.

I agree with you, Chris. It’s way too early to expect a down season for BYU based on their getting steam-rolled by a very good Utah team. Yes, it leaves a horrible taste in my mouth to declare Utah very good, but they are. They have risen since joining the PAC12, and we have not. As much as I can’t stand the gloating of some of their fans, and the demeanor of their coach, I have to admit they are very good.

However, my gut is saying BYU is going to rise this next weekend against an SEC team and show their potential. I see a 7-10 point win coming. 24-17 or better, on the shoulders of Wilson, Williams, and Bushman. Yes, I’ve got the blue goggles on, but we will be ready for this one.

If the Y reallyemphasized text have an excellent RB in Williams. If so run him 20 to 25 time, or more, to see if Tenn. can handle him and if our O line is any good.

I was disappointed he wasn’t used more in the 1st half. 2nd half is understandable after his fumble and then the pick 6 and we never got the ball back.