What are the expectations of Jaren Hall?

What do we expect from Hall’s first start this Saturday? Will he help the offense score more or less?

I think people will be surprised at just how well Hall does.
He has good arm strength, and is a good passer, but he is also a good scrambler if he gets into trouble. He is 6-1 and around 205 lbs. so he is built to take a hit.

The real Issue in my mind is: can the O-line protect him? If he is continuously running for his life, not sure who could do good.

One the things that I noticed with Wilson was his lack of learning from his mistakes, always trying to thread the needle (ends up as Pic 6’s), almost a cockiness to him “winning” the game.

He still seemed to play like a very good freshman. In fact, he’s only started like 8 games. So, he’s still like a freshman.
I think threading the needle is necessary. What he still was lacking is understanding the defense which dictates when to attempt to thread the needle based on where the defense is. He will get better at that unless Hall makes huge moves. Remember, Wilson did beat 2 P-5 teams including USC.

He also lost the Utah game because of his pic-6 throws and lost to Toledo for the same reason.

So just because he beat two mediocre P-5 teams does not mean much to me.

Nothing of importance means anything to you. The glass is half full with you. Both teams were much more deeply talented and you know it. The difference then was our coaching

No, it was Wilson. Wilson was still a New QB. Get over it.

GRANTED that Wilson has only started a few games and he missed spring practices, I have yet to see anything from him that says he is a great QB. Based on what I have seen I would say he is a good QB. He might rise to be a great QB in the future, however.

If Hall is protected he will do all right. To win the OL will have to give the RBs some lances to run to. The defense has to stiffen up. If those 3 things happen in good measure the Y has a good chance to win.

Good points about Wilson in 2019 Floyd E. To me it seemed that Wilson was rarely left open to run like he did like in 2018. Is it conservative coaching, the OC being afraid Wilson would get hurt. It looks like Wilson hurt himself trying to tackle a player from Toledo.

Pay attention. Thawk also said the same thing. At the end of the USC game, Wilson hurt his hip flexor. Up to that point, Wilson was running very well racking up yardage. But in the two following games, he only tried to run when absolutely necessary. And, in the Washington game he was not stepping into his passes. He was arm slinging the ball. The coaches put the stop on him running for that reason. Not because they were conservative.

This may answer some questions about Hall and his abilities: 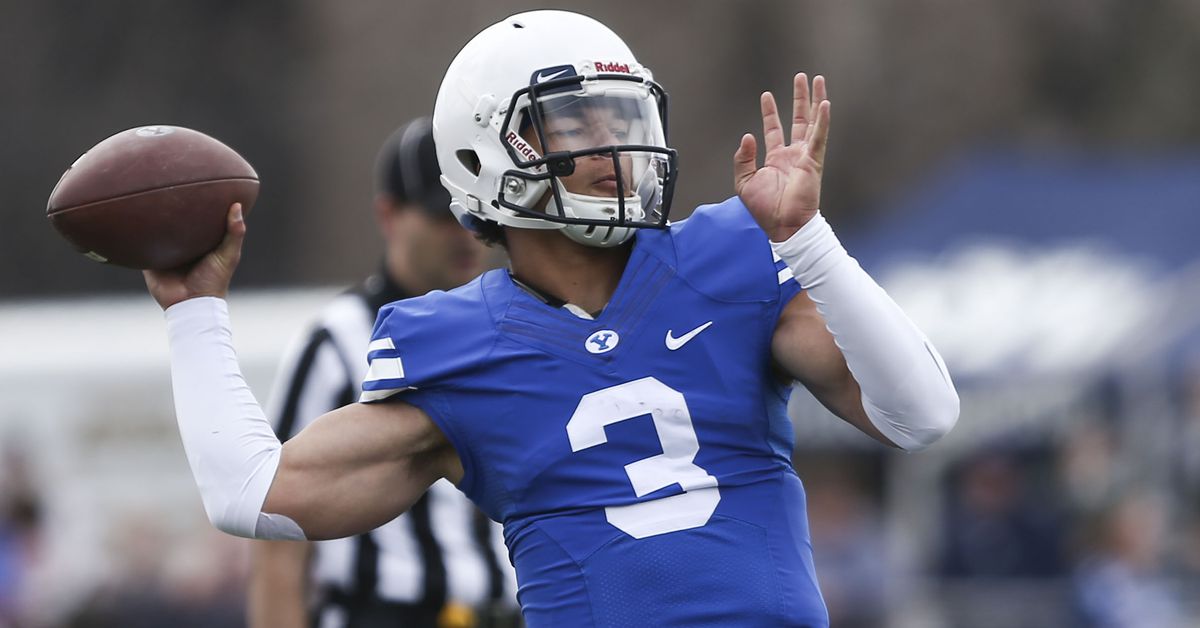 Seriously Scott, you need to stop cherry picking one event and saying it caused something. The fact of the matter is the O-line this year thought they were better than they were (according to comments made by their coach (Eric Mateos)) and Wilson was not getting protected like he should and had to scramble to even run a play. In fact all his pic-6’s comes from being pressured by the defense.

I love how you think you know what you are talking about when you actually have no clue. According to the coaches, Wilson was getting pressure from the Washington defense all night long because the O-line was not protecting him. It is kind of hard to “step into your throw” when you are getting pressured.

And Wilson didn’t run at all. When he was pressured by Utah, Tennessee and USC he ran. In fact, there were QB keeper plays for him. But, for the past two games, there wasn’t. He didn’t run. Escaping the rush and QB keepers didn’t happen in the Washington or Toledo game. Just look at his rushing numbers.
Back to the Washington, you are being myopic about the offensive line. Go back and watch his throwing motion and then watch during the USC game. Completely different. I would think an eagle eye umpire could see this. I’ll also yield back to Thawk’s post about the hip flexor. Stops you from running. Stops you from stepping into your throws.
Stop looking at one thing. It was obvious that the coach told him to stay in the pocket and not run. You live there and are all knowing and seeing with the coaches. Ask them.

Is everyone forgetting his performace in last yeast Potato Bowl
WYCOWBOY

No, but look at the competition of the Potato bowl… was it really that great?

Not me. That would be you.