The BYU basketball recruiting roundup: Taking a look at the remarkable...

By: Jay Yeomans Published: March 16, 2020 With the season now behind us, it is time to look at the new faces coming to the BYU program to see how they performed at the high school or junior college…

When Pope got the job, I was surprised when he signed Blaze Neld out of Utah County, because Blaze did not show me anything that popped. Then he got Barchellos, and that kid Pops, really pops. Now he has signed 4…

-Richie Sanders, I was like, “OK, not the top recruit from W Academy”. Now I’m like, “Duuuude”.

-Spencer Johnson, Good, real good but his brother (who is serving a Mish) signed with Oregon, world class and just maybe…

-Gideon Goerge, out of Africa, by way of NMJC, 4 years playing the game and FREAK athlete.

-Dallin Hall PG out of Fremont. This kid is a winner, wizard with the roc.

I appreciate the local insights. I was impressed with Hall’s highlights on Youtube. He’s 6’3" and dunks easily. Is he a Jackson Emery type?

I’d like to see us recruit overseas and find the next Luca (Mavs star)…well, after the world goes back to normal.

Talking about that, my daughter is in the Barcelona Spain mission and will come home this Friday a month early due to the quarantine of all missionaries in Spain. She’s bummed because she wanted to finish strong. But there’s no other good options so she will come back to Oregon. She’s definitely one of my favorite kids and I can’t wait to see her at the airport this Friday.

Glad to hear about your daughter, I would always travel to their mission and meet their people but now is deff. not the time

This Hall kid is a Point. What makes him special is his ability to involve others and yet he can go off when needed so he is closer to a Jimmer then a Jackson Emery.

isn’t it weird that as soon as I mention Blaze N. not fitting what I see as a BYU caliber kid, this pops up. 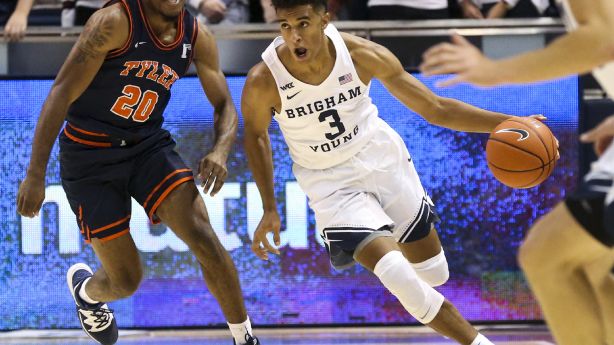 NCAA Transfer Tracker: BYU PG Blaze Nield could be on the move

With the cancellation of the NCAA Tournament, the news doesn't stop. In fact, the transfer portal started humming earlier than usual this year.

Just another player not wanting to have to compete hard for a starting position. We don’t need selfish players, right?

Blaze does have an awesome name. He must not have been that great if he couldn’t crack the rotation this year.

I’m looking forward to Barcello next year. Pope sure trusts him. Barcello was always in during crunch time and played a lot of minutes even though there were long stretches he didn’t do much on the court. Must be good defensively and have good ball-handling skills.

Blaze and J Wade are smallish and if you are small in D1, you better have some special skills. Jesse Wade is under 6’ and slow, deadeye shooter but he may retire because of his knee?. Blaze has no outside shot and is a ways from running the point and has entered the transfer portal.
other recruits:
1 Want to get excited, watch 6’3 Hunter Erickson’s highlight dunk over Boi Boi all 7’2 of him. explosive, most likely a shooting guard.
2 Spencer Johnson, 6’6 out of SLCC, also a shooting guard
3 Gideon George, OH MY GOODNESS 6’6 athlete.
4 6’11 Richard Harward Jr transfer from UVU, beast center
5 Wyatt Lowell, 6’10 also UVU transfer, good outside shot, play the 4
6 BYU is looking at 2 overseas point guards. Kerr Kriisa from Estonia and Omer Kucuk, point from Turkey.

Lots to look forward to in Year Two of the Pope era.

I love the scouting reports. Fish, you always come through.

Sounds like the future is bright for Pope’s boys in the coming years.

Talking about people on Cougarfan, where the heck is Jim Hawks? He used to comment all the time but he’s gone totally silent. Is he doing ok? Hopper may know as they are SoCal friends.

He’s pretty busy right now as a bishop. And, his job may be online or going on line.

Like the looks of the new recruits.
Went to the paperback book store and bought 12 books to keep me entertained until this mess clears up. WYCOWBOY

bought 12 books to keep me entertained until this mess clears up. WYCOWBOY

Pope is the real deal and I hope we keep him

Do you know why Matt Van Komen, out of Pleasant Grove by way of Coach Kry and the Utes, is not in the picture? Besides being from Utah Valley his mother played as a Cougar.

He put himself in the transfer portal last month. I don’t see where which school he wants to play for. As tall as he is will be nice to have him at BYU for 2021-22 season

Do you know why Matt Van Komen, out of Pleasant Grove by way of Coach Kry and the Utes, is not in the picture? Besides being from Utah Valley his mother played as a Cougar.

Van Komen is being talked about. Pope has interest. I have doubts about his frame holding up to D1 BBall. He has had corrective spinal surgery in the past to fix his posture.

Aren’t we pretty set with big guys these next couple of years between Lee, Baxter, the Utah Valley guy and a couple others? I hear the Utah Valley transfer who sat out this entire season is the real deal. Anyone know how good he is?

Anyone know how good he is?

both 6’10 Lowell from Gilbert, Az and 6’11 Harward of Orem played a year for Pope at UVCC. I have met them and watched them play. They are far more mobile then Lee and I expect Harward to start over Lee. Lowell has a dependable 3 (although Lee surprised up all with his 46% from 3)

Also newsworthy, Blaze Nell has entered the transfer portal and Jesse Wade will most likely retire from Basketball with his ailing knee.

I feel for Dalton Nixon, he exploded his game this year under the tutelage of Pope, as did Lee. All of our seniors deserve much better then this virus stoppage. It truly is heart breaking.

Tells us all just what Pope brings to the table. He retooled pedestrian players into impact players. It was stunning what Pope did with Nixon and Lee. I am excited to see what he can do with Baxter, and NBA body but mentally, just not even close to where he needs to be. This kid from Africa, George is soooooo raw and freak athlete. Then there’s Harding’s knee? We have the pieces to be good, we will just have to see 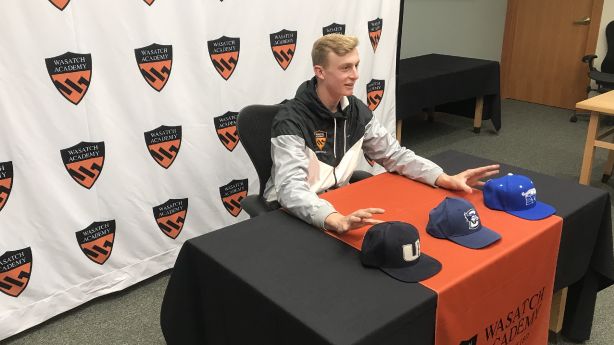 I will rank Pope’s 5 recruits:
Hall gets 4 stars, His 7.1 assists per game is mind boggling. Unlike other Mr. BBalls that Rose signed in the past, this kid is strong, durable, and score from anywhere.
Richie Saunders, 3 stars, Pure 6’5 shooter. The fact that this kid started for Wasatch Academy says a lot. Like Hall, he is 3 years away from making an impact at BYU.
Gidean Gearge: 3 stars, freak athlete, only 5 years of organized ball for this 6’6 Nigerian. Averaged 14 ppg- 8 rebs. He is going to play well above the rim. 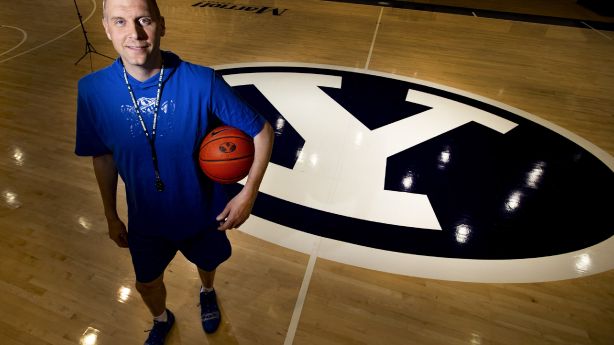 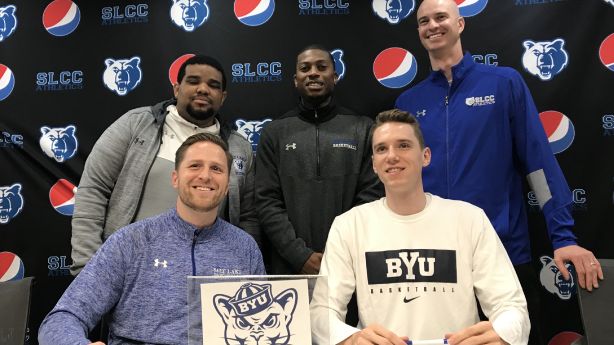 
Spencer Johnson, 3 stars. 6’5 RM, High IQ, knows how to get to the FT line. He has Harding type qualities. The big news is…could he lure his 6’11 Oregon signee brother to Provo?
Tripple, 2 stars. score 28 against Wasatch Academy. 6’8 with some good bball IQ. Slowish, skinny but as a walk on, he could surprise a lot of peeps.

“Congrats to Rocky Mountain senior Townsend Tripple, who will walk on with BYU basketball next season. The 6-8 wing planned to go on a mission to Argentina first. But the coronavirus put that on hold, and BYU invited him to join the team...

Pope is doing things right. He is rich with shooters, utility players and big men. Has 2 schoolies to solve the PG crisis.

The NBA coach I fish with tried to tell Blaze NOT to sign with BYU. Did not think he would get playing time with all the seniors on the team. What I saw was a kid NRFPT. not ready for prime time…Pope tried in several games to insert Blaze at the point and he looked lost out there.

IN my book, if you are undersized in D1, you better be blazing quick, be able to defend hard, have a GOOD outside shot. Blaze had one out of three.

Aren’t we pretty set with big guys these next couple of years between Lee, Baxter, the Utah Valley guy and a couple others? I hear the Utah Valley transfer who sat out this entire season is the real deal. Anyone know how good he is?

Now with 7’3 Matthew Haarm signing, what happens to Lee, Baxter?
This is Cre Cre