BYU has been killed in TOP the last 4 games. And it’s not because of our incredibly fast TD drives. It’s because 1) we intentionally concede yardage because we are too risk averse, and 2) we are TERRIBLE on 3rd down (for the same reason as #1). BYU is 91st in the NCAA in 3rd down defense, allowing a staggering 42% conversion rate. Baylor is 20th. That means Baylor stops teams on 3rd down, and BYU doesn’t.

We all know Sitake doesn’t care about TOP–and don’t tell me he does, or he would have made at least SOME defensive adjustments in the last month. He affirmatively schemes to concede time and yardage, hoping the other team screws up. So if BYU falls behind–to anyone–by 2 or more scores, it will be very VERY difficult to come back.

Baylor splits carries with two RBs who have combined for 1000 yards with both around 7ypc Ouch.
QB Bohanon completes 67% of his passes with 11TD and ZERO YES ZERO Ints. Smart and accurate, just like Bachmeier at BSU (still laughing that the former staff thought that clown who transferred to Utah was better than Bohannon).
Like BYU, Baylor spreads the ball around and has several excellent WR.
The Baylor OL has allowed a total of 6 sacks in 6 games.

This is a disciplined, talented offense. Slot receiver Estrada was hurt early but in the last two games has 10 catches for 180, and is the kind of guy who can feast under the soft zone.

It drives me bonkers–and frankly just isn’t fun to watch–but I just feel like Sitake is in “ride or die” mode, all-in with Tuiaki’s scheme. Like BSU, I think Baylor’s offense will have lots of space to run or pass underneath, and will be too good and too smart to screw up enough for BYU to win.

I’ll take BYU 38 - 24 for the same reasons and our offense will come alive more.

I hope you are right. I was wrong about both the Utah and BSU games, and hope I’m wrong on this one as well, but I just can’t see any logical way to pick BYU. I think this is the best QB, best WRs, and best RBs–by a MILE–that BYU will have seen this year.

Maybe it’ll rain and they will fumble several times

I was a little early with my post…Doug Robinson says the same thing, albeit much more articulately: 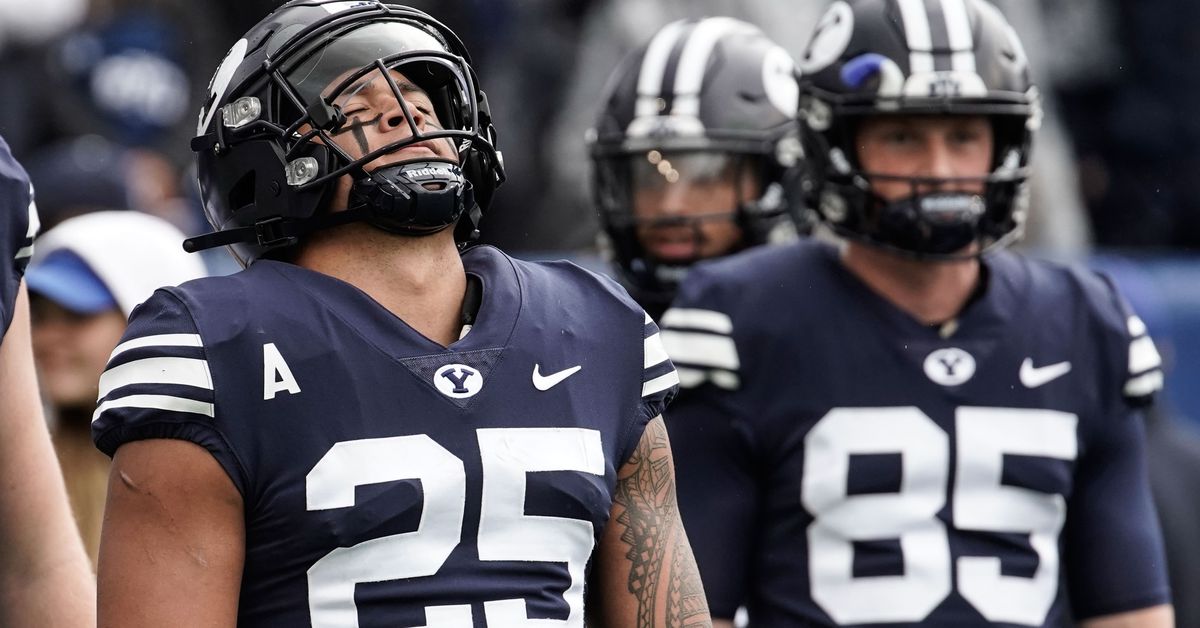 Don’t panic, Cougars. On second thought, go ahead and panic

For BYU, which was riding high until loss to Boise State, it could be tough sledding in the weeks ahead

If Hall can run, I like our chances, if not, it’ll be a long day

My prediction is Baylor 35 and BYU 17. Both tlarimer and Robinson make valid points. The only problem I see in my prediction is if Sitake feels like his back is against the proverbial wall, the team might rally. However, he now has more time on his contract and the Cougars would find it difficult to go into the B12 having fired Sitake. Based on all the glaring concerns I will let my prediction stand.

It’s always difficult to go to another team’s field and win when they are good. But, BYU has done this with Sataki. BYU has to play like they did against Utah and ASU. No mistakes even if it rains. We can’t be conservative. Hall has to run to help out Algiers. And, he has to find his tightends and get them the ball.

You have BYU scoring 31 against Baylor?

If they aren’t going to run Hall, I don’t think he should be in at all. He’s not good as a sole passer.

I suspect they are trying not to get him hurt again, so I don’t think he will be running much at all. That neutralizes him as a quarterback, in my view.

I would prefer Romney to Hall if he can’t run, but of course I haven’t heard how Romney’s concussion protocol is going… yep I expect a high scoring game, at least on Baylor’s part and hopefully BYU’s also. I believe Baylor has turf which will increase the speed dimension. I have yet to see BYU put a complete game together, maybe Saturday is the day!

I just see Baylor dominating the ball, getting ahead, and BYU not having enough firepower to come back from behind on the road. In fact I won’t trust BYU to come from 2 scores down against anyone until I see a BYU defensive scheme that suggests a goal of disruption and urgency.

Boy, that’s sad but true. If I didn’t know better, I would think that BYU is a Utah type ball control team.
Correct me if I am wrong but BYU WAS very creative in the Utah and ASU games with their defense…I recall only one time that the proverbial drop back 8 was just in the ASU game, where I thought we totally bailed ASU out and made the game closer then it should of been.

To start the 2nd half of the USU game, BYU’s defense had USU 3 and out four consecutive times. Let’s go Cougs.

Our D was totally aggressive vs ASU. We all loved watching it. For the 1st half. Then we got ahead 21-7 at half with a chance to put them away, and of course came out after half in the soft 3-8 drop. Herm Edwards smartly recognized this and started running the ball, just like BSU and USF did when they saw the D raising the white flag and running backwards on the snap. We are lucky Allgeier saved the day, and I’m really really glad we caught ASU when they made so many mistakes. ASU legit LOST that game with all the penalties.

I read today that Hall is 100% healed, if he can bring his lethal running and Tuiaki gets creative on D, BYU has a good chance of being in this game…if not…curtains.

BYU has been killed in TOP the last 4 games. And it’s not because of our incredibly fast TD drives. It’s because 1) we intentionally concede yardage because we are too risk averse, and 2) we are TERRIBLE on 3rd down (for the same reason as #1). BYU is 91st in the NCAA in 3rd down defense, allowing a staggering 42% conversion rate. Baylor is 20th. That means Baylor stops teams on 3rd down, and BYU doesn’t.

Isn’t this all because of one thing? We play the Drop 8 defense that has no problems with 5-10 yard gains as long as they do not “hit a home run” type pass.

If our personnel is not as good as we think, then why did we use the blitzing in the Utah or the Arizona State games?

I am so confused as to what our HC and DC is thinking.

If Hall can run, I like our chances, if not, it’ll be a long day

But with Romney, it seemed to me that the offense was running pretty smoothly and played better.

But what do I know? I am still confused why we are still dropping 8 on defense.