Here’s my take:
If you have enough talent to beat USC and BSU, even with lots of backups playing, you have to have TERRIBLE, and I mean AWFUL coaching/scheme/preparation to lose to Toledo and USF. It’s clear as day that we beat BSU in large part because Kalani took the car keys away from his younger cuz and called the defense like he wasn’t afraid to lose; until, of course, he called the entire 4th quarter like he was terrified to lose, and almost threw away a sure win. Again, we have players–even backups–who can beat elite talent like USC, BSU, and, yes, even Tennessee, who, although they suck in the SEC, have elite athletes by the dozens. I was a fan of hiring Coach Ken, who has demonstrated excellence, on and off the field, in an environment with higher standards than even BYU. He wanted the job but Holmoe didn’t want him. So turn the page and hire Kalani. I’m ok with it. I don’t even think he needs to be fired. But we can’t be a varsity team with a JV defensive staff, and that’s what we look like, week in and week out. I’ve been swamped with my business and coaching my own program, and I’ve missed a lot of posts (sorry guys, keep 'em coming!), but I think it may have been Edwards who wrote the obvious: Kalani has to take over the defense, Tuiaki has to go, send Lamb with him, and get on bended knee to beg Kaufusi to come back. Problem solved. Again, just my opinion.

Actually, it was many others who suggested that before brother Edwards. Before you can fire someone during the season you have to have someone ready to replace him.

Before you can fire someone during the season you have to have someone ready to replace him.

Kalani is a known Defensive Coordinator, he has at least 10-15 years of experience as a DC. It is not uncommon for a HC to do both HC and DC, Bronco Mendenhall does it.

Second, I am not sure why Tom mentioned Lamb as someone that needs to go, because I really don’t think we had a LB problem, I think we had a defensive scheme problem, which is why we sucked against the run, look what the LB’s performance when Kalani took over. They did a great job, even though their key LB (Anderson) is out for the year with injury.

The key in my opinion is simple: Kalani finally had a “Come to Jesus” meeting with his players and coaches. There was no misunderstanding what Kalani said and meant. he changed coaches assignments, he changed players positions (QB, RB, Lineman, etc), some because of injuries, some because of lack of performance.

was a fan of hiring Coach Ken, who has demonstrated excellence, on and off the field, in an environment with higher standards than even BYU. He wanted the job but Holmoe didn’t want him.

From what I heard, Ken wanted to have BYU become a running team like Navy is currently. Tom wanted a more conventional BYU team (passing and running). Ken did not like the idea and decided to go back to Navy.

That is what I heard, but I am not actually sure that was the interaction between the two guys. You know how those faith promoting rumors start?

Mr. tlarimer, I would state that I concur with your comments but I am scared of being cryptic and negative (

: : ain’t stream of consciousness a hoot) IMHO, you are right on.

you know, you and grasshopper have a lot in common.

Kalani has to take over the defense, Tuiaki has to go, send Lamb with him, and get on bended knee to beg Kaufusi to come back. Problem solved. Again, just my opinion.

Unleash the Kraken. And please start Romney at USU. Man that kid can play.

I saw a few of your posts. You are a welcome addition to this board. Anybody who throws down with the #safetyfirst road construction reflective vest is OK with me (thanks for the memories, Larry Krystowiak

Romney was headed for 300 against an outstanding defense before our coaching staff inexplicably pulled the plug and decided to stop playing after the third quarter. I think he earned another start, regardless of who is healthy. He was poised, accurate, and didn’t try to force things that weren’t there.

Yeah, I just posted the same on another post then I read this. BYU radio had a big debate about this yesterday. My take: Hall had a concussion, why not let him rest one more game and see what Romney does against another very good defense. If he comes through @ USU, we may just have the best QB of the three.

No doubt Wilson has NFL talent but he is sooo immature at critical times. Hall? who knows but all I saw was Romney playing error free and making passes with great touch. Granted, the Oline played inspired with Grimes on the sidelines but tough times call of you to step up and coach/play your butt off.

I think what BSU taught us is that Kalani is the guy for BYU, his cuz is NOT, Grimes shows flashes but I am still concerned over the loses at Toledo and USF and our redzone scoring.

Maybe I’m too hard on Lamb, I’ll grant you that. Our LB play has been generally good since he got the job. I’m just not a fan. My main frustration is with Tuiaki, for an array of reasons, both on and off the field. I’m still super bummed that Coach Ken didn’t get the job. My understanding is that Ken wanted the job and would have taken the pay cut but TH didn’t want him (for the reason you noted). Kalani was my #2 choice. I love everything I know about Kalani as a person. I want him to succeed. But I know too much about the off the field stuff with this regime and I think Kalani better get assistants who create a MAJOR course correction, or they will all be gone anyway.

Floyd, I agree with Tom that Tuiaki has to go. Way too many missed defense opportunities that better coaching would probably fix. I like Lamb and I agree that he is not a problem. I would love to be at that “come to Jesus” meeting that I agree needs to happen (and I think WILL happen). I also think Romney has earned the right to start, regardless of who heals and when. BYU is a better team than their record shows and with the right coaching and player adjustments should become bowl eligible and finish the season well. Go Cougars!

YU radio had a big debate about this yesterday. My take: Hall had a concussion, why not let him rest one more game and see what Romney does against another very good defense.

Grimes was on sports talk radio today, he basically said both will get reps, and they will see who does better in practice and looks more ready to go. The decision won’t be until late next week.

Hall? who knows but all I saw was Romney playing error free and making passes with great touch.

I think Romney had an advantage over Hall, Kalani went “polar” on the team and reassigned both players and coaches. The offense was aggressive (At least for 3 QTR’s). I would like to see what Hall can do with those changes.

Agreed, I think Kalani taking over the DC is a good thing, I was afraid Kalani was going to lose his job because of his loyalty to his friend instead of his coaching abilities.

Everything else you posted is spot on.

This is the article that explained how Kalani went “Polar” on his players and coaches: 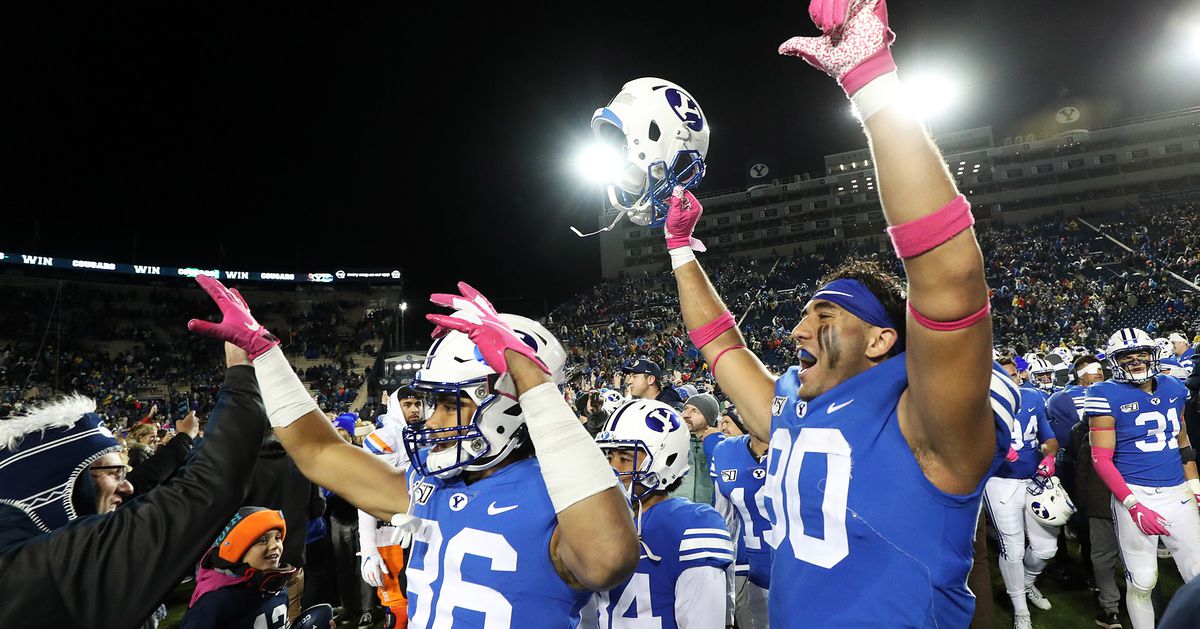 Cougars rally around coach to knock off No. 14 Boise State

With backs to the wall, BYU raced to a 28-10 lead over Boise State and held on to upset the No. 14 Broncos with aggressive plays, decisions.

On a slightly dif. note:

I am so laughing over this one. SO…CSU and the MWC are angry over BYU beating BSU and them being out of the payout of a NY’ 6 game.
Some girlfriends never get over being dumped.

Talk about cryptic and passive-aggressive. Wait, what the hell is wrong with me. I dumped this joint then came back, like in a trance. Here goes again.

LOL… Just giving you crap… Something to lighten a day.

Just giving it back Floyd. No real harm, no foul.

At the end of fall camp before the Utah game I said that this season would come down to 2 things: stop the run and 2) pass rush. Graduated players hurt us in both those areas. Our defense, in large part hasn’t done those things. So the season is a big disappointment.

I also admit that I said last year that Hall and Wilson were sooo close that I worried that the back up wouldn’t stay around after a year or 2. With that said, there is no way that Hall should get any snaps this week vs USU. Romney has earned the job until he shows that he can’t handle it. Wilson is done for the year. Hall may be needed, but for the short term, Romney is the guy.