too funny. I would have to say at this point (and we have not seen the brunt of this disease), the shut down of America is far more destructive then anything I have seen from C-19. It will take many months or years to ramp up our failing Restaurants, Flying and don’t get me started on the Leisure industry.
I think when all is said and done, we will look back on this flu and realize that it was no more dangerous then any other Sars. Meanwhile folks are losing their retirements and that will take years to rebuild. Social Media and fear mongering media are ruling the day and causing everyone, including governments to knee jerk.

I had stop coming to this site because of the comments of a poster. Makes the situation worse.

On a lighter side (sort of):
My daughter house flooded a couple of weeks ago because her dishwasher broke down.
Then we had this Virus thing that made it so she had to work from home.
then the earthquake yesterday.

She texted me yesterday to let me know she was okay and said:
Flood,
Virus,
Earthquake,
Just waiting for the Locust to come!

I hear some people in Utah are really freaked out about the virus situation and then the earthquake causing the part of the Temple to break. Those of you in Utah, is there a lot of angst and hysteria there?

I live in Sandy south of Salt Lake City and yeah it was nerve-racking along with COVID-19. So what next flood? I sure hope not. Hi Service the NCAA tournament this year.

You can not find TP in most stores. I have been looking for 2 weeks.

It is so crazy that most stores can not keep up with the hoarders.

For the most part, I have been good. The earthquake was a bit freaky.

My daughter on a mission was upset about the temple breaking. She was really worried because the Book of Revelation says something about that. Daughter is coming home from her mission in Spain tomorrow a month early. I mentioned that on a different thread. Can’t wait to see her. Though my wife says I can’t hug her because I’m still working while the wife and kids are home on various school breaks.

Floyd and others. Look like you can order toilet papers at Costco.com and it showed you can only order one package which is better than nothing. I have not ordered one yet but will tomorrow

Well never mind sorry about that but keep on checking

Finally found some… Only had to knock over two old ladies to get it!

Man, I find the board dead, what happened to all those medical experts that said the way people and organization were handling the Covid-19 issue was over blown, we should have had March Madness, etc… awful silent right now.

We have 350 Million people and that’s why we have so many. I think people are finding working at home is harder than they thought and takes more time and focus. Why are some countries finding so many are dying like in Italy?
I heard a doctor saying genetics plays a big part in why some get very sick and some don’t.

I worked from home on and off for over 20 years. I am more productive at home because it cuts out commutes to the office and all the senseless meetings you have to go to. The last 8 years I have worked in an office so getting to work at home is great for me (obviously I wish it were under different circumstance). I reach people at odd hours I normally can’t reach during normal business hours. I think it’s great and a lot of forward thinking companies do it as a standard way of doing business.It won’t work for all businesses, or all employees for any business, but for people who do most of their at a computer it makes sense.

The death figure in the US, so far, is 470 (I think Floyd’s number was a typo because if it wasn’t that would be an alarming fatality rate). I read the number on a US News and World report that was about 5 hours old. The number infected was correct at about 35,000. Honestly there are probably far more than 35k infected. With the known number of those infected the death rate is 1.34% which is about ten times higher than the flu. If we had real numbers on who was infected the death rate obviously would be much lower. A lot of people will get it and never get tested thinking they had a mild cold but they can still infect a number of other people.I have been told the death rate goes way up in the elderly. More than 20% for those over 80. The death rate in Italy is very high according to the last numbers I saw. What I remember is that it was over 6% and the vast majority of deaths among the elderly.

Italy has an older population and probably one reason for the high death rate, 9% of those who have gotten it so far, 0.1%… Hardly a pandemic.

I watch some of these fear mongering experts that are manipulating the numbers to create fear. Like in saying that it took 67 days to reach worldwide infected number of 100,000 people. Then, 11 days to add another 100,000 to that number and only 4 days to add another 100,000. What they didn’t say is for the first 67 days, there wasn’t much testing. After that, the world has been testing more people worldwide and that’s why the increase in numbers infected jumped so quickly. Instead, they say the virus is increasing more people at an increase that is alarming and could infect 70% of the world. It’s clear they are fearmongering and iI think I now know why.
The Senate Democrats have been introducing Green New Deal legislation into the stimulus bill going on in the Senate right now. I believe the worldwide socialists are using this virus to try and move their ideology forward. And, they don’t care who is financially hurt and who and how many die. That’s my take on all of this…

My mom who is 92 and her friend is sister Mansell call me they were at Smith’s Store nearest Sandy Library. So I guess it was you Floyd that you knocked down my mom. I will come by to your home later tonight to pick up those toilet papers OK Floyd?

Yea, I had to knock some knucklehead who was butting in line, but no old ladies…

Not sure that was a good idea for smiths, because everyone was waiting in line not 6 ft apart, waiting to get into the store.

No Floyd, this is wrong, according to CBS News 6 minutes ago: “ There are more than 43,600 cases across the U.S., with more than 550 deaths, according to Johns Hopkins University.” we very well Will get over 5000 deaths (and most likely more) but not close yet.

That number was as this morning. We jump uptown 40k+ just in one day.

The death # was wrong, I put what the world total at morning for the virus.

Really??? When? 5,000 deaths from this flu? We will have 80,000 from the other flu. This COVID 19 isn’t at this point an epidemic with these numbers.
Good news is that a concoction of Hydroxycholoquine, azythromiocin, zinc is working. A doctor on Hannity today said he’s treated 350 people and they all have gotten better. It’s goimg to be used in New York, California and Washington State starting Wednesday. It’s those big bad pharmaceutical companies that are going to save the fearmongers from their bogus numbers. 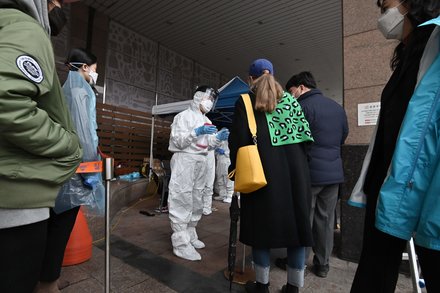 How South Korea Flattened the Curve

The country showed that it is possible to contain the coronavirus without shutting down the economy, but experts are unsure whether its lessons can work abroad.

That’s nice. Their mortality rate from the virus is just over 1%. So is the U.S. And, we have done it without heavy testing because of what happened after H1N1. That’s where Biden and his buddy Obama did not replenish the supplies used like test kits, masks and beds. We don’t even really know if the panic driven shutting down of America’s economy is what works.
But now testing if the drug, hydrochloriquine, azythromiocin, zinc starts in NY, Calif. and Washington State to cure the pneumonia that is caused in some cases that does the killing.