I may offend some here, but I’m a Dastrup fan. I feel he was mismanaged. Dave Rose drives off another player. But I guess you can’t argue with a coach who consistenly gets 22 wins, even though a good coach would get 28 with our schedule.

Where’s he going? Somewhere where he has to work hard in practice? They are doing some practicing and possibly others are doing better than he is and he doesn’t want to compete that hard. Go somewhere where he will start. That’s okay.

I don’t understand. That guy was one of our best 3P% shooters, with size, who had the ceiling to be something special. We lost him because we didn’t use him. If this turns into another Chatman situation, that will be very hard to swallow. I’m sick of watching Luke Worthington.

Luke - Lacks versatility on offense and fouls at unbelievable rates, low ceiling.
Andrus - I don’t know. Maybe? Is size at the 5 a concern?
Lee - Unknown, so a maybe, probably a back up 4 for the next 2 years.
Baxter - Definitely projects as a forward. Could start…of course he’s a freshman.

My guess is we’ll see a lot of 2 forward lineups without a true center. Will be a problem against Gonzaga and if we can’t beat them, what are we doing? Also, Dastrup showed large improvements from year 1 to year 2. The guy is obviously willing to put in the effort.

This is ridiculous guys. I can understand losing guys from the bottom of your program but this kid was a talented 4 star recruit. We are not kentucky, the only the way we will win is by building on continuity.

If the new guys coming in can provide spacing and defend without fouling, we might be just fine. I’m worried Rose is going to screw up the hand he’s dealt. You have to play the talented young guys to get them minutes and develop them faster.

I’m afraid it is time for Rose to go, as much as I like the guy. I feel like it is Mendenhall and his love for Riley Nelson. Playing the guys with heart, but no skill.

Again your scenarios have been so far off, it’s like you live in the twilight zone. This has been mentioned and predicted by so many, including Hawks, and you continually bury your head in the sand. Must be enlightening

I hear you and really don’t know what to say. It’s like Bill Murray and groundhog day and over and over again

I can’t remember a time so many players over the past few years have left the program. I thinks everyone knows their names and some of those players have been outstanding in a new environment. Whats going on? This kid was a four star recruit with a high ceiling, served a mission, and rode the pine for most of the time when he returned. I think he saw the writing on the wall… not much playing time ahead, and to be a big part of the program. He wants to go where he is needed and can be developed for a potential basketball career.

■■■■ Harmon of all people with a somewhat indicting article about the state of BYU basketball in general and Payton Dastrup’s transfer in particular. 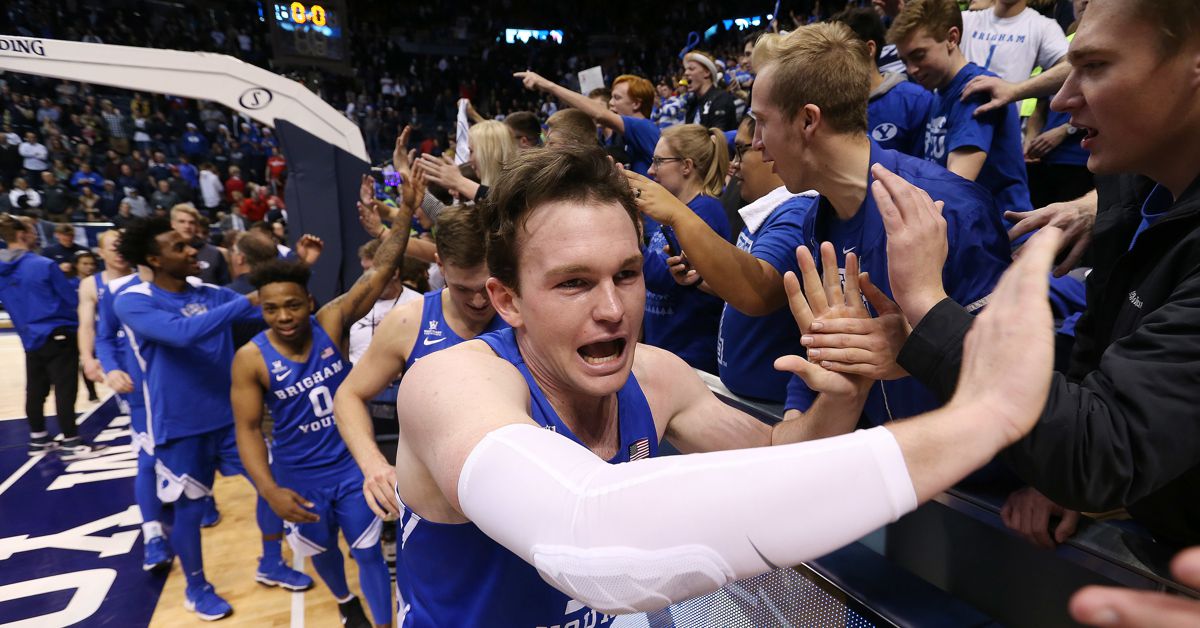 When Payton Dastrup announced he was leaving BYU to look elsewhere for minutes and playing time, it may not have been a big surprise, but it is a blow.

It’s hard to develop or play well when not given a chance. As ■■■■ says, “His minutes were always sporadic, without rhyme or reason, and rarely more than 10 or 15.”

I guess Richard needs to change his name.

As I understand, other teams have the same or higher turnover of players. The grass is always greener somewhere else. Some times it is. Most of the time it isn’t. Will it be for Payton? Depends if he works hard in practice this time.

I’m more concerned with the perceived quality of the transfers rather than the number of transfers. True BYU’s transfer rate is in line with the rest of college basketball, but as the following site shows, the star ratings of the transfers is overwhelmingly against BYU.

As you can see, most of the transfers at other universities were 2-star recruits, and the 4-star recruits are from pretty good basketball universities (LSU, Syracuse, Duke, Florida State) where another 4-star recruit is probably ready to take the transfer’s place. But, BYU seems the opposite: losing a lot of its best players each year (Dastrup, Toolson, Calvert, Chatman) while the headscratcher’s remain.

Dastrup Toolson Chatman all saw sporadic time. Toolson and Chatman have proven they shouldn’t have been getting the sporadic time. Bartley has too.That bench players transfer from BYU is not so inexplicable. That part time players who were due to get more minutes relatively soon transfer is of concern.

Dastrup is easily the biggest transfer loss in recent bball history for Rose…
A guy that bleeds so blue, who turned down a P5 scholarship with a coach known for developing bigs and competing for conference championships was a huge get for Rose. That he squandered him this last campaign in a completely lackluster campaign anyway is of concern.

Mika left too talented bigs leaving…Rose has not done well developing or using his bigs now for awhile.

Top echelon teams lose a lot of players to the pros. I have never seen the turnover of top players at BYU that has happened in the last 5 years. Something isn’t right in the program and I don’t know what it is, but it’s difficult to build a solid program in these circumstances. One thing for sure, is BYU will not be very deep this next year and very thin across the front line. Dastrup is a significant loss for this team.

Not sure about that. Dastrup left because he didn’t see his playing time going up. That means he’s seeing something in the players we have.
And, except for Chatman, who else left that ended up being an NBA prospect? Other teams are losing good talent and we’ve picked up a few of them like Bryant.

Time will tell, but talented big men r at a premium

I think we all know that Chatman and Bartley would have been starters this past year at BYU and two of the four best players on the team–BYU was an embarrassment from the 3 point line, against some of the worst competition in the country, and Chatman was one of the best 3pt shooters in the country, playing against the best competition. All FB4 did was exactly what Fish and I had been screaming from the rooftops he’d do at BYU if DR hadn’t buried him too. I am sad to say that in my mind I gave PD a 95% chance of transferring out. What DR did to PD last year–in a LOST season by a BAD team–was inexplicable and inexcusable.

What DR did to PD last year–in a LOST season by a BAD team–was inexplicable and inexcusable.

Play the guy because he has a high ceiling! If it costs us now, so be it, I’m more interested in developing these players early and then having a chance to dominate.

I’m gradually losing interest in the bb team. There is too much negativity with the team. I haven’t been impressed with Rose’s management skills the last 4 or 5 years. I hope for the best for them, but not optimistic. This will be Child’s last year and after that -pretty bare for big men. Bring on football-i think some will be surprised

I’m gradually losing interest in the bb team. There is too much negativity with the team. I haven’t been impressed with Rose’s management skills the last 4 or 5 years

There is still plenty of talent there and new talent coming in that keeps my interest fairly high but I have yet to run into a single fan that is happy with what Rose is doing to develop talent. I have said all along that when the fan base calls for your head, you don’t have very long.

Shame about Dastrup. we needed him last year and the answers the coaches gave me was shoulder shrugs. Players say that Rose does not talk to them after the season very much…very perplexing to me…If I was Rose, I would guaranteeing that Dastrup starts over Worthlesston. Guaranteed!!!

Interest can return in a hurry and Childs should be much improved, because he should be working hard to increase his profile to the NBA. I don’t see Haws getting much better, unless he gets stronger and not sure how Emery will look after sitting last year. On the plus side SMC will probably be down so I give BYU a reasonable shot at 2nd in THE WCC. I have to agree about Rose-another 3rd or worse in league and dismal NIT and he is gone. It is interesting to see new freshmen coming in and hoping for a real talent.