Game Thoughts The Morning After

More could be said, but most of you saw it so no point to it. The way we played was to me quite disappointing and it must have been for most who attended because that was the quietest crowd I have ever seen at the stadium. I hope with all my heart that what we saw yesterday wasn’t really what are team is about and was just a watered down version of what we can do and that the real team will show up next week. If that was not the case, not only next week, but the next 6 weeks, are going to be the most humiliating stretch of football that BYU will have gone through since the very early 70’s, as only Utah State would be a possible win.

I sure hope Ty has some more of that “imagination” next week against LSU. Perhaps they were holding back some of their playbook. Because our offense looked rather… vanilla.

I seriously doubt that the LSU game will be played. My brother lives in a high area in one of the Houston suburbs and has 2.5 feet of water in his house and it continues to rain and predicted to rain for the next 2 to 3 days. He has lived in his home for 20 years and has never had water in his house. Not even after Hurricane Ike went right over Houston.

If the LSU game doesn’t happen, it might be a good thing because from what I saw yesterday the team is going to need a whole heck of a LOT of practice for Utah.

Prayers for the whole Texas coast are needed.

Someone posted earlier about moving the game to another slot till Sept 23rd and reschedule Syracuse/LSU game till end of October open slots because of Hurricane Harvey. They could move the game to Tiger Stadium like NFL did moving the Houston/Dallas game to Dallas. Maybe but I don’t know if it would help us to improve for the next two weeks before facing Utah. Coach Kanlani & Ty did say we would not open the play book for Portland St.
I can’t say anything negative about the game yesterday but they better do better than that for next game.

I already have tickets to the LSU game, so selfishly I hope they still play the game. My Highschool had a game scheduled on Sep. 2nd and that is now cancelled. I am expecting the LSU game to be either rescheduled, relocated, or canceled all together.

Players just seemed to be real hesitant on both sides of the ball. With a couple weeks if the game is cancelled they should work on those things…

Rudi (frustration), Ben_Clarke (Perhaps they were holding back some of their playbook), Roy (Hurricane), dew (Coach Kanlani & Ty did say we would not open the play book for Portland St.), Ben_Clarke (I am expecting the LSU game to be either rescheduled, relocated, or canceled all together). grasshopper (Players just seemed to be real hesitant on both sides of the ball).

Yes, they were holding back on the play book, not wanting to let LSU see anything that could be a great play coming from BYU , as both Kalani and Ty stated before the game. Yes the team played very hesitant on both sides of the ball. It had to be frustrating to have weapons in your playbook that you were not aloud to use due to (top secret).

I believe that the last time we scheduled a game vs. LSU we had to cancel for some reason. I hope we do not have to cancell or be cancelled by LSU this time.

Rather than have the game rescheduled, or cancelled again, I do hope that we can have it relocated. With LSU ranked #12 and BYU #43, perhaps LSU would be willing to give up on the Neutral site plan and play the game at BYU.

Perhaps BYU could kick in some extra cash to the LSU team for coming to Provo. Perhaps both teams could, if the game is played in Prove, kick into the disaster fund to help those in need in the Hurricane path.

Perhaps the offense is just not that good. Tanner has to start reading the defense before the ball is snapped. Our running game is suspect. Our D line is suspect and the linebackers looked worse than the D line. Fred Warner won’t be playing in the NFL if he has another game as bad as Portland St. Where was Butch? Hadley was a little lost and Pulsipher showed us why he was replaced so quickly. D backs looked good. Receivers looked fine and the O Line looked already to block when we had a fullback in the game…I am hoping for a little miracle next week… We will need it. Game probably moved to LSU or New Orleans

The defense simply reacted slow. Warner was in the right places but him and his brother didn’t react to the ball well. Others too. Offense. I’m sure we will see a different look.

I hope the coaching staff spends some time recruiting in Fontana, California. This is where Jamal Williams played and now we have this guy named Takitaki, from the same place, that is tearing it up.

But then again, they want to make sure they win the recruiting battles in Utah, which is apparently more important than winning football games.

Make sure you get all those guys from Lone Peak…

Lots of Truth to that in a number of sports

If I was BYU I would agree to play the game anywhere but Louisiana unless neutral site couldn’t be found… It is supposed to be a neutral site game. Maybe Jerryworld in Arlington, Tx. is booked this Saturday but I would bet the Cotton Bowl in Dallas is not. Why not there? It is a large stadium and there are lots of Mormons in the DFW area. It wouldn’t be that much further for the LSU faithful to travel. There is also the Alamo Dome in San Antonio if it is not booked already. If I were Holmoe I would look for some other place than New Orliean or Baton Rouge and be proactive about it. Only play in Louisiana if all other venues are exhausted. They don’t have a lot of time to solve the problem. I hope BYU is working on it and not sitting back letting LSU call the shots.

There is no way one of the blue bloods of college football will agree to come to Provo to play a game that was supposed to be a neutral site game. It won’t happen. We were lucky to get them on the schedule and I am sure they felt like they were doing us a favor. I see no way they would agree to come to Provo even if BYU agreed to play 2 future games at LSU. BYU has to play the lap dog to the Power 5 schools. It will never change unless by some miracle BYU ends up in a P5 conference. It will always be a 2 for 1 deal, or a 1 and done deal and in some cases BYU will get stiffed after playing 2 road games and somebody will pull a Notre Dame on us and back out of coming to Provo.

As far as I am concerned they need to find another neutral site but when push comes to shove ESPN will call the shots and I bet it ends up in New Orleans unless they are dealing with flood issues of their own on Saturday.

what game were you watching? Warner was everywhere…if you are referring to the Pick 6? That thing looked for all the world like it just sailed threw his hands, an Albatross. Kind of reminds me of any ball thrown Trinniman’s way.

Really good linebackers don’t lose containment. Fred lost it 3 times. Prediction is that if he doesn’t dramatically improve, he will not be drafted.

Prediction is that if he doesn’t dramatically improve, he will not be drafted. 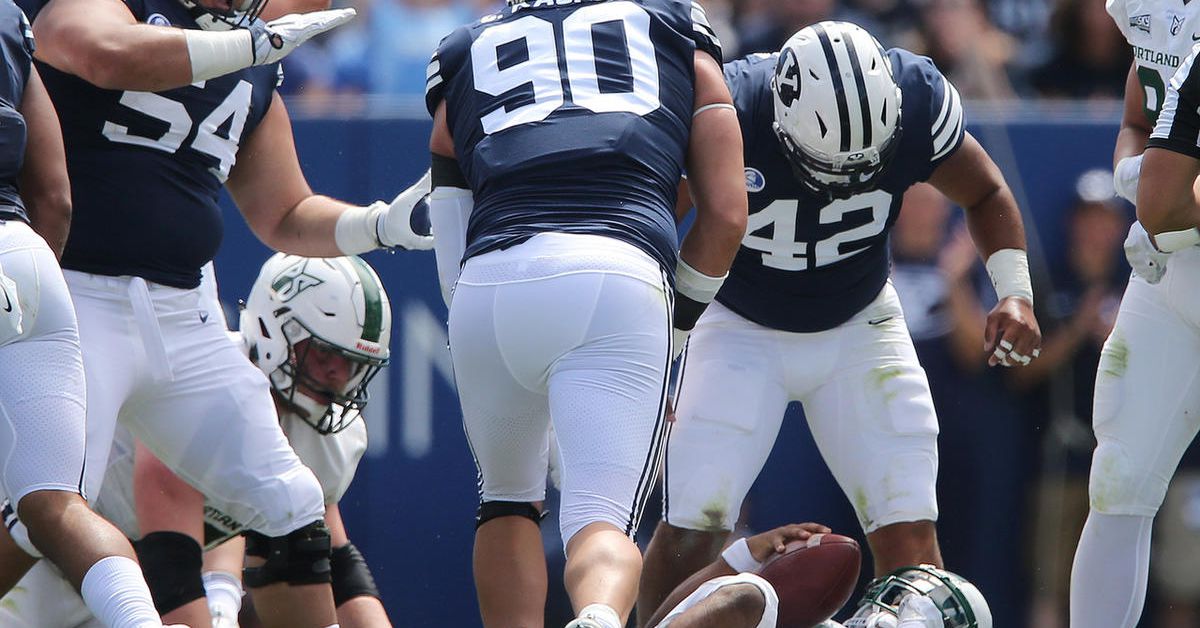 A look at the keys players and the important stats from BYU's season-opening win over the Portland State Vikings.

If I was BYU I would agree to play the game anywhere but Louisiana unless neutral site couldn’t be found… It is supposed to be a neutral site game. Maybe Jerryworld in Arlington, Tx. is booked this Saturday but I would bet the Cotton Bowl in Dallas is not. Why not there? 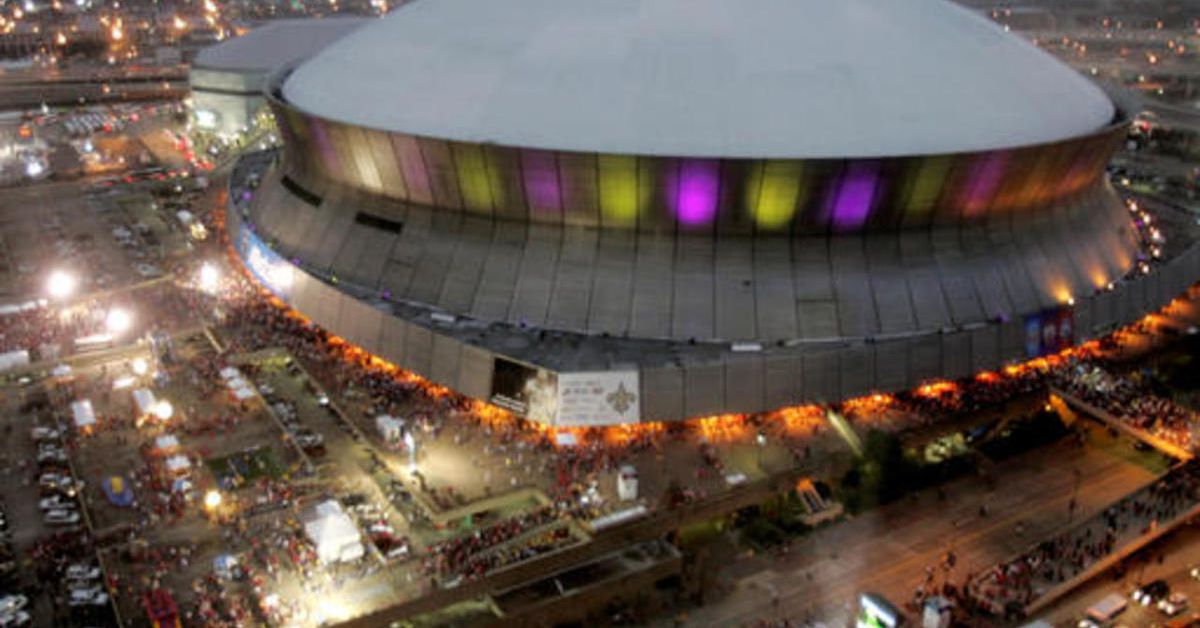 BYU vs. LSU: Breaking down the possible host cities

BYU vs. LSU will not take place at NRG Stadium in Houston on Saturday due to catastrophic flooding caused by Hurricane Harvey. While the Cougars, Tigers and ESPN figure out where to move the game, here's a breakdown of the possible destinations.

This is the most likely candidate to host BYU vs. LSU, all things considered.
Mercedes-Benz Superdome (New Orleans): The Superdome (not to be confused with Mercedes-Benz Stadium in Atlanta) has already expressed readiness to host this game, according to reports from New Orleans. This would be the mostly likely candidate if it weren’t for the heavy rain expected from the remnants of Hurricane Harvey. According to weather reports, New Orleans can expect 5-10 inches of rain, and flash flood warnings have been issued for parts of the city.

And they call this reporting?

Dessert News is never a realistic observer of BYU Athletics. Any other source would be welcomed. Warner had a very poor day. Wait until the grades come out on the team board this evening at the practice facility. I bet Warmer wqs graded very average by his own coach.

I agree it better not be in Louisiana! Three times (I think what I read yesterday somewhere) when there was a weather issue the game was moved to Tiger Stadium. Sorry they are especting more heavy rain and possible flash flood.
All we can do is stay tune tomorrow. I like to see this game be suspend until Sept 23rd at NRG.

well, this officially sucks. Lets get into a P5 already.

I read that Jerryworld is booked for another game earlier in the day, Florida vs. Michigan… The Cotton Bowl was apparently considered but some people think two big time college games in one day in the same vicinity is too many. Jerryworld is about 22 miles from the Cotton Bowl so I don’t really see what the big issue is. There are tons of hotels in the DFW area. The article said that AT&T Stadium (Jerryworld) is in Dallas and that Dallas could get crowded hosting two big games. Well AT&T Stadium isn’t in Dallas and the BYU game is a night game and the other game is a day game so I am not what the issue would be. AT&T Stadium is closer to Fort Worth than it is to Dallas so I think there is plenty of room in the DFW area to host fans for both games.

Since there is no chance the game will be in Provo, Dallas seems to make the most sense from the standpoint of being a neutral site. The New Orleans Superdome isn’t a neutral site and the weather for Saturday in New Orleans is a bit dicey. I don’t think one of the Florida sites is good for fans of either team. Nashville would be my second choice. Of course I have no say in it.