Recruited by Az, UCLA and about 30 others

Baxter, along with Childs are two pieces of the BYU puzzle that Rose has been missing for quite some time. 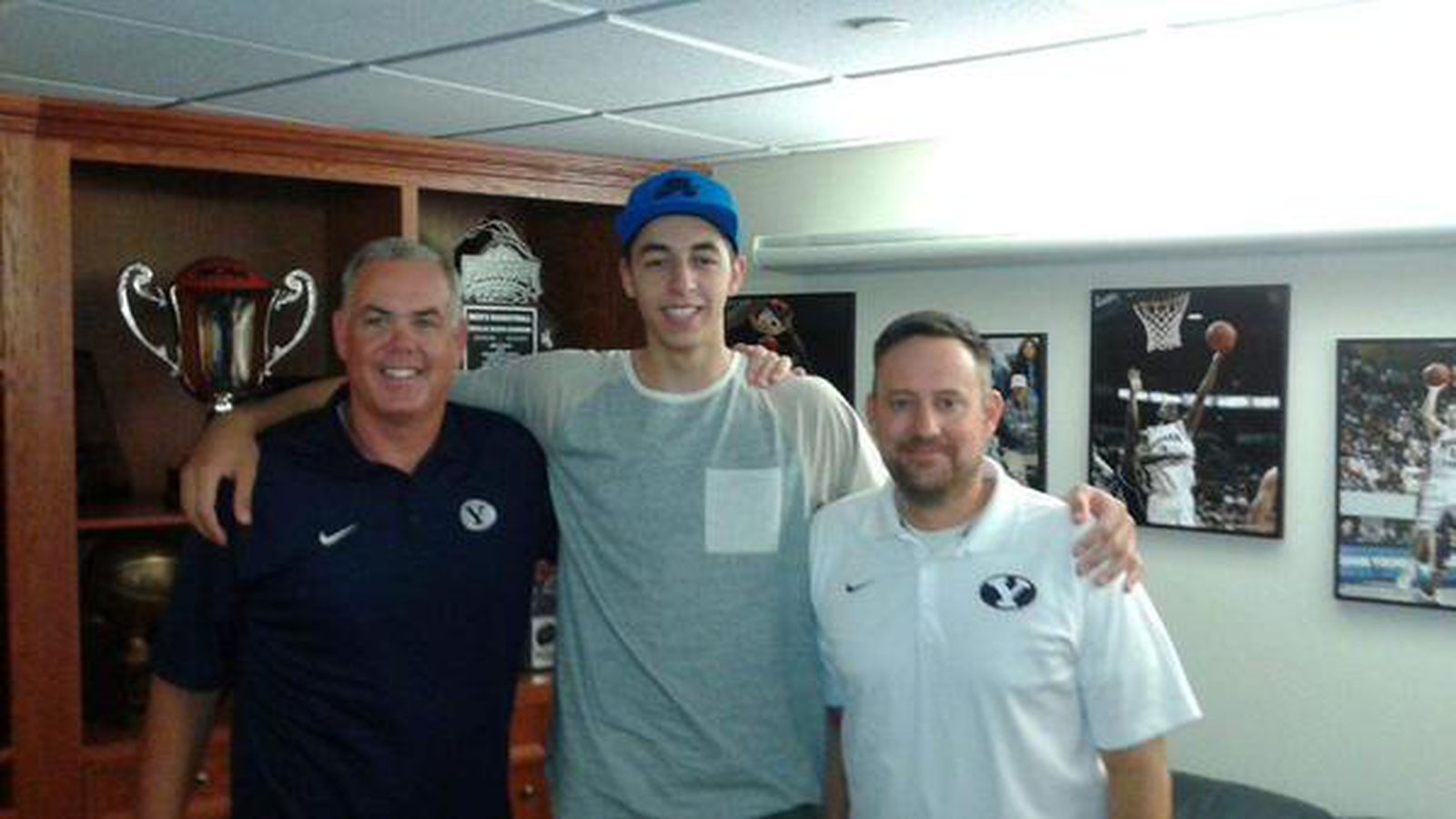 Gavin Baxter is a key piece of BYU's future

You may not have heard of him until this week, but you should be excited about the Cougars' latest commit.

Why hasn’t anyone said anything about this guy before? He has a kind of funky release on his shot, but he looks pretty athletic and he can jump, that’s for sure.

No more excuses for not winning the WCC. The team is going to be loaded for the next several years… NO EXCUSES.

All of the hype, all of the fanfare… there is no way this team shouldn’t take Gonzaga out behind the woodshed and deliver a serious beating.

So what will everyone say if/when it doesn’t happen?

Wow! Long is an understatement. Does he even need to jump to dunk? It will be two more years before we get to see him. We will probably all forget about him by then. It is always a fun surprise when a player comes home from his mission and we all think, “Oh yeah, I forgot how excited I was to get this guy!” We will be getting Seljaas back that season too so there is a lot to look forward to on the horizon. Thanks for the links!!

I have been talking about Baxter, all along. It is kind of like Dahstrup…here is a top 50 ranked athlete in the entire country that would normally be all over the news but BYU has this group called the LP boys and I guess that news just gobbles up the others.

Baxter does have a funky release but he shoots a high % 3 and a respectable FT shot of 67% and that release can be changed. What can’t be changed is that Baxter plays way above the rim and that he loves to dunk on everyone. Has great timing on defensive blocks as well. Given time for that 6’9 frame to fill out and Baxter has a very high ceiling.

The thing that is driving this crazy signing of all these highly ranked athletes would have to be that they all play on these AAU-elite travel teams and they all know each other’s game, been playing together since Jr high. When Lone Peak won the HS National Title, that was a game changer, all these guys want to play together.

A thought just popped into my head…

Is it possible that these players are seeing the potential to make something special in college, knowing that the nba is a long shot for all of them, regardless of how good they were in high school? Maybe TJ looks at Tyler and thinks - my brother was a star and he is in Europe… I could do the same but I want my degree too. Maybe some of the other guys see Jimmer and think - wow, he was a college star and he didn’t make it in the nba and some of these kids are starting to wake up to the reality that a good college education and some really good success in college is a nice way to go… that nba deal is like winning the lottery, it just isn’t going to happen. I hope some of them are recognizing that it is near impossible.

And don’t forget Yoeli Childs will be junior when Gavin Baxter comes in.

I think we need to stop talking about LP Boys. We should call it Utah AUU Guys.

Jim, you live in Caly. and this may be going on there to some extent but here in Utah there are certain high schools that are pretty much farm schools for D1 talent and for specific colleges.

I heard that Rice and to some extent Kruger, now at Ok. were supposed to recruit from a certain prep school (Findley Prep) and when Rice did not follow orders, he was canned. (Rice wanted players to play longer than the “One and Done” mentality of elite players from Findley.
http://www.findlayprep.com.prod.sportngin.com/about?_ga=1.226450524.793497819.1460755459

At any rate, Lone Peak is BYU’s farm school in both football as well as basketball. Timpview was BYU’s farm school for football until Witt’s brother took over the program a couple of years ago. Your point of these kids getting a degree over dreams of a pro career are well founded because after the Pro’s you still have to make a living. Two guys that I think could play on Sundays are Tanner M (football) and TJ…and they would be around 25 or 26 when they hit the Pro’s. Very old in today’s world.

Don’t forget who started the ball rolling, David. It was the Lone Peak boys and their committing way back as Fr and Sophomores. That would be 2 years before they won the national bball title. A common theme in all these top ESPN commits coming to BYU is who they wanted to play with.

I’m up in Northern California (Bay Area). De La Salle of Concord is the strongest football powerhouse in the state but there are more than 20 very good high school programs in California. Some of the best are private Catholic schools. Same holds true for basketball. By shear population (Utah = 3 million, California = 39 million), you know there are a ton of great recruits to be had.

I am not being disrespectful to LP guys. LPHS is our Pipe Line for both BB and FB to BYU which I am proud of. A lot of former players are mostly in Utah County and more so at Alpine Area. They are great get to have from other Utah School of Baxter and Childs to BYU. And hope for more to come. Man, I wish Basketball season would start now.

KSL just showed tonight that Frank Jackson got injured playing back east tourney tonight by going airborne landing on his back hard. Could not find anything how he is doing or where he is.

Yes, it has pretty much been going on for the last many years… probably since the turn of the decade or even sooner. It has kind of ruined high school sports to a certain degree. The funny thing is that everyone thinks their kid is the next million dollar pro athlete.

My son who is leaving for a mission to Panama in a month got so tired of it that he wouldn’t play his senior season of basketball because of the coach. The competition and attitude of coaches, players, etc. has made it not so fun anymore. Everyone knows who the best athletes are before they even reach high school now but yeah, the private schools and some of the bigger public schools have become farm teams for college sports.

Chris, there were a couple of those types of schools for basketball in Maryland when we lived there and virtually every kid went to an ACC school upon graduation. They were basically basketball magnet schools.

I saw that…Frank landed hard. Another athlete also had a bad injury.

Ya, I don’t see much wrong with his shot. Of course, the level of talent he’s playing against doesn’t tell the whole story but looks good.

Release is excellent. He just brings the ball up a little strange. But, reminds me of Fred Roberts shot.

I watched several of the high school playoff games this year. To me Baxter was the most impressive of all the BYU recruits coming out of HS this year. His team lost in the championship game, but he was by far the best player on the floor. He looked better than Childs to me. His timing was just a little off in the game, so he kinda had one of those games. Baxter, yea, that is the guy you want. He will need a little weight, but that guy, baring injury, is something special. I to, have been wondering why nothing has been said about him. I was almost reaching the point where I thought he may have changed his mind about coming. I was starting to become disappointed that maybe BYU missed a really good one. This is celebration.!!!
Jeff

Good news then it will be when he comes back from his mission and steps in to play.

But question about Childs. Did he get much time out of the wings or was he still stuck in the paint where he has essentially no shot at the pro draft?

Pro draft??? He hasn’t played a second in College and he’s in the pros already.

As I recall he was painted during the time I watched him. I recall thinking about all of the hype and thinking to myself, he doesn’t really look that good, but he did control the paint. At times I thought he looked a little slow. I am confident that Rose will whip him into shape. He ran the court ok but he did not look quick to me. There were a couple of good defensive plays and rebounds. He took up a lot of room in the paint. But that was HS kids. He might be a little bit of a project. There is potential there. It was not an outstanding offensive of defensive performance so it is kind of hard to judge.
I was very impressed with Baxter, he was always very involved on both ends of the court. He iniated very often his influence on the game. Effort was really good. His mind was in the game. He is a confident player.
Jeff

So, is he good or not? You were all over the place