Gonzaga says pat and what it means to BYU 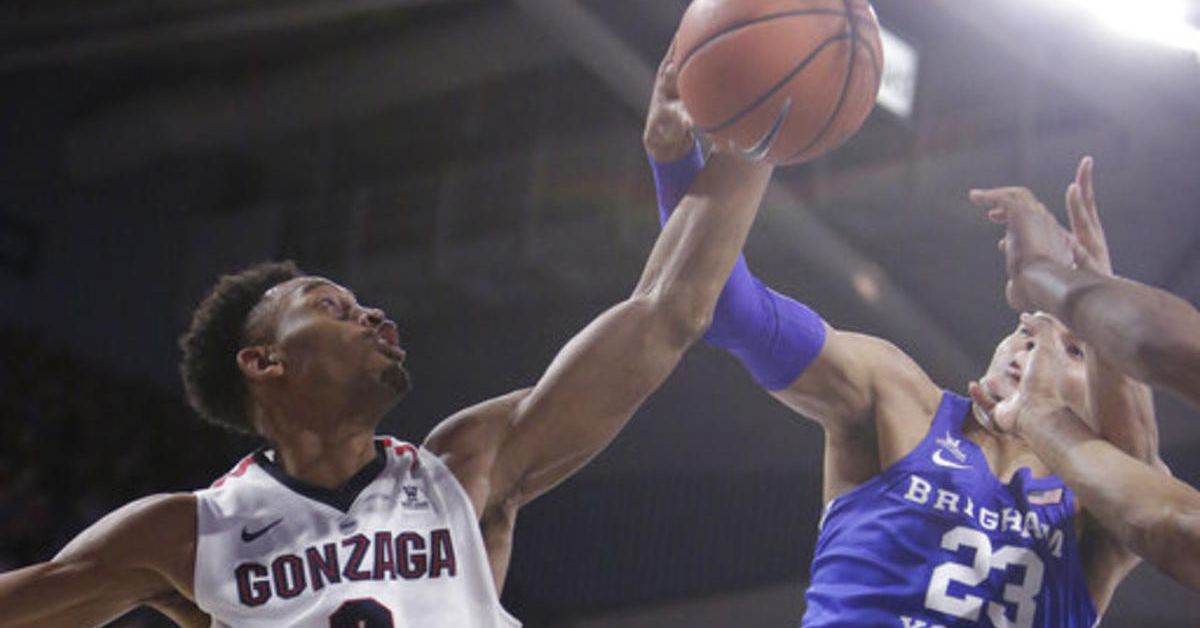 Harmon's Halftime: What was learned from Gonzaga's decision to stand pat with...

Gonzaga's athletic director made it official Monday, confirming the Zags were staying in the WCC at this time.

The points to consider here is:
The Mtn is far better fit for Gonzaga in terms of RPI and big gyms. So why did they stay?

Money and future payouts. Gonzaga knows what it gets with the WCC. the new commmish listened and made changes. Gonzaga wants more national exposure, competition and wants the rest of the WCC teams to up their RPI…By dropping 2 games from the WCC schedule, it accomplished all three points.

Gonzaga can now play 2 more big games in big settings, good paydays, helps the RPI and rankings. They are a big enough name that they can get 1and 1s in the dog kennel, problem solved.

What this means to BYU? How about the Maui invitaional for starters (just announced yesterday). BYU has complained for years about no one wanting to do a 1 and 1 at the Marriott so just go out and play more touniments and invitainionals. Two less WCC games is music to my ears…if we can improve our RPI with top 50 games. https://www.vanquishthefoe.com/2018/4/3/17191776/5-teams-byu-basketball-should-schedule-loyola-chicago-washington-boise-state-houston-nebraska

Not to beat a dead horse but losing Gonzaga to the MTN would have been disastrous for BYU no matter what anyone says. BYU needs needs them in the WCC.

I am also sure that clueless Thompson did not offer much of an insentive. FYI, if GU came knocking on my door, I would do whatever it took to make it happen. I also wonder if Coach Few will take this as a time to look elsewhere considering that he can write his own check in College or the NBA. Few has to know that he has gone as far as the Gonzaga train can take him.

He’s no spring chicken. He’s going nowhere. He has a great life in a great location. How would MWC be good for the size of their gym? They all have big gyms too. Their gym fits the WCC except for BYU’s gym.

Good news that GU stays in the WCC. Hopefully our best players stay at BYU next year!

I will be very curious to see if the other programs invest in their teams. Until the 7 Dwarves pay up, and they can, we will be stuck playing them. It wouldn’t be so bad if we didn’t lose to three of them.

Agreed on the tournaments. Lets do as many of those as we can. I would also agree to playing one and two series with some teams.

Still, we have to beat Gonzaga. So that’s the bar to clear. I think we have to be able to shoot over the top of them. switching on defense would also be useful…those 2 or 3 games should be our entire focus.

I will be very curious to see if the other programs invest in their teams.

here is another nugget I found.
https://cougarsportswire.com/2018/04/03/exploring-the-reasons-that-led-to-gonzaga-staying-in-the-west-coast-conference/

more points…The Mtn has a terrible TV contract. If you look at the Zags on TV, they are very much like BYU in that ESPN airs about all their games.

Since Few runs the WCC, he stayed pat. One last thing…Few loves to fly fish. Steelhead are his passion. Another reason why he has not left.

Don’t say that which sound small

Did it use to be called MAC “Marriott Athletic Center” and BYU didn’t like that and changed it to MC? Gonzaga McCarthy Athletic Center hold 6,000 seats and fans do come compare to other wcc schools.

The fans definately act poorly in the MWC and Gonzaga. Something Few needs to work in being in a religious league. I enjoy going to Pepperdine for games because their fans and employees are class acts.

Few doesn’t run the league just because he has some leverage as a winning teams. Even though Hawks thinks so

Few doesn’t run the league just because he has some leverage as a winning teams. Even though Hawks thinks so

Here is the title of the article that fish linked above. “Zags and Mark Few run the WCC more than ever before” I think it speaks for itself. Of course Gonzaga and Few own the WCC. I have been saying that for years. They are the golden goose and if it wasn’t for them, the league would be a complete joke and a disaster financially. Money talks grasshopper, what world do you live in?

BYU will NEVER win the wcc as long as Gonzaga is in it. It is a combination of the Zags controlling everything, (including the commissioner I’m sure) and Jimmer embarrassing them in the ncaa tourney all those years ago. They get what they want and the league is all too willing to give it to them.

So while Few yaps about the rest of the league needing to be better, he certainly doesn’t want them to be good enough to challenge his team for the title. It is a bummer for the rest of the teams but it is the truth.

What team wants to be challenged for the title every year. All teams want to win every year. It’s not fixed with some wild conspiracy with Sterns still in control of basketball conspiracies;-) BYU will contend this coming year. You’ll see

LOL! You’ve said this same thing every year for the past… as long as I can remember. Funny thing is there has been nothing to indicate this will happen, just like every other year when it hasn’t.

You are the boy who cries “grasshopper”…

We will have to see if Childs and Bryant return as they are expecting to. Also, who else will be on the team. Right now, it is looking very good

If BYU is trapped in the St.Zag WCC and don’t want to go back to the MWC, how about the American Athletic Conference? In basketball they have SMU, Houston, Memphis, Cincinnati, UCONN, and UCF. In football they have UCF, USF, Navy, Houston, Memphis. If BYU wants to wait another five or six years to get another crack at P-5 when the TV contracts are up maybe they could try the AAC in basketball and football, and keep the Olympic sports in the St.Zag-WCC

I get the sense that dominoes are being lined up for the big football TV deals and the rest will get figured out after that.

Would Coach Few ever consider coaching at BYU?

Well, let’s get him baptized and find out!

He would check out fly fishing in the Provo River first.

While he’s wading in the water we can hold him under and get him baptized. But then he would have to get his temple recommend to be head coach. People want to deny this but BYU and it’s satillite campuses and affiliates is the Lord’s University

Does anyone have a insight on the new assistant coach and former player? I will miss Shroyers intensity, he seemed to take over during timeouts this past year and seemed to have the attention of the players. In jest let me suggest for preparation for the small gyms in the WCC we could schedule in the BYU annex or Provo High for practice floor? I hope with the new 5 year contract the coaching staff will find players that will hang around for a while to reach the level of the Gonzaga bulldogs. Oh how I miss the players who have become outstanding at other schools this past year. I along with many of you who visit this page, miss what has been lost with this BB program. However, I would like to see Rose get the program where it needs to be as quickly as possible!

Lee Cummard was kind of an attitude problem as a player. I don’t have high hopes for him as an assistant.

Lee Cummard was kind of an attitude problem as a player.

One thing he can teach is how to continue the ongoing issues with the mental aspects of being successful in sports.

Having discussed this issue ad nauseum over the years, it is apparent that it isn’t a problem to the athletic department.

No service aces against UCLA. How can that even happen?