Jay Drew in my opinion is neither a lover or a hater of BYU. I find most of his articles pretty even keeled (unlike ■■■■ Harmon).

Here is his take on recruiting 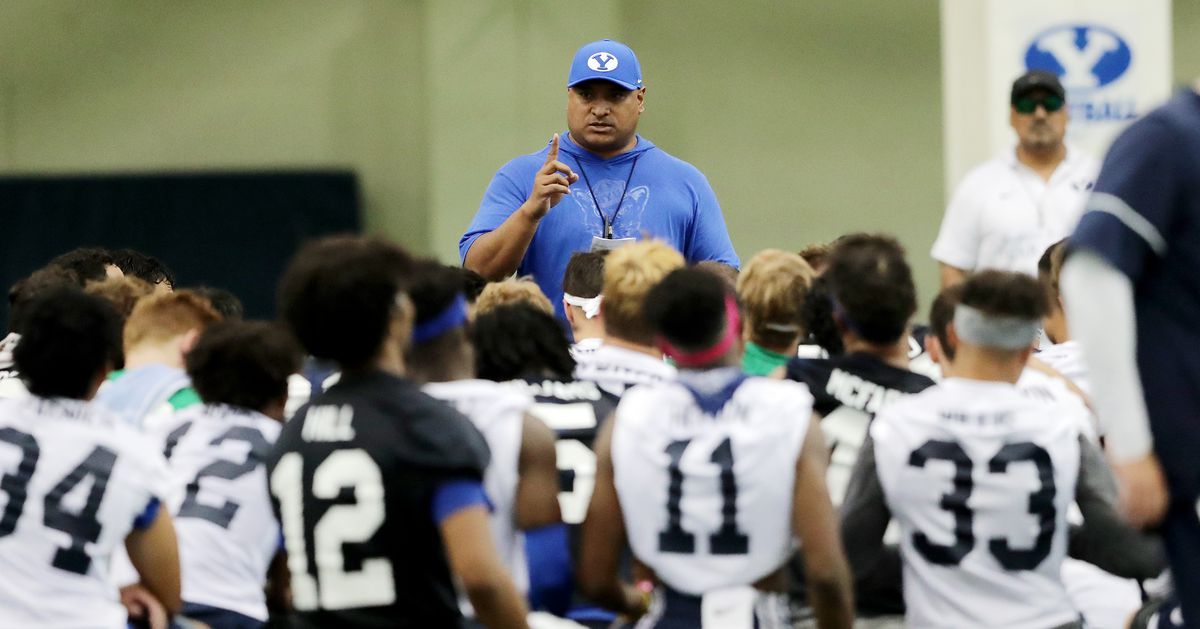 National recruiting websites are unimpressed by BYU coach Kalani Sitake’s 2020 signing class, one of the lowest-ranked in program history

Drew seems to be saying that despite lackluster signing classes the past 4 years, BYU fans shouldn’t be concerned (because of Williams coming last year via the portal). Huh?

Everyone is a critic. As if he or someone else could do better at BYU. Andy Reid couldn’t do any better since BYU has the honor code and high academic standard along with the revolving missionary door. We did well in this class with some real speed at WR and other areas as well.

Here is his take on recruiting

I listened yesterday on the BYU ESPN station: Their take:
BYU got the talent they needed, they were hurting at receiver, pass rushing, and RB. Sitake also said that they have several schoolies left for the transfer portal.

Got some great WRs. And the RB from Utah. Great find! Great recruiting class!

I believe the final ranking is 71st. which would be the highest in Sitake timeframe.

Tom Holmoe laid out on 1280 the Zone, why it so hard to get the star recruits to BYU, Admission Standards are as high if not higher than Stanford’s. A lot of the best athletes are not necessarily the best students.

Tom Holmoe laid out on 1280 the Zone, why it so hard to get the star recruits to BYU, Admission Standards are as high if not higher than Stanford’s. A lot of the best athletes are not necessarily the best students.

Yes- BYU is very unique, maybe the most bizarre place to recruit to. Standards are so sky high that even when a great talent wants to play here, they fail just on academics alone so Rankings don’t mean so much. Rankings also are skewed to P5 leagues. Case in point: A player is ranked a 4 star player but chooses BYU over, say, USC…that player is immediately downgraded to a 3 star.

Heading into next year, BYU has everyone intact on D an Olines. BYU is solid in the trenches. BYU has 3 exceptional QBs. They were hurting at Running Back, we got Devante from Utah. Replacing a lot of talent at Wide Receiver, we got some fast dudes signed there. Hurting at Pass Rush (DEs) got some help there and have 2 guys coming off missions that are exceptional but a year out.

One thing that has not been addressed is our D scheme, rushing 3 dropping back 8. I have been told that we had to do it last year because of all the injuries to DB. If that is the case, it may be that we will see a different look this coming year. I know we got some speedsters coming in and guys getting healthy at DB so we will see.

But overall, I would rank BYU’s recruiting a better then national polls…but not ready to pronounce that BYU is going to make some noise next year. So I am cautiously intrigued.

I see a 10 - 2 season. The WR could be fantastic this year. D will be much better. Offense too!

I WANT TO BE ABSOLUTELY CLEAR THAT I AM A LOVER OF BYU AND OF BYU FOOTBALL.

Having said that, I am also a critic when it comes to the degree of commitment that our Univesity/Church has for our Cougar Team.

So, faith without BYU football is dead? I’m sure that will get all of us at Cougarfan into the Celestial Kingdom.
The Church owns the school. So, your points about doctrine and morals are mute. Things like GPA are something the school can look at.

Our HC has to be a member of the Church in Good Standing.

I can see the reasoning for the HC. I don’t think having a HC as a member hurts, look at Lavell and Mendenhall, both ran successful teams. What made the difference was the Asst. Coaches who do not have to be LDS.

We pay only a fraction for our HC’s and OC’s and DC’s pay that
they could get on most any other team.

True, Pay is always a deteriment, but in the long run, it is not that important. Question: If Nick Saban and all the crap he does that violates NCAA rules, do you really want him at BYU?

[quote=“Ronald_Uharriet, post:9, topic:8614”]
We have a stronger Honor Code than most Universities. [/quote]
Not sure what other schools have tougher HC? I know the Academies do have some pretty strict Honor rules, The Irish has some, but no where near BYU.

It is next to impossible to get on the team with less than 3.0 GPA.

It’s closer to 3.5 now, and yes this is a a big determent for players. Although Tom Holmoe said on the radio, that they do a some exceptions they can use. Not that many, but a few.

[quote=“Ronald_Uharriet, post:9, topic:8614”]
Politically speaking, our stand on the LGBTQ community doesn’t help.[/quote]
I am not sure what this has to do with anything, personally I like the policy and support it.

Again, the reason that we are sliding is because the BOT has determine to raise the Academic Standards to that of Stanford. Along with that, Independence has it’s draw back. Although one of the 3 star recruits just signed, stated that was the reason for his selection.

Ron, you also have to remember that more and more schools are going after the top LDS athletes. When Lavell was coach, he was the only school that would allow a player to either go on a mission directly or after one year at school. NO OTHER School at that time would allow that. Now all the schools are seeing the benefit and targeting LDS players. That is why most of the top flight Utah high school players are leaving to go out of state.

Actually the key for success in my opinion is to develop a scheme that takes the talent of the current players and utilize them.

We have done that in my opinion. Now, if we could win the games against lesser competition. That’s what really hurts.
I don’t know why BYU has gotten so strict with GPAs. It really isn’t the greatest indicator of a student’s success at BYU.

I wouldnt mind if they moved all sports to BYU I and used the admission standards there. The Provo campus is totally academic and the students are much less inclined to attend athletic or other events than BYU-I. Almost complete focus on academic at BYU-P isn’t well rounded… football and basketball to Rexburg wouldn’t hurt my feelings at all.

Why not just lower the academic standards of BYU-P back to 3.0. No new stadiums or other sports facilities would need to be built saving the Church lots of money. That was a really lame and poor thought out post

Our recruiting ability continues to slide, and now is well below the
acceptable level for the competition which we now face.

Don’t agree. I think it is safe to say that we are holding our own and improving slightly.
When compared to Utah, your statement is true, BYU is far behind Utah as they continue to bring their program up to the top of the P12.

you don’t beat a Tenn, USC and BSU in the same year without having a pretty good recruiting program.

If they could move Lavell Edwards Stadium and the Marriott Center to BYU-I then I am with you.

The cost would be prohibitive. Silly…

“your points about doctrine and morals are mute.”

Interesting point of view grasshopper. The common phrase used in the 40’s and 50’s by the Church Authorities was,

“Faith without works, is dead”

The idea is that we must do our part to make positive things happen.

“you don’t beat a Tenn, USC and BSU in the same year without having a pretty good recruiting program.”

I agree with the above quote. The Problem is consistency

You don’t come close to looking like a P5 Independent when you lose in the same season to Hawaii, SDS, SFU, and (Liberty?), or if it wasn’t Liberty, what was the name of that other middle of the road G5 team?

“A lot of the best athletes are not necessarily the best students.”

Before I respond to the quote above, I must say that after, and especially during 33 years of teaching, I have come to the following conclusion:

We are not all the same in the way we learn, the way we achieve, and the way we show our intelligence or lack there of.

Having said that, trying to judge everyone’s intelligence according to their testing and their academic success, just doesn’t work for some of our students.

I have seen genius on the basketball courts and the football field that are lucky if they can read, write and spell on the 4th grade level, yet they could go onto play in the NBA or NFL and make millions of dollars per year. (Over achievers in areas of their interest)

I have seen gifted and talented students that could score high on test and read a semester text book in a single day with great recall ability, yet they can not hold down a steady job.

My feelings have always been that we should try to take a student as far as we can in the areas that he or she is most likely able to be successful in.