as well as improving some other areas with Timpview defensive lineman Logan Fano, Pine View’s Brooks Maile, South Summit offensive lineman Bruce Mitchell, Bingham wide receiver/defensive back Isaiah Glasker, and Weber defensive end Aisea Moa — who graduated from high school early to enroll at the winter semester after the Cougars [announced him with the early signing group of 2021] 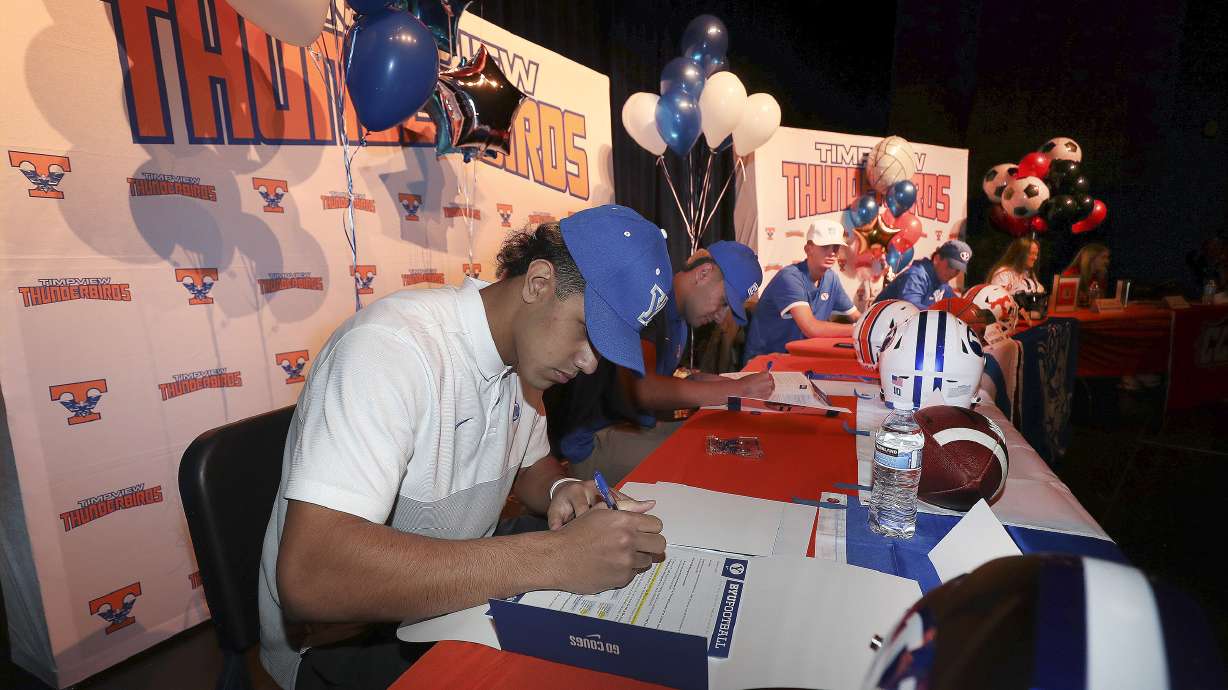 The Cougars added 16 players on the first day of the early signing period, highlighted by a surge of players in the trenches and on the defensive edge.

BYU is a Utah high school all star team but their best players are mostly from outside the state. I hope they recognize that. That’s for you Floyd…

Not anymore. So many Californians have move to Utah that your continuing attack on the youth of Utah.

Most on this list from Utah has at least 3 stars from the scouting reports.

ALL OF THEM had offers from other major P5 schools.

My philosophy is simply bring in the best talent regardless of what state they come from as long as they are willing to live the standards.

See unlike you Jim, Many College coaches has found that Utah is fast becoming known as place to find good college football players. We have kids one teams from Alabama to Stanford.

The kid transferring in from Oregon is also from Utah being a 5 star recruit.

Should I stay, or should I go? Gunner Romney opts to ‘run it back’ with BYU | KSL.com

Hilarious article, BYU signed plenty of pass rushers to drop back 8. my sides are hurting.

. my sides are hurting.

We could bring every 5 star defensive back and lineman and Ituaki would still do the drop 8 scheme because that is the only thing he knows!

We could bring every 5 star defensive back and lineman and Ituaki would still do the drop 8 scheme because that is the only thing he knows!

You keep ripping off that scab. Whitt lost that game because he is Whitt…Tui will stay on because we win 10 games but he will lose a BSU or CCU game because he has no heart.

You know at the end of The Sandlot when Benny The Jet Rodriguez steals home? It’s OK to admit we cried, and we didn’t cry because it was sad. We cried because it was inspiring. We cried because Benny The Jet believed in his talent more than the world believed in him, and had the stones to take a risk…and became a LEGEND…Tui is like the drone employee who just shows up at work and doesn’t ruin the company but will never make the company great. Tui is no Benny The Jet Rodriguez.

Benny the Jet Rodriguez was not a real person. That was a movie. Back to reality, we beat six P5s. That took a toll on the defense for sure and a bit on the offense as well. Let’s try to remember the defensive scheme in the first 2 or 3 games. It wasn’t mostly the 3-8 defense. We were rushing 4 and 5 on the line with blitzing as well. Go back and watch.

OH NO–WAIT! The Sandlot is not real? And all this time I thought it was a true story and James Earl Jones really lived next door to the vacant lot and had a dog that slobbered on baseballs…next you will try to crush my universe and tell me that Field of Dreams is also not a 100% true story and that The Natural really didn’t make a magic bat from a tree struck by lightning…

No, the others are real. You can relax now and not worry about the state of BYU football

See unlike you Jim, Many College coaches has found that Utah is fast becoming known as place to find good college football players.

Floyd always defending his pride and joy, the state of Utah.

Defend this - Not surprisingly, this is the No.1 cause of car accidents in Utah | KSL.com

I’m not going to lie, I actually like visiting Utah and there are so many good people there and great places to visit. The state is clean and I have lots of family there. I will admit that California is turning into a crud place but it is still beautiful with so much to do. Politics is our demise.

Let’s try to remember the defensive scheme in the first 2 or 3 games. It wasn’t mostly the 3-8 defense. We were rushing 4 and 5 on the line with blitzing as well. Go back and watch.

If what you say is true, why did it change? Why did BYU’s defense look so anemic and why did they allow opponents to put together long, time consuming td drives so often? Our offense could score but our defense was boring and not real effective from an overall game perspective.

OH NO–WAIT! The Sandlot is not real?

Who said? I know it was filmed in Rose Park at a ball diamond I have umpired.
Also know many of the kids who now or has played in the MLB.

I stated why. Comprehension problems again? Injuries boss, injuries. The 2nd and 3rd stringers could not run the complicated defenses the 1st team could. Had to go back to the 3-8.

Oh good grief! Look up the player. It was fictitious

Scott… Do you as Grasshopper know what “Sarcasm” means?

The 2nd and 3rd stringers could not run the complicated defenses

Then why are they on the team? They had at least a full year of practices to learn “the difficult scheme”.

That is lame, even for you Grasshopper.