I’m not surprised thaa he’s gone, but I thought he was headed to the NFL,

Quitters. BYU will show those losers next year. Hill said all would have to compete for playing time and these pinheads leave…

Is this a sign that Darrell Funk is losing his players’ trust? What’s the inside story behind the unrest?

Hill said all would have to compete for playing time

You do realize that Hill is the defensive coordinator and has nothing to do with the offensive line, right?

Is this a sign that Darrell Funk is losing his players’ trust?

I think there is more going on the offensive side of the field than Kalani is letting on. i think the massive leaving is a sign of disfunction within the organization.

Pop quiz: you are a great college OL, you have NFL size and you never get hurt. Your dream is to play in the NFL. You get to choose to be coached by Funk and Arod or Grimes and Mateos. Which do you choose? HAHAHAHA.

These are all potential NFL players and they are smart to enter the draft now (Freeland) or play for Grimes (Barringtons). In fact it Feels like an absolute no brainer.

The Barrington Bros gave BYU a lot and I’m grateful we had them. But they are just doing what is OBVIOUSLY best for their careers. I don’t blame the BYU Junior student who transfers to another school for a better program, whether it’s a science major, a music major, or a football major or any other major.

The O-line was so touted at the start of the season and then BYU couldn’t run the ball consistently for most of the season. Now we have great players entering the portal. Arod touted Darrell Funk as a “no brainer” hire because of his vast experience. My thought was that if he had so many years as OL coach, why was he never promoted to OC? Having decades of experience as an OL coach could mean you are very good after all those years of doing it or you were never good enough to get promoted. The fact that he coached at so many different schools could mean has gained a lot of experience or that he was exposed as a sub par coach and asked to move on. Now that we are seeing great players leave leads me to believe Funk is being exposed. Again, I have no basis for speculation other than looking from the outside inward.

Kalani is a nice guy but I get tired of his “nothing burger” interviews. Everything he says is so diluted that you can never get any indication of what is going on with the program or players. If the program is dysfunctional as you say, you would never hear a hint of that from Kalani. If Kalani has a dysfunctional program, maybe he’s the problem. I suppose that the “house cleaning” he is doing now is a sign that he recognizes changes needed to be made. I just don’t know if I have confidence that Kalani has the ability to fix whatever problems are happening with the program. This is the second time he has made major changes in his coaching staff. These guys were his hires so the buck stops with Kalani.

I don’t blame the BYU Junior student who transfers t

The question is “Why” would they? at BYU both Campbells were considered “All Americans” and NFL draft picks. So why the change?

Personally, I think that the atmosphere in the Football office is not as “family” as Kalani wants you to believe. Your best players (Conover, Campbell’s, etc.) don’t simply leave for “better opportunities” with a year or two of eligibility left. We are losing big recruits who committed then changed their minds. Something is off in BYU football land.

I am of the same opinion. Funk has been around a lot. He appears to leave programs no better than he found them. He ought to be on the block to be gone again.

could not agree more…This is the shoe that drops. Up until now everything has been focused on our defense. Now all eyes are on our offense and these transfers say a lot. ACE pointed out that we were very vanilla, Personally, I was soooo focused on our poor defense that I just plain had not formed a strong opinion on A-Rod but here goes.

The lack of use of our Tight Ends is criminal. For whatever reason, we have 3 highly touted recruits coming in. Rex is coming back. Are we going to continue to throw 1 ball a game to them???
Rex can be what Kelse is to Kansas City.

We have NFL talent at WR. Nacua is a shoo in. Before Epps was hurt, he led the team. Hill is certainly a talent. We should of gotten more out of our best receiving corps of all time.

Hall is a NFL talent. With his wheels, he certainly will play or at the very least be a solid backup. Brooks and the running core were good enough. And now we have NFL talent at the Oline leaving. We should of been much better. Should not have lost to ND, Liberty or ECU or Arkansas at home.

The big question is if you replace ARod, can you do better. Can ARod improve if he stays. Who is out there?

The big question is if you replace ARod, can you do better.

Coach Whitt let A-Rod go because of the same issues that you mentioned. His decision making is pretty weak, he also focuses on a few options for passing (Nacua, Hill, Epps). His adjustments are barely noticeable.

You asked, “Who can replace A-Rod”? Well, there is a very proven OC on staff right now, that helped Jay Hill turn Weber State around. His offense got the Wildcats to the championship game the year before he came to BYU.

His name is Fesi Sitake. Yes, he is Kalani real blood relation. But he proved before even coming to BYU he knew how to run an offense. They were slinging the ball all over the place at Weber State. Fun team to watch that year.

Kalani is a nice guy but I get tired of his “nothing burger” interviews. Everything he says is so diluted that you can never get any indication of what is going on with the program or players. If the program is dysfunctional as you say, you would never hear a hint of that from Kalani. If Kalani has a dysfunctional program, maybe he’s the problem.

How many years are on his contract? I seem to remember that he got extended twice. I really hope Holmoe doesn’t keep extending him. We need new leadership from the top.

How many years are on his contract?

His contract extends through 2025.

But remember, BYU is all about “Loyalty” according to some posters…

I do not think Kalani coaching style is the problem, I think he needs to hire “great” assistants to do the job. The problem that I see, and not sure if Holmoe or Sitake is at fault here, is that they hired all these coaches who were either friends/family or former players that had little experience at all. Some of them has turned out great (Unga, Gilford, Sitake) but some of them, not so much.

To the educated who can read, it does. I said pinhead(s), plural. I’ve heard recently the same from Sitaki on who will play. Now, do what I’m doing. My New Year’s resolution is to be more kind and thoughtful. January 1st is coming up quickly

Late in the season, BYU faced the best candidate for offensive coordinator: Paul Peterson at Utah Tech. I’d like to see Peterson hired this year as quarterback coach or offensive advisor.

Our recruiting class is ho-hum. I’ll call it the Tuiaki effect. BYU should definitely do better next year.

I’m not down on next year–at least not until the transfer portal signing ends. BYU has lost players but has the opportunity to rebuild and raise the overall quality of experienced players (But, yes, losing the Barringtons and Fanos hurts. An all-american is not going to coming to BYU via the portal…I don’t think).

I am very optimistic that BYU wins 10 or more games next year and will be in the Big 12 championship game.

I’m with you! Always be positive!

So, help me understand this:
We have two brothers who have earned all American honors while playing offensive line while BYU was independent.

Now they (assuming the brother follows his younger brother) transferring (via the Portal) to another team (Baylor) that is within the same conference BYU is going into.

This does not make sense, but I think either Coach Funk or A-Rod is causing issues with our “star” players. 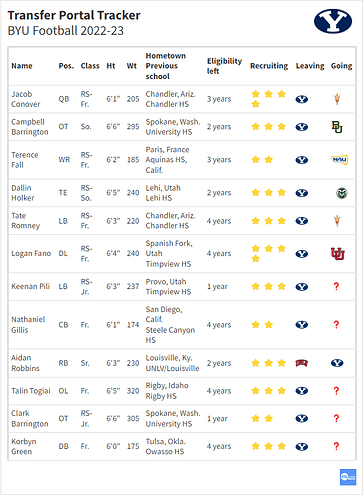 So BYU has the combined numbers of both Utah and USU in the transfer portal.